Yesterday, Israelis went to the polls for the fifth time in under four years. As with the previous rounds, I followed the results with trepidation. It's too early to know yet exactly what Israel's next coalition government will look like, but what we can see now does not bode well for Israel's future.

The politician who will put together the next governing coalition will shape the character of public life in the country and determine its future as a democracy and as a member of the family of nations.

According to initial election results available as I write this article, shortly after the polls closed, that politician may again be Benjamin Netanyahu, the man who has dominated Israeli politics for the past two decades.

Israel is a multi-party system with a 120-seat parliament, the Knesset. To form a government coalition, a Knesset member (typically the leader of the largest party) must cobble together a coalition of parties with a combined total of at least 61 Knesset seats.

Netanyahu leads Israel's largest party, Likud. If assigned by Israel's president to form a coalition, he will likely do so by including a political party that champions an ideology that until recently was regarded as unacceptable in Israeli public life. One of the party's leaders, Itamar Ben-Gvir, is a longtime follower of the racist, U.S.-born rabbi Meir Kahane. He still voices Kahanist views, although Ben-Gvir claims he is no longer a disciple of the Kahanist groups Kach and Kahane Chai. These are designated terrorist organizations, outlawed not only by Israel but also by the United States, Canada, the European Union, and Japan.

Ben Gvir has been indicted 53 times for violations that included racial incitement, violent acts and supporting a terrorist organization. He was convicted of eight criminal offenses that included such violations. Shortly before Israeli Prime Minister Yitzhak Rabin was assassinated, 27 years ago, Ben-Gvir stole the emblem of Rabin's car, presented it to TV cameras, and said: "Just like we got to this symbol, we can get to Rabin." A fellow ultra-nationalist Jew, Yigal Amir, did get to Rabin, assassinating him on Nov. 4, 1995, a date that many regard as the beginning of Israel's turn to the right.

Bezalel Smotrich, co-chair of Ben-Gvir's party, holds racist anti-Arab views and homophobic positions. In 2006, he organized a "Beast Parade" to protest Jerusalem's Gay Pride Parade, comparing homosexuality to bestiality. Smotrich has said that he would like Israel to be managed by religious Jewish law "as it was managed in the days of King David and King Solomon." 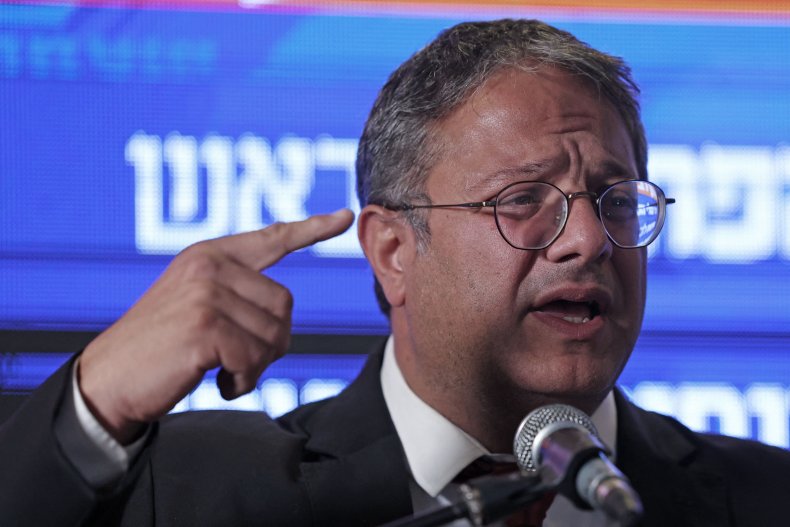 Israeli far-right lawmaker and leader of the Otzma Yehudit (Jewish Power) party Itamar Ben-Gvir speaks during a press conference ahead of the election, in Jerusalem on Oct. 30, 2022. AHMAD GHARABLI/AFP via Getty Images

From the perspective of integrity and respect for the rule of law, having Netanyahu as the frontrunner for becoming Israel's next prime minister is itself a serious affront. Netanyahu is currently under indictment for three serious criminal corruption offenses, including bribery, and may face further charges.

Netanyahu has already announced that he will strive to form a coalition with Smotrich and Ben-Gvir, together with Israel's two ultra-Orthodox parties. He knows that doing so could make it easier for him to pass legislation that may help him escape prison. Ben-Gvir already said that he intends to push legislation banning legal measures against a sitting prime minister. Ben-Gvir and Smotrich know that Netanyahu is their ticket to political power.

But how far is Netanyahu willing to go for political and legal survival. Will Netanyahu put his personal interests above the interests of the state of Israel? It certainly looks that way.

If he forms a coalition with the nationalist-religious extremists, the implications for Israel would be horrendous. Any hope for Israeli-Palestinian peace in the foreseeable future would be dashed. Such a government is likely to pursue policies that would slam shut the door on any possible settlement with the Palestinians. Israel's recent normalization agreements with Arab states and peace agreements with its immediate neighbors, Egypt and Jordan, would be jeopardized. Its international relations, including with the United States, Israel's chief ally, would suffer a deep crisis. Estrangement and alienation among American Jews would reach unprecedented levels.

Likely confrontational and provocative policies of such a government would give a push to extremists worldwide who seek to delegitimize Israel.

For me, a dual national Israeli-American who served as a soldier in the Israeli armed forces and now leads an American organization dedicated peace between Israel and its neighbors, first and foremost the Palestinians, this result would be tragic.

I hope that different coalition can be formed. I hope that Israel's political leaders will come together in pursuit of a different future. One that walks the path of peace. One that leads to a better future for their children, for Palestinian children and for all in the region.

But if that is not the case, I hope that those of us who are committed to peace, both in Israel and the United States, will redouble our efforts to put Israel back on the path to democracy, equality, and a better future.

Hadar Susskind is the president and CEO of Americans for Peace Now.