I'm writing this letter to those of you who knew, loved, or simply read the eloquence of Leibel Fein. Leibel died last night, and we are still reeling from this unexpected loss.

I am one of those people who subconsciously thinks in "Top Ten Lists" - it helps me prioritize life's overwhelming chaos. It turns out that Leibel makes all of the best of them - Top 10 writers, thinkers, joke-tellers, do-gooders (in the very best sense of the term), friends.

Leibel was brilliant. He had the rare ability to put his thoughts on paper in a way that persuaded, enlightened and altered your thinking, while all the while your mind was carried along by the beauty of his eloquence. He used words as an artist uses paint - it was beautiful and powerful, while the content was often courageous and bold. Those of us at APN were grateful that he was so generous with this gift.

He used this as he used all of his gifts - to fix the wrongs he saw. Oh, he didn't just write about them. He established networks, raised money, and provided vehicles to fix those problems. He saw hunger - he founded Mazon: A Jewish Response to Hunger; He saw illiteracy - he founded the National Jewish Coalition for Literacy; He felt a need to provide an ongoing diverse accounting of Jewish life - he founded Moment magazine; He saw the conflict between Israel and her neighbors - he co-founded Americans for Peace Now. He touched - and improved - the quality of life for so many that he was a powerful force for good in the crazy world we live in. And he did not just raise money for these causes, he gave his own. Some people live beyond their means. Leibel gave beyond his means. 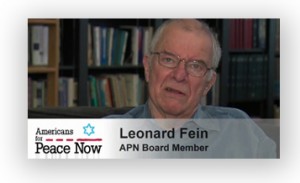 He was a generous man - with his time, his gifts, his resources, his compassion. And his humor. No APN Board meeting was complete until Leibel found an opening to tell a joke. Not all were funny. Some were delightfully inappropriate. But the joy and the (forgive the cliché) "twinkle in his eye" as he delighted himself in the telling as much as the rest of us in the listening, made us inevitably urge him on for more.

He was a modest man. No matter how many tributes he received, he always seemed somewhat surprised and grateful for them. While talking to me about his recent 80th birthday party, he shared that he was "in awe of" the many tributes friends and family shared at the dinner. How wonderful that he was able to hear these from those he loved the most.

Above all else, Leibel was a compassionate man. It was his compassion that drove his lifework in all of its various and expansive forms. Leibel said it best himself (no surprise here) in a recent piece he wrote for the Forward:

"I cannot claim that my words are hard and deep, but I want to offer one consolation, the consolation of action. Our rhetoric, our compassion, our empathy, our tears -- none of these, heartfelt though they be, is sufficient to the tasks before us. What is called for is to clothe the naked and feed the hungry, to hug the rejected; in short, to live, as best we can, righteously." We will miss this righteous man, who changed our lives for the better.

May his memory be a blessing.