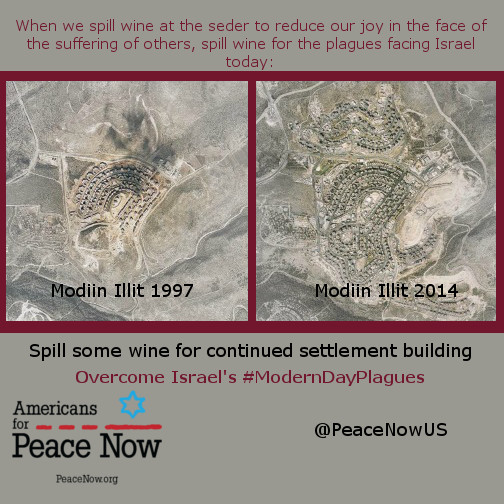 Traditionally, during the Seder, Jews spill some of the wine from our cups while reading the ten plagues, symbolizing reduced joy at the suffering of others. This week, in honor of the upcoming holiday, APN is offering suggestions of modern plagues to add to the traditional list: plagues that affect Israel today.

From the very first plague posted Monday, regarding the expansion of settlements, there has been an outcry from extremists who claim that APN is comparing other Jews or settlers to a plague. It is not surprising that these extremists would want to misdirect attention from the very real obstacle that settlement expansion poses to establishing peace for Israel, and to the very real suffering that settlement growth will cause to both Israelis and Palestinians who long for a peaceful future and an end to occupation. However, contrary to the right's assertions, APN does not refer to settlers as a "plague" and has never done so. Our problem is not with the settlers as a collective but with the Israeli government's policy of expanding settlements. We believe that it is severely threatening Israel's future as a democracy and a Jewish state.

Peace Now News Flash: Analysis of the Coalition Agreement between the Likud and the Jewish Home Party
We're the Antidote to the Extremists
Rawabi: A clear Israeli and Zionist interest
My Passover message: It would be immoral to give up
A Long Line of Worriers
Too many Americans advocate fighting to the last Israeli – I don't!
"It's too much of luxury not to speak with our enemies." A letter from Dror Moreh, Director of The Gatekeepers