Peace Now News Flash: Analysis of the Coalition Agreement between the Likud and the Jewish Home Party 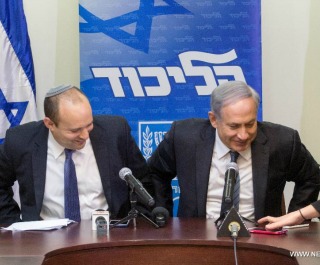 The coalition agreement between the Likud and the Jewish Home party (Bayit Yehudi) reveals the plans of the new government and indicates its intentions, including:

1. Granting the settlers control over the construction of settlements and over Israel's authority in the West Bank, while allocating more funds to the settlements.

2. Passing legislation and reforms that change the democratic rules of the game.

3. Allocating public funds to bolster the political power of the Israeli Right.

This agreement, which includes a Jewish Home stronghold on a variety of positions directly related to settlement development, constitutes a clear danger to the possibility of arriving at a two state solution and illustrates the true intention of the current government - massive settlement expansion and the silencing of opposition to the occupation.

Rawabi: A clear Israeli and Zionist interest
We're the Antidote to the Extremists
A Long Line of Worriers
"It's too much of luxury not to speak with our enemies." A letter from Dror Moreh, Director of The Gatekeepers
APN and Fellow Organizations Call on American Jewish Community to Affirm: Kahanists Have No Place in the Knesset
Leonard Fein, Mik Moore
Peace Now Settlement Watch News Flash: The Abu Nab Family Has Just Been Forcefully Evicted from Its Home in Batan Al-Hawal in Silwan