Watch: APN's Lara Friedman at Johns Hopkins - After Israel's Election, Who Makes the Case for Peace?

Watch the video below. 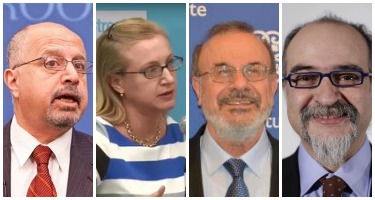 Is the peace process over, as critics of PM Netanyahu allege? Depending on what kind of a government Netanyahu forms, what are Israel's options for dealing with the Palestinian issue? How might Israel's settlement policies be affected by the formation of a "right-wing" government versus a "national unity" government?  Will the Palestinian Authority accelerate its campaign for state recognition in global organizations? And finally, what influence can the Obama Administration exert on the two sides?

Daniel Serwer (SAIS and MEI) moderated the panel discussion on these and related questions about the future of the peace process in the wake of the re-election of Netanyahu.

Lara Friedman is director of policy and government relations for Americans for Peace Now. As a leading authority on U.S. foreign policy in the Middle East, Israeli settlements policy, and Jerusalem, Ms. Friedman frequently meets and briefs members of Congress, U.S. administration officials, foreign diplomats, and other members of the foreign policy community. She is a frequent resource for journalists and policymakers, and regularly publishes opinion and analysis pieces in the U.S. and Israeli press. A former foreign service officer, she served in Jerusalem, Washington, Tunis, and Beirut, and is fluent in French, Spanish, and Arabic.

Ghaith Al-Omari is a senior fellow at the Washington Institute for Near East Policy. He is the former executive director and a non-resident fellow at the American Task Force on Palestine (ATFP). Previously, he served in various positions within the Palestinian Authority, including director of the International Relations Department in the Office of the Palestinian President and advisor to former Prime Minister Mahmoud Abbas. He has extensive experience in the Palestinian-Israeli peace process, having been an advisor to the Palestinian negotiating team throughout the permanent status negotiations, including the Camp David summit and the Taba talks. After the breakdown of the Palestinian-Israeli negotiations, he was the lead Palestinian drafter of the Geneva Initiative, an unofficial model peace agreement negotiated between leading Palestinian and Israeli public figures.

Ilan Peleg is the Charles A. Dana professor of government and law at Lafayette College and an adjunct scholar at The Middle East Institute in Washington, D.C. He is the author or editor of ten books, including Democratizing the Hegemonic State (2007) and, with Dov Waxman, Israel’s Palestinians: The Conflict Within (2011), both published by Cambridge University Press. He has also written a political biography of Menachem Begin, a book on human rights in the West Bank and Gaza, and a book analyzing the Middle East peace process. Dr. Peleg has served as a visiting scholar at Harvard University, Princeton University, the University of Pennsylvania, and in Oxford University’s St. Antony College.

Shibley Telhami is the Anwar Sadat professor for peace and development at the University of Maryland and a nonresident senior fellow at the Brookings Institution. His best-selling book, The Stakes: America and the Middle East, was selected by Foreign Affairs as one of the top five books on the Middle East in 2003. In addition, his most recent book, The World Through Arab Eyes: Arab Public Opinion and the Reshaping of the Middle East, was published in 2013. Telhami was selected by the Carnegie Corporation of New York along with the New York Times as one of the "Great Immigrants" for 2013. Telhami is a recipient of the Excellence in Public Service Award, awarded by the University System of Maryland Board of Regents in 2006, and the University of Maryland’s Honors College 2014 Outstanding Faculty Award.

Daniel Serwer (moderator) is a senior research professor of conflict management and senior fellow at the Center for Transatlantic Relations at the Johns Hopkins School of Advanced International Studies, as well as a fellow at the Middle East Institute. Formerly vice president for Centers of Peacebuilding Innovation at the United States Institute of Peace (2009-2010), he led teams there working on rule of law, religion, economics, media, technology, security sector governance, and gender.  He was also vice president for Peace and Stability Operations at USIP (1998-2009), where he led its peacebuilding work in Iraq, Afghanistan, Sudan, and the Balkans and served as executive director of the Hamilton/Baker Iraq Study Group. Serwer has worked on preventing inter-ethnic and sectarian conflict in Iraq and has facilitated dialogue between Serbs and Albanians in the Balkans.