"We are happy that an interim agreement with Iran has been concluded in Geneva.

"We congratulate the Obama Administration and its international partners for this important achievement and welcome this demonstration of a new Iranian readiness to seriously negotiate the future of its nuclear program.We believe that anyone who cares about U.S. national security, the security of Israel, and stability in the Middle East should likewise welcome this agreement.

"This interim agreement is, of course, only a first step.However, it is a step that opens the door for a potential final agreement that can at last resolve U.S. and international concerns about Iran's nuclear program. These include serious and very legitimate Israeli concerns about a potentially nuclear-armed Iran. Such an agreement holds the promise of a more secure and stable Middle East, and could have positive impacts outside the region as well.

"As an organization that primarily focuses on peace and security for Israel, we are fully reassured that the Obama Administration's negotiating strategy takes into consideration Israel's national security interests. We urge the Administration to make clear to the Israeli public that this is the case, and we urge the government of Israel to shift gears, cease public attacks on the negotiations and the agreement, and give diplomacy a chance. Israel's interests are unquestionably best served by a negotiated agreement that averts war and prevents Iran acquiring nuclear weapons.

"We appreciate the fact that the Senate held off on new sanctions in advance of this latest round of negotiations. By doing so, the Senate allowed diplomacy to do its job and achieve an enormous breakthrough. We now urge Congress to stand with the Obama Administration and its partners in the international community in support of continued negotiations to achieve a final agreement with Iran. This means refraining from pursuing legislation that would impose new sanctions on Iran or otherwise seek to tie the hands of U.S. negotiators as they continue with their historic and momentous task of hammering out a final agreement with Iran.

"As has been made clear, the pressure has not been taken off Iran; far-reaching sanctions will remain in place until and unless a final agreement that is acceptable to all parties is achieved and implemented. Those who would now insist on pursuing additional sanctions will send a signal that, rather than supporting this kind of negotiated solution, they believe the only acceptable "deal" is one that consists of Iranian public humiliation and capitulation. Such an approach will not strengthen the hand of U.S. negotiators, as some have suggested, but instead will discredit diplomacy, isolate the U.S., and erode the carefully built international consensus that is central to the existing Iran sanctions regime. It will also undermine Iranian moderates and strengthen hardliners, while bolstering a very reasonable Iranian conclusion that what the U.S. is after is not policy change, but regime change. Such a conclusion could well lead Iranian authorities to decide that crossing the red line and obtaining a nuclear weapon is necessary for deterrence and regime survival.

"In short, seeking to undermine or constrain diplomacy at this juncture would mean putting the U.S. on the path to a war that is more likely to ensure, rather than prevent, a nuclear-armed Iran - and a war that could have far-reaching negative consequences for the region and the world. Diplomacy is the only tool that has any chance of coming to grips, decisively, with the Iranian nuclear challenge. The Geneva interim agreement demonstrates that sincere, determined diplomacy can deliver results. Any efforts to now derail or undermine the continued diplomatic effort that will be needed to get to a final agreement must be rejected." 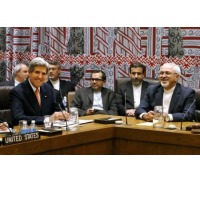