Netanyahu, Decoded: The Only Good Iran Deal is No Deal (op-ed)

Israeli alarm over Iran's nuclear program is wholly legitimate. Israeli skepticism about Iran's intentions in negotiations is natural, as are its fears that Iran will exploit an agreement to move ahead with dangerous plans of its own. Indeed, all of these concerns are shared by the U.S., others in the Middle East, and nations around the world.

That's why world leaders are coming together now in Geneva: not to try to simply get an agreement for the sake of an agreement, but to get a deal that addresses all of these concerns, one that verifiably limits Iran's nuclear program and nuclear ambitions now and in the future - something that would be very good for Israel.

Unfortunately, it appears that Israeli Prime Minister Netanyahu doesn't see it this way.

Netanyahu's latest public diplomacy offensive denouncing the brewing Iran deal is telling. Framing his position in terms that have been previously articulated by Secretary Kerry and others, he has been reminding the world, repeatedly, that, "no deal is better than a bad deal." Now, with a deal in Geneva appearing closer than most people imagined possible, he is warning in melodramatic tones that what is being discussed is: "a bad deal. A very, very bad deal."

Netanyahu's criticism raises two questions. First, how can he be so certain that the deal under discussion is "very, very bad," given that Israel is not party to the negotiations? Second, from Netanyahu's perspective, what would a "good deal" with Iran look like?

The answer to both questions lies in the very clear public pronouncements by Netanyahu about what he views as the minimum that must be required from Iran: a total dismantlement of its "nuclear weapons program." Decoded, this means a total dismantlement of Iran's nuclear program: zero enrichment, zero research, zero nuclear activity. This perspective, shared by Netanyahu and others, appears to be predicated on the view that the Iranian regime, being an implacable, irrational foe of Israel and the West, will never truly change its policies and its malevolent goals. What follows is the conclusion that what is needed is regime change - ideally sparked from within, but, if necessary, from without.

With this position as a starting point, it is clear why Netanyahu thinks the deal under negotiation in Geneva is "very, very bad," even if he doesn't know all the details. A deal, by definition, involves each side giving something and getting something. Netanyahu has been very clear: Iran must give everything, and until it does, and until it has proven it has no intention of resuming its evil ways, it should get nothing. These are not the terms of a negotiated deal; they are the framework for an imposed document of surrender, to be signed by Iran.

The current negotiations with Iran are a test, not only of Iran but of the U.S. and other countries involved in the talks. If the parties fail to reach a deal because Iran, in the eleventh hour, proves unwilling to accept what most of the world views as a reasonable agreement, then the current strategy of pressuring Iran can continue and will likely escalate, with even greater sanctions and louder threats of war. However, if talks fail due to Netanyahu-style demands on Iran - demands that virtually the entire world views as unreasonable - then the possible results include the erosion of the existing sanctions regime and an acceleration of Iran's nuclear efforts, as it becomes clear that the true goal of pressure on Iran is not policy change, but regime change.

On the other hand, if the parties in Geneva succeed and get a reasonable agreement - one that includes realistic "gives" and "gets" for all sides - then diplomacy may well have averted two outcomes whose potential ramifications would be perilous in the extreme: a new war in the Middle East over Iran's nuclear program, or a nuclear-armed Iran. For Israel, this would be good news indeed. 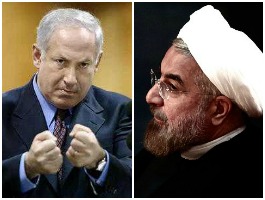