This week, Alpher discusses whether the Geneva agreement between the P5 + 1 and Iran is a "bad deal" and a "historic mistake" as Netanyahu argues, what about it should realistically worry Israel, what we have learned over the weekend regarding Israel's relationship with the Obama administration, whether Netanyahu's strategy regarding Iran and the international community has failed, what all this may say about the election in recent days of Yitzhak "Boozhi" Herzog to head the Labor party, and whether Netanyahu's invitation to Palestinian President Abbas to speak to Israel's parliament his inviting himself to a reciprocal appearance in the Palestinian parliament is a serious initiative.

Q. Is the Geneva agreement between the P5 + 1 and Iran a "bad deal" and a "historic mistake" as Netanyahu argues?

A. No. It's the "least bad deal" we could anticipate and, under current circumstances, it's better than no deal at all. It freezes Iran's nuclear program and even sets it back slightly for the six-month duration. It imposes far stricter monitoring of Iran's nuclear program than in the past. And the price it pays Tehran in terms of relaxed sanctions is minor, ensuring that Iran will continue to "hurt" until further notice. True, the agreement, using ambiguous language, appears ultimately to legitimize Iran's right to enrich nuclear fuel despite United Nations prohibitions--but few observers deluded themselves that Iran's nuclear clock could be turned back 100 percent. Thus this agreement is important, but modest in all its dimensions: duration, sanctions relief and limitations on Iran's nuclear program.

Q. Then why the furor?

A. I would argue that the reaction generated in the Middle East by this agreement--from Israel to Saudi Arabia--turns on much heavier issues than the agreement per se: Iran's future regional and global status; the international attitude toward its subversive and threatening posture in the Middle East; relations between Israel and the Obama administration; and Netanyahu's record of success and failure at the strategic level.

Q. Let's start with the question: what really should worry Israel?

A. Iran was already a nuclear threshold state before this agreement was signed early Sunday morning in Geneva. While the agreement more or less freezes Iran's nuclear capabilities, one Israeli concern must be to ensure that the comprehensive pact to be negotiated in the coming six months moves Iran farther away from threshold status. If, in contrast, Iran's newly-formulated interim status is merely formalized by a long-term agreement, this would be bad news.

Secondly, the Geneva agreement says nothing about Iran's aggressive stance toward the region. Iran is becoming entrenched on Israel's northern borders, in Syria and Lebanon. It is far and away Iraq's most influential--if not hegemonic--neighbor. It strikes a subversive pose regarding the Shiite minorities (in Bahrain's case, majority) in the Gulf emirates and Saudi Arabia. On the eve of the latest Geneva round, Supreme Leader Khamenei called the Israeli "regime" and leadership "rabid dogs", thereby echoing years of threats to destroy Israel.

Nothing is said about any of this in the Geneva agreement. The Khamenei statement was met by the 5 + 1 with, at best, mild reprimands and a refusal to let it get in the way. Essentially the international community, led by the United States, is intent on dealing with Iran's (nuclear) capabilities, not its intentions toward Israel and the region.

A charitable explanation of this pose would argue that the Iran experts of the 5 + 1 believe that a nuclear deal and sanctions relief will empower the moderates in the Tehran political structure and defang Iran's own hawks, thereby ultimately ending threats against Israel. Undoubtedly, moderate Iranians are feeding this impression: at a Pugwash nuclear arms control meeting in Istanbul a few weeks ago, some of the Iranian participants reassured Israelis in attendance that Iranian rapprochement with the United States would of necessity bring about a major relaxation of Iranian-Israeli tensions as well.

Israel's fears regarding Iran's intentions are real and sound. Those intentions must be addressed in the coming six months of negotiations. Israelis just commemorated the Yom Kippur War of October 1973, in which Israel was caught by surprise at least partially because its intelligence establishment was focused on Egypt's perceived capabilities and ignored its declared intentions.

Israel also has legitimate concerns lest the very limited sanctions relief embodied in the Geneva agreement turn into a slippery slope of renewed international commercial ties with Iran. And Jerusalem is justified in fearing, based on international precedents in North Korea and elsewhere, that the new, tighter inspection regime will not prevent Iranian cheating. It is up to the P5 + 1 to ensure that ongoing sanctions and tougher monitoring are administered seriously.

At the broadest level, are we looking at the beginning of a new set of relationships that brings Iran back into the international community and crowns it a primary regional player and a new-old friend of America? If so, what does this mean for the rest of us in the Middle East? How would such a dynamic interact with the Obama administration's drive to radically lower America's military profile in the region? It's much too early to answer these questions, but they are definitely on the minds of leaders in Jerusalem, Cairo, Amman and Riyadh.

Q. What have we learned over the weekend regarding Israel's relationship with the Obama administration?

A. President Obama and Secretary of State Kerry succeeded in marshalling the world's most powerful nations to enter an agreement with Iran that the government of Israel vehemently condemned. Obama and Kerry are even risking the opposition of Congress, egged on by Israel and AIPAC. But they appear to have the support of the American public, which has lately been dissatisfied with the administration over the healthcare fiasco. Assuming the Geneva agreement is seen to succeed and congressional opposition proves ineffective, the entire dynamic could affect the way Kerry approaches the thus-far low-key Israeli-Palestinian final status negotiations.

This suggests that the administration might now not shy away from a confrontation with Israel over the Palestinian issue. On the other hand, Netanyahu is likely to cite his concern that Geneva is bad for Israeli security as a rationale for rejecting any sort of risk-taking regarding security with the Palestinians, even if an empowered Kerry insists.

Q. Has Netanyahu's strategy regarding Iran and the international community failed?

A. Netanyahu succeeded in pushing the international community to tighten sanctions against Iran to an unprecedented degree. Up to that point, his strategy succeeded. But now he confronts the almost inevitable outcome of a successful sanctions regime: Iran has elected a more moderate president and the Iranians are prepared to deal. To a degree, even Netanyahu's angry performance two weeks ago, which helped shelve a more lenient Geneva deal, can be justified insofar as the eventual agreement is better from Israel's standpoint.

But now that the deal is done, Netanyahu would be well advised to cease the angry histrionics and play a more constructive role. He should seek close coordination with the US in the coming phase in the interest not of preventing a comprehensive agreement but rather, and declaratively, of getting the best agreement possible. Certainly Obama's phone conversation with Netanyahu on Sunday seemed to reflect American willingness to move on.

The destructive side of the Israeli prime minister's tactical approach was already evident in September when he angrily rejected Jewish New Year's greetings from Iranian FM Zarif and instructed Israel's UN delegation, alone, to walk out on President Rowhani's inaugural address. Even if it emerges that the Iranian smile campaign is indeed a cover for Tehran's aggressive designs on the region, that sort of response is hardly the way to expose it.

Finally, thus far Netanyahu has used his extensive influence, direct and indirect, in the US Congress to pressure the administration. He should now think twice before actively encouraging congressional opposition to the Geneva agreement, lest he generate a genuine, and in many ways unprecedented crisis in Israel's relations with a US administration.

Q. Can you factor into this analysis the election in recent days of Yitzhak "Boozhi" Herzog to head the Labor party?

A. Herzog replaces Shelly Yacimovich, who led Labor's mediocre election bid last January on a platform that emphasized socio-economic issues and ignored the Israeli-Palestinian issue. She was on record offering to support any new agreement Netanyahu reaches with the Palestinians, but only from outside the government; she refused to present Labor as a candidate to join Netanyahu's coalition.

Herzog, in contrast, prioritizes the peace process, and apparently would join the coalition if it was in danger of collapse because of right-wing opposition to an agreement with the Palestinians. This ostensibly presents Netanyahu with a more solid moderate option, whether on the Palestinian issue or on Iran--but only if he chooses to move toward moderation and encounters threats from the far right to abandon the coalition.

A. Abbas apparently thinks it is, and has let it be known that he is weighing the option carefully. One positive consideration (that Netanyahu apparently ignored) is that only heads of state can be invited to address the Knesset. By speaking there, Abbas would in effect be recognized by Israel as head of the very Palestinian state that Netanyahu refuses to acknowledge. On the other hand, it is almost certain that dozens of right wing members of Knesset would use the occasion to jeer Abbas and turn the event into an embarrassment for all.

Abbas could either emerge a hero, or with egg on his face. Yet if he turns down the invitation, Netanyahu could and probably will argue that he is insincere about peace.

Last Friday, Abbas told the Voice of Russia that he would address the Knesset "only in order to say what I want to say and not what [Netanyahu] wants to hear". This sounds like a copout, since Netanyahu is not known to have dictated what Abbas could or could not say to the Knesset.

As for Netanyahu traveling to Ramallah to speak at the Palestinian parliament, the latter is virtually defunct, with its reelection date long past. If it does convene to hear him, Netanyahu will find himself addressing not only Fateh but also Hamas MPs--unless they are in Israel's jails. And what about the security issues involved if Netanyahu, of all people, travels to the Palestinian parliament in Ramallah?

In short, this looks like a spur-of-the-moment Netanyahu gesture that he did not think through. Stay tuned for Abbas' decision--and what Netanyahu will do about it. 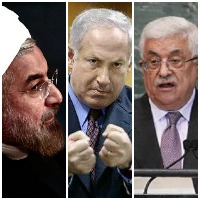