This week, Alpher discusses the seemingly significant high-level developments and statements regarding both the Israel-Arab peace process and Iran, against the backdrop of Israeli-American relations, how does the American security plan or "thoughts" challenge Netanyahu's security concept regarding the Jordan Valley, what is the significance of Obama's mention of a framework agreement as a negotiating outcome, what is the significance of Netanyahu's linkage of Iran and the two-state solution at the Saban Forum, and thoughts on Nelson Mandela's support for the Palestinians and consistent criticism of Israel.

Q. The past week witnessed a number of seemingly significant high-level developments and statements regarding both the Israel-Arab peace process and Iran, against the backdrop of Israeli-American relations. Can you sort them out?

A. First, here is a checklist of what transpired.

Beginning with the Palestinian issue, Secretary of State John Kerry and General John Allen presented in Jerusalem and Ramallah American "thoughts" regarding a security regime for the Jordan Valley as part of a two-state solution. Kerry allowed that the current peace talks could extend beyond the nine month period that expires in April. President Barack Obama suggested a "framework agreement" as a more realistic goal for the current talks than an end-of-conflict treaty. Former Shin Bet head Yuval Diskin sharply criticized the Netanyahu government's handling of the peace process and stated that a two-state solution was more important to Israel's security than an Iran nuclear deal. And senior coalition partner Yair Lapid (Yesh Atid) stated, after being briefed by Kerry, that progress toward a peace agreement would require changes in the coalition (meaning, presumably, that Labor would replace the more right-wing coalition members).

Turning to Iran, Obama and PM Binyamin Netanyahu both concentrated on the nuclear issue in their addresses to the Saban Forum in Washington. They appeared broadly to agree on the elements of Iran's nuclear program that need to be dismantled in accordance with a permanent agreement based on the recent Geneva deal. Obama suggested the chances of success were about 50-50. But Netanyahu argued that without disarming Iran it would be impossible to reach a two-state solution and that, indeed, Israel's existing peace agreements with Egypt and Jordan would be jeopardized.

Q. Let's start with the American security plan or "thoughts". How does the plan challenge Netanyahu's security concept regarding the Jordan Valley?

A. This was the first instance in the current peace process whereby the US intervened with ideas of its own, thereby seemingly signaling that Washington is becoming impatient. According to media reports, Kerry and Allen presented a plan whereby Israeli forces remain along the Jordan River and man border crossings together with Palestinians for a transitional period, with the US supplying sophisticated surveillance activities and equipment. The plan challenges the Palestinian demand that not a single IDF soldier remain on Palestinian territory, and challenges Netanyahu's demand for an Israeli presence in the entire Jordan Valley for an indefinite period of time. The Palestinians appear to have rejected the plan outright.

The real challenge here for Netanyahu concerns his insistence that territory equals security. Many Israeli security experts, most recently from the Council for Peace and Security, have argued that in an age when Israel is not threatened militarily by Arab land armies but is threatened by long-distance missiles and rockets that ignore terrain, the Jordan Valley is less important than Netanyahu makes it out to be. Indeed, it has always been tempting to believe that Netanyahu, like so many on the Israeli ideological right, simply covets the territory of the West Bank and uses security as a flimsy rationale. He presumably realizes that an extended Israeli presence in the broad Jordan Valley renders a Palestinian state non-viable and apparently hopes thereby to continue getting away with blaming the Palestinians exclusively for intransigence. Netanyahu's approach to the Jordan Valley has also constituted a kind of backhanded insult to Jordan, which has for years maintained near 100 percent security on its side of the border, thereby to a large extent obviating Israel's alleged concerns about terrorist infiltration.

Kerry opted for the US to present a security plan for the Jordan Valley before any other aspect of a two-state solution in order, ostensibly, to call Netanyahu's bluff. You are holding up serious negotiations because you insist that security arrangements be agreed prior to borders? Here is a plan that gives you security without territory. Now talk about borders.

Thus far Netanyahu has astutely allowed the Palestinians to object to the plan while he "studies" it. According to one report, the Palestinian rejection has prompted Kerry to announce a punitive delay in the third prisoner release scheduled for the end of this month. But even Israeli security experts not affiliated with Netanyahu will undoubtedly wish to modify the plan, too, particularly insofar as it relies on American rather than Israeli surveillance. That's why the Americans sensibly termed the plan "thoughts". Whether this attempt to deal with the security issues will now succeed in getting the Israeli-Palestinian talks moving remains to be seen.

Q. And Obama's mention of a framework agreement as a negotiating outcome: what is its significance?

A. Obama and Kerry, but also Netanyahu and PLO leader Mahmoud Abbas, all stated at the outset of the current negotiations in July that the objective was to reach a two-state, end-of-conflict agreement in nine months. It seemed obvious to many observers that, even in the best of circumstances, this was impossible to accomplish in the time allotted. Put bluntly, Kerry and Obama seemed naive, while Netanyahu and Abbas cynically played along to keep Washington happy.

But perhaps they weren't quite so naive. Having maneuvered the Israelis and Palestinians into negotiations, Kerry has begun to talk of extending the nine-month timeline, while Obama has allowed that a more general framework agreement that gives the parties incentives to continue negotiating beyond April might be more realistic. Conceivably, this is an indication that limited but significant progress is deemed possible. Yet this new flexibility regarding a deadline appears also to serve Netanyahu's objective of negotiating open-endedly while continuing both to build settlements and to maintain his disparate coalition with its pro-peace and pro-settler components.

The new flexibility might also be said to serve a presumed Obama administration objective of maintaining the peace process as a going concern at least through the November 2014 midterm elections. But it does not serve Abbas politically: he has pledged to renew Palestinian appeals and applications to join international institutions as a recognized state if and when the nine months expire without an agreement.

Q. Speaking to the Saban Forum, Netanyahu firmly linked Iran and the two-state solution. Where does this leave us?

A. We predicted recently in these virtual pages that Netanyahu would balk at concessions to the Palestinians because of his displeasure with the Geneva deal between the P5 + 1 and Iran. Now, by stating that if Iran even retains a military nuclear potential peace between Israel and the Arabs will be endangered if not impossible, he appears to have gone a step further. His statement also feeds Palestinian accusations that the US has acceded to an ongoing Israeli security presence along the Jordan River precisely in order to compensate Netanyahu for the drawbacks of the Geneva deal.

What is striking about Netanyahu's new linkage is that when talking about what has to be removed from the Iranian nuclear program in a final deal, he and Obama seemed to be in fairly close agreement. In general, Netanyahu has dropped his threatening "disaster" tone in talking about Geneva. He also, to his credit, called at the Saban Forum for the US to address not only Iran's nuclear capabilities but its genocidal rhetoric toward Israel--a serious lacuna in the recent Geneva deal.

All in all, we may sum up the current status of US-Israel-Iran-Palestine interaction by noting that, despite Kerry's buoyancy, there appears to be more room for optimism that Jerusalem and Washington will cooperate regarding the next phase with Iran than regarding the Palestinian issue. This, despite Diskin's pointed warning--ridiculed by Netanyahu--that the Palestinian issue is actually more important to Israel's security than Iran.

Q. Finally, with the death of Nelson Mandela, any thoughts on his support for the Palestinians and consistent criticism of Israel?

A. With so much of the world currently condemning Israel's approach to the Palestinian issue, there would seem to be nothing remarkable about Mandela's criticism. Except, of course, for the fact that it goes back more than 20 years, to the height of the Oslo period when most of the world was optimistic about Israeli-Palestinian peace. This is apparently because Mandela's attitude had two very specific, hence historically notable, roots.

First, until the end of apartheid in South Africa, Israel was involved in close security coordination with the Pretoria regime that oppressed the country's black majority. This was rationalized at the time with reference to vital Israeli security needs concerning strategic weaponry that the apartheid regime helped finance and supply, as well as concern for the welfare of South African Jewry. Of course, with the passage of time that rationale looks increasingly thin and hard to justify, but at the time it seemed to make sense in realpolitik terms to the Israeli security and political community.

Second, Mandela's ideological roots in the African National Congress linked him to a kind of "international" of national liberation movements in Africa and elsewhere in the 1960s and 70s that enjoyed solid Soviet support and in which the Palestine Liberation Movement was a member in good standing. It is impossible to exaggerate the formative influence this brotherhood had on its member leaders, whether from South Africa, Zimbabwe, Algeria or Palestine.

Israelis today celebrate Mandela's life and legacy along with the rest of the world. But it appears that Israel is sending President Shimon Peres to the Mandela funeral rather than Netanyahu not only because, for unexplained reasons, the costs of transporting and protecting Bibi and Sara are far higher, but also because Peres (despite his involvement decades ago in Israeli-South African security ties) is considered more acceptable to the South African leadership than Netanyahu. 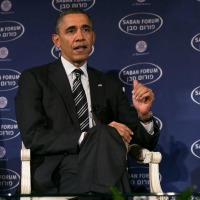