Americans for Peace Now's President and CEO Debra DeLee and our Chairman of the Board Jim Klutznick represented APN last night at a meeting for Jewish community leaders with Palestinian President Mahmoud Abbas in New York.

Abbas spoke about his commitment to a negotiated peace with Israel, and called on the attending Jewish community leaders to help promote peace between Israel and a future Palestine - two states living side by side in peace and security.

Here are several quotes from Abbas' talk, which was on the record, as published in the official Palestinian news agency, WAFA.


APN's Chairman of the Board James Klutznick said Abbas' comments were positive and reassuring. 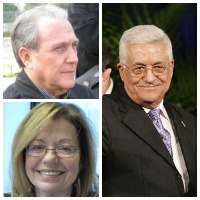 Yuval Diskin Speech to Geneva Initiative 10 Year Conference - Leading the Way to Peace
APN: Ceasefire is a start; now time to make peace
Rawabi: A clear Israeli and Zionist interest
We're the Antidote to the Extremists
Hard Truths About Hatred and Incitement
Matching Donation Grant Still Active - "This Is Not A Moment, It's The Movement" - Letter from new APN President and CEO
My tenure as CEO is ending...