Media coverage (news and analysis) on Decision at 50 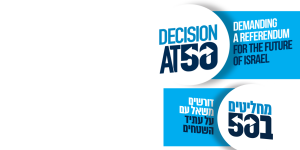 Recommended Readings on the new initiative from Peace Now and its allies, Decision at 50