At the roundtable with the Palestinian journalists in Washington, I was further shocked when most of them said I was the first Israeli with whom they had ever had a face-to-face conversation (not including soldiers at roadblocks).

Most of all, I was shocked to hear that they had no interest in meeting Israeli media professionals, even if such a meeting were to be organized by a neutral third party. What's the use, they said, we won't find common ground with Israeli journalists, nor do we have any chance of influencing Israeli public opinion through them.

I guess I shouldn't have been shocked.

Tragically, the rules of engagement between Israelis and Palestinians have changed. We know that the political stalemate does not freeze or preserve the situation on the ground. West Bank settlements continue to grow, making a two-state solution increasingly complicated. But we tend to forget that the festering status quo also has a devastating impact on people's hearts and minds.

For a generation of Palestinians that has known nothing but occupation, separation and dehumanization, the political stalemate and the lack of a political horizon spawn a sense of hopelessness.

For this generation, there is little point in trying to reach out to the other side, because the other side seems utterly uninterested in changing the status quo. We Israelis often complain that "there is no one to talk to" on the other side. Well, many young Palestinians have long ago given up on finding a partner on our side. For many of them, Israelis are a lost cause.

For Palestinians, the occupation is a given, and so is resisting the occupation. It's the only reality they know. It's a way of life. They live with the banality of the anomaly and with the obvious imperative of resisting it.

One of the ways in which Palestinian society addresses this dissonance is through vehemently opposing what is referred to as normalization, typically defined as any activity that brings together Israelis and Palestinians - unless they collaborate to jointly resist the occupation.

The irony is that the anti-normalization campaign can easily become self-defeating. Engagement with Israelis is a necessary ingredient in the effort to end the occupation. That was the case in the 1980s and '90s, and that is still the case today.

I agree with the assertion that if leaders lead, the public will follow. If Israeli and Palestinian leaders reach a peace deal, the public on both sides will sign on. But as U.S. President Barack Obama told a crowd of young Israelis in Jerusalem in March, "Political leaders will not take risks if the people do not demand that they do."

Obama was right. We must demand. Palestinians, Israelis and those across the ocean who care about Middle East peace - we must demand that our leaders take advantage of the current opportunity for Israeli-Palestinian peace. The leaders should act, but we have a heavy responsibility not to let them - or ourselves - be resigned to the anomaly of the status quo.

This article appeared first on December 9, 2013 at Haaretz 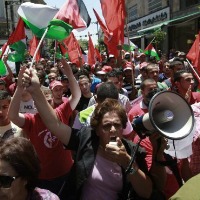 APN's Ori Nir at Haaretz: Palestinian resistance shouldn't mean shutting out Israelis
APN's Ori Nir in the Forward: "Peace with the UAE is fabulous. But Israel’s existential problem is at home"
APN's Ori Nir in Haaretz: The sickness in both Israeli and Palestinian societies
Stop Ignoring How Routine the Occupation Has Become
Clarity
APN Statement Marking 50 Years of Israeli Occupation