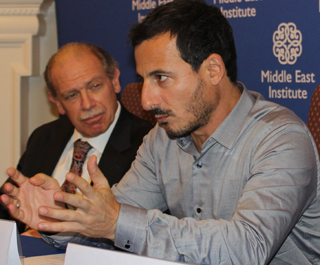 Feedback was excellent. After every meeting, Avi’s interlocutors told him that their conversation with him left them more encouraged and hopeful about Israel than they have been in a very long time.

Avi spoke mainly about his achievements in the nine months since he became Peace Now’s director, and about the organization’s plans going forward.

In addition to recruiting some 5,000 new activists in the past months, Shalom Achshav has activated branches in every important university campus across Israel. Crisscrossing Israel, Avi has had dozens of meetings with groups in community centers, campuses, and living rooms, with an emphasis on the periphery.

Avi reported that Peace Now is currently working on three major projects. One is a series of four courses for young opinion leaders, including Knesset staff, who during three and a half months will study the ins and outs of the Israeli-Palestinian conflict. They will learn how to talk about the conflict, and how to effectively advocate for Israeli-Palestinian peace. Another project is the development of tools to use Facebook’s “live” function as an accessible, affordable platform for the pro-peace community to communicate inside Israel and beyond.

The third project that Avi mentioned was his plans for a series of public events across Israel around the June 50-year “anniversary” of the occupation, which will culminate in a mass demonstration in Tel Aviv on Saturday night, June 3rd.

Shalom Achshav: Making a Difference!
Fatigue? Fuggetabout it. Letty Cottin Pogrebin is inspired!
Resist the policies of Netanyahu and Trump
Decision at 50 Press Release: A New Movement Demanding a Referendum on the Fate of Israeli Control over the Palestinian Territories and on the Future of Israel
Bidding Farewell to Avi Buskila
Our rally was a success-- please help us pay for it
NEW ITEM - Goal: Lower the expectations of the Palestinians - The Friedman File: APN Watch on soon-to-be-ex-US Ambassador to Israel