Oppose Moving the Embassy to Jerusalem 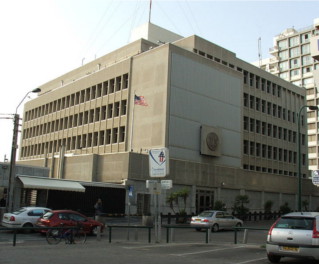 Every successive U.S. president -- Republican and Democrat -- has used this waiver, recognizing that moving the embassy outside the context of a peace agreement would be provocative and would undermine U.S. credibility, threaten U.S. peace efforts, and harm U.S. interests.

Efforts to force the president to move the embassy, despite all of this, are misguided and counterproductive.

Lara Friedman in the Huffington Post on the far-reaching consequences for all Americans of rash actions by the Trump Administration 1/6/17: Think Trump’s Policies On Israel-Palestine Have Nothing To Do With You? Think Again

APN on Jerusalem, the embassy, and more: They Say, We Say

Danny Seidemann 1/6/17: Moving the U.S. Embassy in Israel to Jerusalem: A Hard Look at the Arguments & Implications

Khaled Elgindy, Brookings 1/30/17: Why moving the U.S. embassy to Jerusalem would be dangerous and unwise

Steven Cook, CFR, in Salon.com 1/29/17: Moving the U.S. embassy to Jerusalem is a bad idea for everyone — except Israeli hard-liners and their American friends

Times of Israel Jordan 1/6/17: Moving US Embassy to Jerusalem is a ‘red line’

Haaretz 1/9/17: Why the Latest Palestinian Attacker in Jerusalem Was Not Deterred

Hussein Ibish in Foreign Policy 12/22/16: Want a Third Intifada? Go Ahead and Move the U.S. Embassy to Jerusalem