How many Israelis actually live in the Jordan Valley today? Hundreds of thousands? Tens of thousands? Actually, not so many. According to the Israeli Central Bureau of Statistics, 6,042 Israelis live in the Jordan Valley (CBS 2012). That is about the same as filling half of a grandstand at Teddy Stadium. In the last 20 years there has been minimal growth in the number of settlers in the Jordan Valley. The average growth is about 60 people a year. Settlements, of such minor scale, have no military significance for the future of Israel. All of the talk about the string of settlements in the Jordan Valley protecting Israel's eastern border is nothing more than right wing political propaganda, disconnected from reality, whose purpose is to undermine the prospects of reaching a two-state solution.

The Jordan Valley is nearly devoid of Israeli residents, rather there is a large Palestinian population. There are ten times more Palestinians, 65,000 in the Jordan valley. Over the years, by declaring state land, firing zones and nature reserves, Israel has managed to take over 77.5% of the land. Israeli farmers living in the area enjoy large tracts of land as well as, cheap and plentiful Palestinian labor. The Jordan Valley has become an agricultural real estate asset that bears fruit for a handful of settlers, who exploit the land and water resources, which are essential resources for the local Palestinians.

Despite the economic benefits, most of the Jordan Valley settlers are not proponents of the national-religious ideology and would agree to evacuate as part of a peace agreement. Some of the settlements have already been abandoned by the founding generation and were replaced by "reinforcement" groups from religious Zionism who are changing the character of settlements in the Jordan Valley; replacing supporters of the labor movement with followers of Gush Emunim.

Militarily, the Jordan Valley was once considered a strategic military asset for Israel. That concept was developed around the end of the Six-Day War, known as the 'Alon Plan'. This plan was created in a context in which, Israel faced a serious existential threat from the east in the form of thousands of Iraqi soldiers and tanks who could have made their way towards the center of Israel. Forty-five years later the map of threats has changed. The threat of an invasion by armored forces from the east no longer exists, technological advances have diminished the enemy's ability to surprise and, if necessary, the IDF can reach any place in the Jordan Valley within half an hour. The area is already empty of Israeli settlers, and is already empty of infantry and armored regiments. Most of the soldiers stationed in the Jordan Valley are engaged in routine security missions along the border fence, mainly protecting the settlers and inspecting the Palestinian laborers at the checkpoints. If a political decision is made to separate into two states, the same level of security can be maintained by strict security arrangements on the border, electronic observation and the presence of international forces at the border crossings. Surely this would not require annexing the whole Jordan Valley and leaving the settlements in place.

It is not the security of Israel that interests Miri Regev, Gideon Sa'ar and their friends, it is the security of all the settlements that they are after. The right-wing knows very well that there will be no peace agreement without evacuating the Jordan Valley. The right-wing's use of the Jordan valley as a political card, is a cunning, even demagoguing attempt to undermine an agreement.

They too know that the Jordan Valley is almost empty and its military value in the present reality is not significant. They too know that the number of settlers in the area is small and most will agree to evacuate in exchange for an agreement. So why confuse the public with facts and figures when you can hide behind clichés about security and settlements? The Jordan Valley, which really was a security need in the past, is slowly turning into the political security zone for the settlers of Yitzhar and Itamar, who are using it to guarantee their places on the hilltops of Judea and Samaria.

This article was first published in Haaretz (Hebrew) January 1, 2014 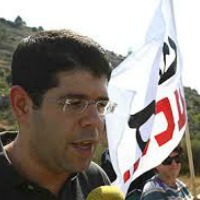