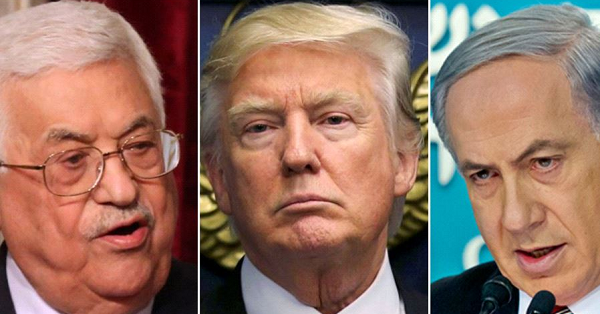 By refusing to publicly endorse a two-state solution to the Israeli-Palestinian conflict and suggesting that doing so would "bias one side over the other" regarding possible outcomes, the Trump Administration yesterday dropped a dangerous and unacceptable bombshell. The Administration turned its back on a core bipartisan foreign policy principle, thumbed its nose at an international consensus regarding the way to resolve the conflict, and handed a gift to extremists on both sides of the Israeli-Palestinian divide.

APN's President and CEO Debra DeLee said: "We've come to expect flippant ad libs from President Trump, turning established policy on its head, seemingly at his whim. This is different. What we heard from Spokeswoman Nauert must be taken as an official US position, vetted through State Department channels. Appallingly, Trump's whims have now been codified as America's foreign policy."

"It is for good reason that the two-state solution has become a matter of consensus in the region and internationally. There may be many scenarios and visions for the future of Israeli-Palestinian relations, but there is only one conflict-ending solution. It is based on a territorial compromise, establishing an independent Palestinian state in the West Bank and Gaza Strip and its capital in East Jerusalem, with Palestinians living side by side in peace and security with Israel. Any other scenario is a recipe for perpetual conflict."

"Consecutive US administrations since 2002, Republican and Democratic, have articulated a vision and helped construct an internationally endorsed format for a two-state outcome to Israeli-Palestinian bilateral negotiations. The parties, under their own successive leaderships, have committed to this vision, and have negotiated to realize it. Even Prime Minister Netanyahu, head of the most hardline government in Israel's history, has explicitly endorsed it. For the Trump Administration to eschew it is disastrous."

"Without a concrete vision for peace, negotiations are fruitless punctuations to perennial violence. Extremists on both sides have been trying to discredit the two-state vision since it was internationally adopted. Now they have a partner in the White House. The State Department spokesperson disingenuously claims that the Trump Administration is trying to avoid 'bias.' In fact, it has biased American policy against the national interests of Israelis, Palestinians, and America's international allies, not to mention those of the United States itself."