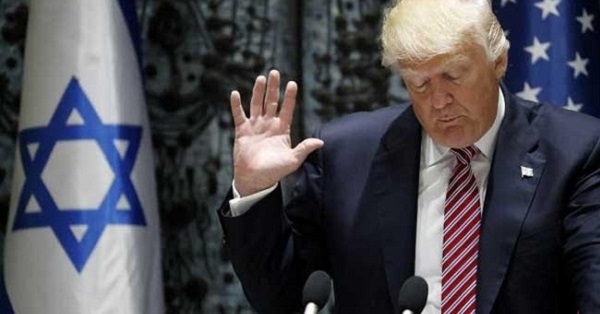 The Trump administration has never endorsed this vision, and is now actively working to bring about its demise.

Alarmed by this trajectory, Americans for Peace Now (APN) calls on the few remaining responsible members of the Trump administration's foreign policy team and on Congress to act to reverse this disastrous trend and preserve any remaining chance for viable peace between Israel and its Palestinian neighbors.

The latest swing of the Trump administration's wrecking ball at Palestinians and at prospects for peace was its decision earlier this week to shutter the PLO mission in Washington, DC, an institution that has practically been serving as a Palestinian embassy in the US capital for the past quarter-century. This measure followed decisions to defund humanitarian and development projects in the West Bank and Palestinian hospitals in East Jerusalem, and to end America's funding of UNRWA, the United Nations agency that provides health, education, and other vital services to Palestinian refugees.

The Trump administration defends its latest move on the grounds that it will put pressure on the Palestinian leadership to engage with its unannounced "ultimate deal" for Israeli-Palestinian peace. By all indications, the Trump plan does not endorse a two-state solution and predetermines key negotiating issues such as the future of Jerusalem and the future of Palestinian refugees by (in the words of Trump and his team) taking them "off the table."

Mahmoud Abbas has repeatedly committed to a negotiated two-state peace deal that would fulfill Israeli national security demands. Only last week, in a meeting with representatives of the Israeli peace movement Peace Now (Shalom Achshav), APN's sister-organization, Abbas committed to a demilitarized Palestinian state, the borders of which would be negotiated with Israel, and which would absorb Palestinian refugees so as not to flood Israel with Palestinians who would threaten Israel's demographic Jewish majority.

Donald Trump and his chief advisors on Israeli-Palestinian relations – his former real estate lawyer, his former bankruptcy lawyer, and his son-in-law – have shown no genuine interest in advancing peace between Israel and the Palestinians. Had that been their sincere objective, they would have taken measures to encourage Chairman Mahmoud Abbas and the PLO to engage. Instead, they have taken step after step to humiliate, weaken, and punish Abbas and the PLO. Coercion will not convince Palestinians to engage when there is nothing left on the table to negotiate. The Trump administration's true objective appears to be portraying the Palestinians as rejectionists for their refusal to submit to American bullying. This will clear the way for the Trump administration to formally abandon America's traditional role as an honest broker of Israeli-Palestinian peace efforts.

Israel's future as a liberal democracy and a Jewish state depends on a viable political resolution of its conflict with the Palestinians. Americans who care about Israel must join us in pushing the administration and Congress to reverse Trump's disastrous policies on the Israeli-Palestinian conflict.