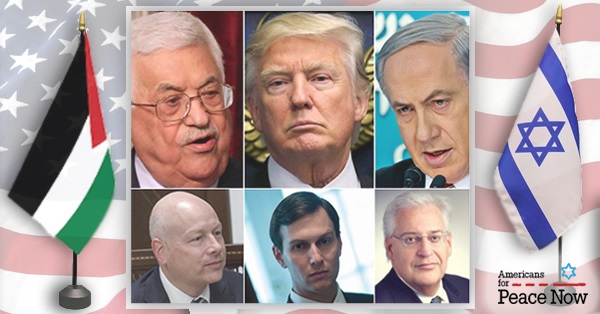 President Trump’s Middle East team is preparing to release its Israeli-Palestinian peace plan. Reports regarding the content of the plan are unsettling. While we believe the United States has a vital role to play in bringing together Israelis and Palestinians to make peace, we view the Trump administration’s effort with grave concern. This paper offers guidelines to assess the prospects for success of a Trump peace plan by examining: 1) the current political context, 2) the essential requirements for a plan, and 3) the measures that should be taken to pave the way for negotiations.

Actions and statements by administration officials regarding some of the most controversial components of the Israeli-Palestinian conflict (particularly Jerusalem, refugees, and borders) do not bode well for the prospects of a successful plan. We are deeply concerned that a release of the Trump peace plan will exacerbate the Israeli-Palestinian conflict rather than move it toward resolution, given current conditions. They include:

• Pushing Jerusalem “Off the Table”: While past administrations have not offered detailed, comprehensive roadmaps for a compromise on Jerusalem, the Trump administration has pushed this final-status issue into a dead-end. Trump recognized Israeli claims to Jerusalem without parallel recognition of Palestinians’ claims to East Jerusalem as the capital of their future state or concessions from Israeli Prime Minister Benjamin Netanyahu. Trump’s move to take Jerusalem “off the table,” as he put it, showed his intention to dictate the terms of an Israeli-Palestinian settlement on terms unacceptable to Palestinians.

• Loss of Contact with Palestinians: Given the resulting (and predictable) decision of President Abbas to end diplomatic contact with the US, the Trump administration is severely handicapped by its lack of engagement with Palestinian interlocutors. Any plan composed with the input of only one side to the conflict is bound to be hopelessly lopsided, with no possibility of persuading Palestinians to discuss the plan, much less to accept it. Lacking contact with or input from the PLO, the Trump administration – in collaboration with the Netanyahu government and possibly with some of the Arab states – may be preparing to pressure the Palestinian leadership into taking a deal that falls short of Palestinians’ minimum requirements and expectations. The Palestinian people will reject such a deal, dooming it to failure. If Palestinians remain steadfast and refuse, President Trump and his team will have set up the Palestinians to be blamed for rejecting an opportunity for peace.

• Punishing Palestinian Refugees: To rebuke the Palestinian Authority for cutting off contacts with Washington and pressure it to reinstate contacts, Trump announced dramatic cuts in US funding for the UN Relief and Works Agency (UNRWA), which provides assistance to some 5 million Palestinian refugees. Ultimately, this appears to be part of a strategy to deny the refugee status of Palestinians by killing the UN agency whose existence is predicated upon that status. This is another core issue of the Israeli-Palestinian conflict the Trump Administration is trying take “off the table” before negotiations begin.

• No Commitment to a Two-State Solution: Despite prodding from the Palestinian leadership and other key players to do so, the Trump administration has not committed to a two-state solution as the goal of its peace initiative. The two-state solution is regarded by pluralities (if not majorities) of Israelis and Palestinians, as well as by most credible experts including a consensus of current and former members of Israel’s security establishment, as the only conflict-ending resolution to the Israeli-Palestinian conflict. Any plan that does not provide for Palestinian sovereignty is doomed to fail.

• Exclusive Focus on Economic Conditions: The initiatives emphasized by the Trump peace team have focused on improving economic conditions for Palestinians while neglecting the political measures required for a conflict-ending Israeli-Palestinian agreement. Bettering the economic conditions of Palestinians is vital, and to that end the Trump administration should reverse its policies which target Palestinians financially, including cuts to UNRWA funding and withholding other monies allocated by Congress to the West Bank and Gaza. That said, economic and humanitarian measures benefiting the Palestinians cannot substitute for a political agreement between Israel and the Palestinians, which addresses Palestinian national aspirations for a sovereign state and the various “final status” issues that must be settled to achieve a two-state solution.

• One-Sided Peace Team: Trump’s peace team – composed of his son-in-law Jared Kushner, his chief Middle East envoy Jason Greenblatt, and US Ambassador to Israel David Friedman – has a history of close identification with the Israeli right (if not the extreme right) and of actively supporting Israeli settlements in the West Bank. Settlements are the most blatant physical manifestation of Israel’s West Bank occupation. The three, and Ambassador Friedman in particular, have failed to adopt a more even-handed posture since entering government service. In one of many examples in which Friedman has worked to overturn longstanding US policy, he reportedly asked State Department diplomats to stop referring to the West Bank as “occupied.” Subsequently, the State Department’s 2017 human rights report all but omitted references to the West Bank, East Jerusalem, Gaza, and the Golan Heights as occupied, as was the practice in previous versions of the report. In the eyes of many Palestinians, the Trump administration is therefore perceived as endorsing the occupation and embracing the status quo, the opposite of an honest broker.

Given the above, release of the Trump plan is more likely to inflame and perpetuate the Israeli-Palestinian conflict than facilitate an end to it.

Despite the prospect of delivering a peace plan that will be dead on arrival, the Trump team seems at present determined to move ahead. To better assess a Trump plan for Israeli-Palestinian peace once it is released, Americans for Peace Now (APN) offers some guidelines as to what such a plan should include.

APN does not presume to prescribe a detailed formula for resolving the Israeli-Palestinian conflict. We appreciate efforts by past US administrations to avoid prescribing or imposing a detailed peace plan. At the same time, we strongly believe that any US-authored peace plan, if it is to have a chance of succeeding, must assert a framework based on several unshakable principles. We believe that a Trump plan should be reviewed against the background of past diplomatic initiatives – the Clinton Parameters, the 2000 Camp David negotiations, the George W. Bush administration Road Map, the 2007 Annapolis understandings, the Arab Peace Initiative, the Oslo Accords, and successive UN Security Council resolutions – which generated international consensus and served to narrow gaps between Israeli and Palestinian negotiators, bringing them close to compromise agreements. These principles include:

• Forthright Definition of the Endgame: The goal must be an agreement that definitively ends all claims and results in two politically and economically viable sovereign states, Israel and Palestine, living side-by-side in peace within recognized borders, with security and contiguity, and with the character of each state determined by its citizens.

• West Bank and Gaza: A future Palestinian state should be one entity comprised of the West Bank and the Gaza Strip, with a physical connection between them.

• Security Assurances: A negotiated agreement must address both Israeli and Palestinian security requirements. The US should support a robust international role in guaranteeing mutually agreed upon security arrangements.

• 1967 Lines as Starting Point: The US should explicitly recognize the June 4, 1967 Green Line as the starting point for negotiations over territory.

• Equal Land Swaps: As the basis for an agreement regarding borders and settlements, the US should embrace the principle of equal (one-to-one) land swaps.

• Jerusalem, Home to Two Capitals: The peace plan should include an unambiguous declaration of the US vision for West Jerusalem and East Jerusalem, respectively, as the capitals of Israel and Palestine.

• Repair Relations with Palestinians: Having lost the trust of the Palestinian leadership and the Palestinian people, particularly over its actions regarding Jerusalem, the Trump Administration must extend itself to repair the relationship.

• Build Support in the International Community: Washington should undertake an international diplomatic initiative to rally the support of the international community for America’s brokership of Israeli-Palestinian peace negotiations. The Trump administration should welcome and encourage the engagement of additional important stakeholders, including the United Nations, the European Union, and the Arab League.

• Declare Peace a US Interest: Like previous administrations, the Trump administration should make clear that an Israeli-Palestinian peace accord is in the national security interest of the United States. While a peace agreement cannot and will not be forced upon the parties, the US will push for a fair and reasonable agreement, consistent with its national security interests, living up to the honest broker role that America must fulfill.