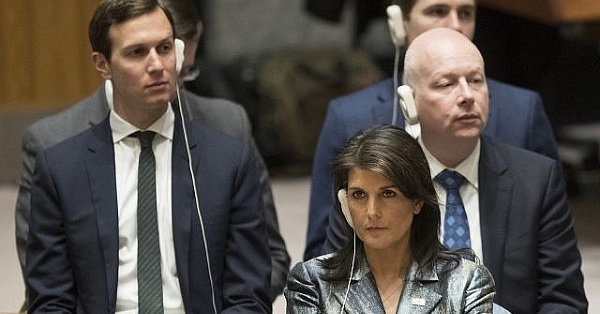 Americans for Peace Now (APN) strongly condemns efforts by the Trump administration to end the refugee status of millions of Palestinians prior to the achievement of a final status agreement between Israel and the Palestinian Liberation Organization (PLO).

A recent report in Foreign Policy reveals that the Trump administration – and Special Advisor to the President Jared Kushner in particular – have sought to end U.S. support for the United Nation Refugee Works Agency (UNRWA), which provides 5 million Palestinians in the West Bank, Gaza, Syria, Jordan, and Lebanon with education, health care, food, and other services. Kushner is quoted as writing in an email to White House colleagues: “It is important to have an honest and sincere effort to disrupt UNRWA.” Furthermore, the report reveals that Kushner and US Ambassador to the UN Nikki Haley advocated ending all funding for UNRWA in January of this year. The report also cites an unsuccessful attempt by Kushner to push Jordan into stripping the country’s Palestinian refugees of their status.

These efforts must be seen for what they are: an attempt to pre-determine the outcome of one of the core issues of the Israeli-Palestinian conflict. As with President Trump’s disastrous decision to move the US embassy to Jerusalem earlier this year, the administration’s approach to UNRWA and the issues of Palestinian refugees reveals a reckless disregard for Palestinian interests and concerns, a shallow understanding of the issues central to the Israeli-Palestinian conflict, and a deep-seated bias toward a right-wing Israeli narrative. In fact, some of the staunchest support expressed for UNRWA has come from Israeli military and security officials, who recognize the agency’s vital role in sustaining millions of Palestinians on a daily basis and preventing explosions of unrest and violence.

Any solution to the Palestinian refugee issue must respect both the sensitivities of the Palestinian refugees and Israel's sovereign right to determine who may live within its borders. Efforts to use technical or bureaucratic means to bypass a negotiated solution, as part of a comprehensive Israeli-Palestinian peace agreement, are doomed to fail, could exacerbate the conflict, and could ultimately make resolution of the issue more difficult.