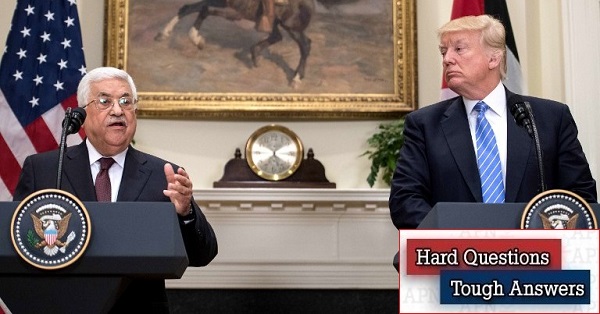 Q. President Trump has now shut down all US government financial aid to Palestinians and to UNRWA and is closing the PLO diplomatic office in Washington. What is he trying to achieve? Can he succeed?

A. The administration appears to believe that financial and diplomatic pressure will force the PLO and the Ramallah-based Palestinian Authority to acquiesce in its concept for reaching the “ultimate deal”. The Palestinians must accept American steps like recognition of Israel’s capital in Jerusalem, bow to pressure to radically reorganize Palestinian refugee status, and reopen channels of dialogue with Trump’s representatives.

The Palestinians must also cease antagonizing the administration with initiatives like appeals to the International Court of Justice and the International Criminal Court in The Hague. The cases being brought by Palestinian leader Mahmoud Abbas concern US recognition of Israel’s capital in Jerusalem and Israel’s planned razing of a Palestinian Bedouin village, Khan al-Ahmar, in the West Bank. The State Department described these moves as the immediate reason for closing the PLO embassy in Washington.

But no such rationale was provided by the administration for cancelling $20 million in funding for six Palestinian hospitals in East Jerusalem and $10 million in US Agency for International Development support for Israeli-Palestinian civil society projects like a joint youth football league. These steps directly punish Israeli and Palestinian civilians who are not involved in the politics of the conflict. All told, recent US aid cuts for Palestinians exceed $500 million annually.

The only immediate rationale for these steps was provided by Jared Kushner, White House adviser on the Middle East. Speaking on the twenty-fifth anniversary of the signing of the Oslo Accords, Kushner stated last week that US aid should be used to further US national interests. “Nobody is entitled to America’s foreign aid”, he told the New York Times. Aid to the Palestinians had evolved into a decades-long entitlement program with no plan to make them self-reliant.

Kushner might have come clean and used the term “intimidation”.

(Full disclosure: more than a decade ago, the bitterlemons dialogue project that I ran together with a Palestinian partner was a recipient of USAID funds under the program just closed down by Trump.)

Q. Are the Palestinians intimidated?

A. So far they are defiant. And they are busy trying to fill the funding gap, particularly for UNRWA, the UN agency charged with supporting Palestinian refugees. A number of European and Arab countries have pledged additional aid. Nor have we seen any indication of Palestinian readiness to renew talks with US negotiators or redefine the controversial status of refugee descendants who are classified by the UN as refugees. (Still, US-PA-Israel security coordination in the West Bank continues; no one seems ready to cease this vital aspect of US involvement.)

A reliable Palestinian PSR poll from early September shows that 60 percent of Palestinians oppose resumption of contacts with the administration. A majority expects the US to fail in shutting down UNRWA. And 90 percent view the Trump administration as biased in favor of Israel.

The PSR poll also tells us that most Palestinians continue to oppose Abbas and most of his policies regarding the conflict, Hamas, etc. Yet it seems clear that little if anything will change in the Palestinian response to Trump’s financial measures as long as the aging, lame-duck Abbas remains in charge.

Beyond that observation, economic sticks and carrots have never been significant factors in Palestinian decision-making on the conflict and the peace process. The Israeli-Palestinian conflict has never been an economic one. Right now, Trump’s financial punishment of the Palestinians appears to be little more than a cover for the administration’s predictable failure to come up with the “ultimate deal”.

A. Certainly on the part of the Netanyahu government and its supporters, who described those measures as a (Rosh HaShana) holiday gift from Trump. From the standpoint of Israel’s ultra-nationalist mainstream, any measure that hurts the Palestinians and sharpens their feud with Trump is good news.

But as Yediot Aharonot columnist Nachum Barnea noted last week, “a less emotional analysis would point to a few problems. . . . First, the government of Israel considers [the US-Palestinian feud] to be the objective, whereas Trump sees it as a means to an end. It could be reversed, as with North Korea. Second, Trump is far away and we are near. The children who won’t go to an UNRWA school [in the Gaza Strip, due to US defunding of UNRWA] will throw Molotov cocktails at IDF troops on the Gaza periphery. And the main point is that no one knows where despair will now lead the Palestinians. . . and whether Trump, in his disputes with allies and rivals alike, is not rendering the US irrelevant to global politics.”

Then too, Kushner’s “No one is entitled to America’s foreign aid” could end up being applied to Israel as well.

Q. But Kushner is not involved in Syria. Why is the US protesting so adamantly against an imminent Syrian-Russian-Iranian offensive against Islamists in the northwest Syrian enclave of Idlib? How does this affect Israel’s interests?

A. Idlib is where the victorious Syrian-Russian-Iranian coalition in Syria has for several years now been allowing defeated Islamists and Syrians uprooted by war to take refuge. An al-Qaeda linked Islamist group reportedly has 10,000 fighters there, controlling 60 percent of the territory. Predictably, the pro-Assad forces are reneging on previous assurances to refugees of safety in exile and are deploying to conquer Idlib. The Islamists there have nowhere to flee to and are accordingly prepared for a defiant last stand.

By the same token, now that the Islamists are isolated, the pro-Assad coalition that wants to destroy them appears indifferent to the cost in human lives. Russia has massed a naval fleet off the Syrian Idlib coast. There are strong indications that the Assad regime plans again to use chemical weapons in the anticipated battle for Idlib. We recall that previous Russian-Syrian-Iranian “liberation” campaigns on Syrian soil involved wholesale and indiscriminate bombing of hospitals.

Turkey, which borders on Idlib from the north and occupies parcels of adjacent Syrian territory, fears the Idlib campaign will generate another wave of Syrian refugees nearly a million-strong seeking to enter its territory. Because the refugees will seek to proceed to Europe, which does not want them, the European Union has entered the picture and is pressuring, along with Turkey, for a non-violent solution in Idlib even as Germany intimates it may take the extraordinary step of joining US-initiated punitive airstrikes in the event Syria renews chemical attacks. The United Nations is warning that Idlib could be the worst humanitarian catastrophe of the twenty-first century.

The pressure building in Idlib has generated a flurry of diplomatic activity. At the time of writing, Russia had suspended air attacks on Idlib that were seen as a prelude to an invasion by Syrian, Lebanese Hezbollah and Iranian proxy forces. Moscow, Tehran and Ankara, who in recent months have upgraded their consultations and cooperation regarding Syria, are meeting to discuss alternatives. Turkey, fearing the consequences of violence in Idlib, has surprisingly reached out recently to Israel to restore better relations. After all, the two flank from the north and south a re-emergent dictatorial and vengeful Syria that is liable to cause both of them problems. Turkey is also again arming anti-Assad rebels, a move favored by the US.

Enter the Trump administration. Not only has it threatened to attack Syria if Assad uses chemical weapons in Idlib, but it has to consider the danger that this could involve the US (and now possibly Germany too) in military friction with Russia. Washington has also reversed itself and announced that a small US troop contingent will remain on Syrian soil for the time being to deal with the Islamic State and to press for Iran’s departure. President Trump has tweeted warnings against a “reckless” Syrian attack on Idlib.

True, the US has finally put together a credible team of diplomats to deal with Syria. Yet nowhere can we detect a coherent US strategy regarding Syria and the Iranian and Russian military presence there; just tweets. This is what has to concern Israel. If events in Syria generate an upgrade in Turkish-Israeli relations, that is all to the good. But any sort of US-Russian friction on Syrian soil or in Syrian airspace is too close for comfort for PM Netanyahu, who thus far has maneuvered adroitly between the two with regard to Syria.

Incidentally the Russians, who unlike the US do have a cohesive Syria strategy, are having difficulty understanding why Trump is concerned about the fate of a small al-Qaeda army in Idlib. By Moscow’s calculation, the US should be happy to see Russia destroy remaining Qaeda forces in the Levant. But then again, the Russians in Syria, like Assad’s forces and the Iranians whom they support, have never shown great concern for civilian casualties. And you can’t destroy embedded Islamists, in Idlib or elsewhere, without killing, wounding and displacing a lot of civilians.

Q. Is Israel being dragged into US-Chinese tensions too? Last week Haaretz quoted senior retired American officers and security officials threatening that if a Chinese company manages the port of Haifa, the US Sixth Fleet will not visit there anymore.

A. As in many places throughout the world, the PRC is investing extensively in Israeli infrastructure. Chinese companies are building, and will manage, port extensions in Haifa and Ashdod. They are building key road tunnels. They are building Tel Aviv’s light rail/metro network. Chinese institutes of technological education are investing hundreds of millions of dollars in Israeli universities engaged in high-tech research.

Most if not all of these projects are part of the Chinese “one belt, one road” grand strategy for gobbling up foreign technologies and facilitating Chinese raw material imports and finished-goods exports globally. By the by, they promise to reward China with growing influence over global economic and strategic sectors.

The US warning may be little more than the grumbling of a retired US Navy admiral whom no one back home listens to. But a growing number of Israelis, too, who deal with strategic issues, are asking whether and how Israel’s most vital strategic interests are being taken into account by the Netanyahu government when the Chinese come around with bursting wallets. Could, for example, the free movement of the Israel Navy with its growing strategic deterrent role be affected in the future by Chinese control over parts of Haifa port?

The Trump administration is increasingly at odds with the PRC. In stark contrast Israel and China, like Israel and Russia, maintain fruitful strategic and economic relations--even in Syria. But the problem is not just what Washington thinks or says about this. A growing number of countries, including Greenland, Pakistan, Nepal, Malaysia, Djibouti and Sri Lanka, have in recent months raised objections to Chinese strategic investments or tried to cancel them.

This issue should be dealt with by Israel now, preferably in close consultation with the Pentagon.