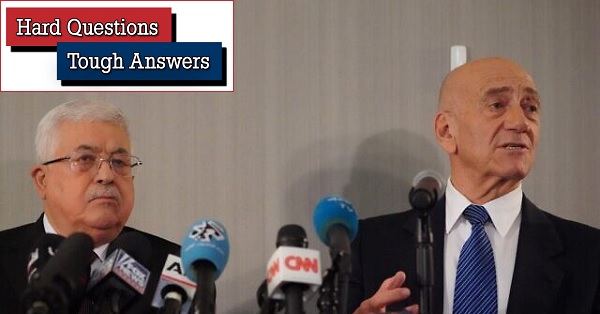 Q. Israel is in the midst of its third Knesset election campaign in a year. Obviously, politics and hypocrisy go together, especially at election time when empty promises are fast and free. But hypocrisy and security?

A. Yes, and not just in and around Israel. Everywhere we look throughout the region, hypocrisy seems to reign with regard to security issues that are likely to be at least as existential as election results.

To be clear, this is not about bad strategies derived from ignorance or prejudice. The architects of the Trump ‘deal of the century’, for example, appear to honestly believe that Israel has exclusive rights to the entire Land of Israel, that a Palestinian Bantustan qualifies as a state and that economic prosperity obviates the need for sovereignty and dignity. They say all this up front. They are not hypocrites.

Q. Still, start close to home. Where is the hypocrisy in recent developments regarding Israel-Palestine?

A. Listen to Palestinian leader Mahmoud Abbas (Abu Mazen) speaking at the United Nations last week, with former Israeli prime minister Ehud Olmert at his side: “Negotiations with Olmert in their day were promising. We didn’t reach a solution but we were close.” This is hypocrisy. Back in 2009, Abbas told al-Jazeera and The Washington Post’s Jackson Diehl that “I turned him down. The gaps were wide.” He listened to Olmert’s peace proposals in September 2008, walked out and never returned.

Olmert too has, since his release from a jail term on corruption charges, intimated repeatedly that he and Abbas were close to an agreement. It’s easy to understand the desire of Olmert and Abbas to recast their failed negotiations in rosy terms. They both need to burnish their legacies. But this deception is dangerous. It obfuscates negotiating issues that clearly divided the parties in 2008 and regarding which they remain far apart today, such as the Jerusalem holy places and the Palestinian refugee “right of return”.

Abbas was accurate in his 2009 comment. The gaps were wide. That is why the most far-reaching Israeli offer on record, Olmert’s, failed. To paint a different picture today is hypocrisy.

A. We can start with Abbas’s recent announcement, for the nth time, that he was cancelling Palestinian-Israeli security cooperation. For the nth time, he didn’t mean it.

Turning to Israel, last week Defense Minister Naftali Bennet was asked by the Shabak, the General Security Service, to sign off on an administrative detention order for a young extreme right-religious activist engaged in criminal terrorist acts. The Shabak explained to Bennet that detention without trial was necessary because it could not reveal in court its sources regarding the young man’s activities. Meanwhile, he was a danger to security. Bennet, like all his predecessors, signed. He recognized the need to respect Shabak warnings regarding right-wing terrorism in East Jerusalem and the West Bank.

Then the pressures began. After all, it’s election time. And while the voting public is alarmingly indifferent and uninvolved after two failed elections, the politicians are not. Nor are the rabbis. Bennet suddenly faced pressures and threats that could affect his chances to garner votes from the messianic religious right on March 2. After two days, he cancelled his signature. “I won’t be a rubber stamp for you or the Shabak,” he told an interviewer.

That is hypocrisy. All the right-wing extremists in the West Bank and their rabbis took note. Bennet’s reversal has nothing to do with human rights and everything to do with politics. He is knowingly and dangerously risking Israel’s security.

A. Idlib, in northwest Syria, is the current focus of fighting and massive humanitarian suffering in the Arab Middle East. Three million Syrians are directly affected. Nearly one million are defined as refugees. Idlib became the focus of this catastrophe through pure hypocrisy on the part of Syrians, Iranians, Russians and Turks. To understand how and why, we have to go back in time to late 2015, when Russia joined Iran in intervening in Syria to save the Assad regime.

One of the tactics introduced to the Syria conflict by the Russians, after perfecting it against Islamist rebels in the second civil war in Chechnya (which ended in 2009), was to offer surrounded rebels the choice of fighting to the finish and dying, or safe passage to a demilitarized safe zone in Idlib. Tens of thousands of rebels, cornered with their families in enclaves and anxious to protect them, chose Idlib.

For a while, this tactic hastened the impression that the fighting in Syria was over. The Assad regime reestablished its rule throughout most of western or “useful” Syria. Relatively friendly Kurds, supported by the US, ruled eastern Syria. Idlib was a footnote.

But the Russians had different intentions. The Idlib deal was temporary and totally hypocritical. An Islamist-ruled enclave on Syrian territory could not be allowed to survive. Now, with the remaining Islamist rebels concentrated in one place, a systematic Syrian offensive against them could begin, backed by Russian fighter-bombers and Iranian proxy forces. The Russians never intended otherwise.

The only wrinkle in Russia’s strategy is Turkey, which borders Idlib to the north. The Erdogan government in Ankara, with its Islamist leanings, is sympathetic to the Syrian Islamist rebels, many of whom it permitted to enter Syrian territory in the first place. Based on its experience in 2015, it also views the Idlib rebels cynically as a card to play in Turkey’s relations with Europe: If the European Union doesn’t funnel billions of euros to Ankara, the Syrian Islamists will be allowed to flee to Turkey and from there, as refugees, into Europe, where they will cause huge ethno-political disruption in countries like Germany, Italy and (Brexit) the UK.

To maintain order in Idlib and look after Turkey’s presumed interests while keeping it friendly, Russia and Iran felt obliged to allow the Turkish Army to establish observation posts there. Now Turks are fighting Syrians in Idlib, while Islamists are fighting Syrians, Russians and Iranian proxies. Nobody--Russia, Iran, Syria, Turkey--has been honest about its true objectives in Idlib. Nor is it likely the Syrian Islamist rebels ever really believed the Russian promise of safety in Idlib. They just wanted to live to fight another day.

Q. Is Russia any less hypocritical in its attitude toward Israeli attacks against Iranian weapons shipments and weapons depots in Syria?

A. No. Moscow warns Israel at both the diplomatic and the military liaison level to cease these attacks. Israel nevertheless attacks (reportedly; it rarely takes credit openly), and Russia suffices with yet another admonishment. On Monday February 17 Yedioth Aharonot’s strategic commentator Alex Fishman neatly summarized Russia’s current cynical approach to both Israel and Turkey with regard to Syria:

The Russians are planning to remain permanently in Syria, and to that end the Czar is disciplining the local principalities with sticks and carrots. Today he is busy training two difficult clients, Israel and Turkey. Putin opens the door and answers the phone to both Erdogan and Netanyahu. He gives them the impression they are partners in managing the region. But Erdogan already understands that behind the smiles and weapons sales, Putin in fact deceived him: he did not honor the agreement to disarm Idlib, while he drove a wedge between Turkey and the Americans. Israel, too, was deceived by the Russian president when he promised to keep the Iranians dozens of kilometers away from its border [with Syria]. Yet we still pretend we are dealing with a true friend.

The Syria scene, in short, features Russian hypocrisy in every dimension.

Q. Further afield, on the margins of the Middle East?

A. Afghanistan and Ethiopia offer two classic examples of hypocrisy at work.

In Afghanistan the US is negotiating a peace agreement with the Taliban. The US will begin seriously removing its armed forces, more than 18 years after its post-9/11 invasion, if the Taliban keeps the peace and avoids violence for as little as one week. If this works, ultimately the shaky “democratic” government of Afghanistan and the Taliban will be on their own, while President Trump takes credit for having brought the boys (and girls) home.

Do any of the principals delude themselves that this will end up any differently than following the US withdrawal from Vietnam that ended that war and precipitated the fall of Saigon in 1975? The outcome is obvious to all the hypocrites involved. We can only hope that the Taliban, once back in power in Kabul, will this time around avoid the mistake of harboring al-Qaeda or a similar Islamist terrorist organization.

Turning to Ethiopia, we are looking at a frightening regional catastrophe in the making--one that everyone involved pretends can somehow be avoided through diplomacy. Ethiopia is building a huge hydroelectric dam, backed by a huge lake, near the source of the Blue Nile. The Blue Nile flows from Ethiopia into Sudan, where it joins the White Nile. The Blue Nile’s waters constitute 80 percent of the combined Nile River that flows from Sudan into Egypt. The Nile itself provides 90 percent of Egypt’s water. It is Egypt’s existential core.

Egypt’s population just passed the 100 million mark, and it continues to grow by leaps and bounds. It will soon not have enough water to drink, much less to irrigate its fields. In other words, Egypt is looking at a water crisis even before the damage that will be done when Ethiopia starts filling its new lake with Blue Nile water. Ethiopia needs that water to operate the dam’s turbines and provide power for Ethiopia’s own 100 million-strong population.

Ethiopia, Sudan and Egypt have been negotiating to prevent a crisis for several years under African Union auspices. Fruitlessly. Lately, the Trump administration has entered the picture as a facilitator. Legally and diplomatically, an old treaty under which the British divided up Nile waters between Egypt and all other Nile riparian countries, giving Egypt the lion’s share, is disputed. Egypt is invoking the treaty; Ethiopia denounces it as a colonial-era relic.

Egypt has begun constructing a new naval port on its Red Sea coast. That can be understood by Ethiopia as a threat. There are precedents for armed conflict: in the mid-1870s, Ethiopia repelled an Egyptian invasion.

There is no win-win option here. Everyone knows it.