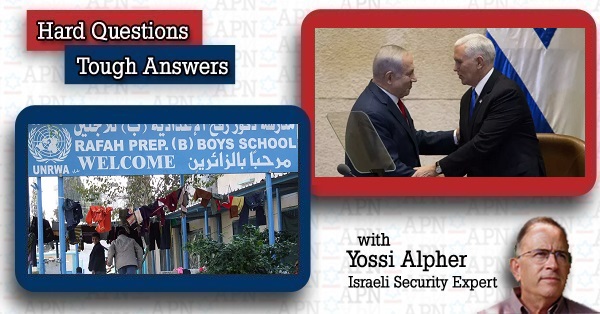 This week, Alpher discusses why US Vice-President Mike Pence is visiting Israel; why the Trump administration is withholding financial aid to the Palestinians; Secretary of State Tillerson's announcment that US troops will remain in Syria even after the final defeat of ISIS; and whether the Trump administration is performing worse in the Middle East than its predecessors.

Q. Why is US Vice-President Mike Pence visiting Israel?

A. That’s what many Israelis and Palestinians are scratching their heads about and asking themselves. I can’t recall a high-level American visit that was so solidly boycotted by Palestinians and so devoid of diplomatic content. Prime Minister Netanyahu made a point of noting that he would be discussing the Iranian threat with Pence--as if the American vice-president has anything of substance to say or do in that regard.

Pence’s arrival was so low-key as to be unnoticeable. He was met on arrival at Ben Gurion airport by Israel’s minister of tourism, Yariv Levin, and US Ambassador Friedman. He is not invited to Ramallah (conveniently, President Abbas is in Brussels) and has been dis-invited to Bethlehem. The Knesset’s Palestinian Arab members plan to walk out on his speech there.

Pence is not a member of the Trump peace team. That may make his visit easier, considering that the Trump peace plan, the “deal of the century”, is, according to Israel’s former consul-general in New York Alon Pinkas, “like the Loch Ness monster: tens of thousands talk about it, dozens claim to have seen it, a few swear they have proof of its existence, yet . . . there is no American peace plan beyond a partial ‘cut and paste’ of the Clinton parameters.”

Pence is a devout evangelical Christian. As such, Israel has a special place in his cosmic view. That is a place many thinking Israelis are very uncomfortable with at the existential level but most Israelis are happy to accommodate at the mundane tactical level of encouraging and welcoming political friends. In this sense Pence’s visit, which Pinkas calls “a ‘Seinfeld visit’: a visit about nothing”, is first and foremost good for Pence and good for PM Netanyahu’s increasingly important US evangelical base. Lest we forget, Pence is a mere high cholesterol count or impeachment vote away from the Oval Office.

Q. Why is the Trump administration withholding financial aid to the Palestinians?

A. Like President Trump’s December 2017 recognition of Jerusalem as Israel’s capital, his decision to withhold a large portion of the US annual contribution to UNRWA, the UN agency for Palestinian refugees, plays ostensibly to an obvious truth regarding the Palestinian issue. Yet like the Jerusalem proclamation, in reality this Trump decision inflicts mindless damage on all parties. Mindless is the key word here: there is no evidence of an overriding strategy behind these decisions.

It is hard to dispute the contention that UNRWA, the United Nations Relief and Works Agency for Palestine Refugees in the Near East, is a perpetuator of the Israeli-Palestinian conflict rather than an instrument for resolving it. By bestowing refugee status on all descendants of the original 1948 refugees it merely enlarges the problem from generation to generation. It does not resettle refugees because both they and the Arab host countries reject that option. For them and for the Palestinian national movement, UNRWA sustains the “right of return” of more than five million people, 70 years later, and thereby keeps the conflict alive and festering. Note that the UN High Commissioner for Refugees, an institution that deals with all other refugee issues worldwide, is dedicated to resettling refugees as quickly as possible.

But UNRWA feeds, educates and clothes millions of Palestinians, many of them in the destitute Gaza Strip. Reduce its funding precipitously and you exacerbate the already volatile situation in Gaza and in the Palestinian refugee camps in Lebanon. Israel will pay the price, in the form of renewed warfare and/or additional humanitarian aid that it will have to provide to avoid or mitigate a “photo op” catastrophe.

The Trump administration seems incapable of zeroing in on the real problem of UNRWA, which is its existence as a calculated Arab marker of refusal to come to terms with the corollary of Israel’s existence: the need to solve the refugee issue elsewhere than in Israel. UNRWA and a genuine two-state solution, which the Arab world also openly supports, simply don’t go together. If the Trump peace team were to begin by working with the Arabs on an early start to a long-term plan to phase out UNRWA and resettle the refugees, conditioned on an eventual agreed two-state solution, it might create some hope on the horizon. That would require twisting not a few Arab arms and slaughtering a 70-year old sacred cow, but it would constitute a solid contribution toward a peace process.

Instead, Trump claims the United States “get no appreciation or respect” from the Palestinians for its aid. By that he presumably means it gets no “economic peace” concessions to his peace team, which apparently believes it can buy Palestinian compliance. Trump also alleges the Palestinians should be punished for not negotiating--even though there is no peace initiative on the table. The administration wants the rest of the world to pay a larger share of international aid, which is fair enough, and that is apparently what will happen with UNRWA. But taken together with the damage done by the Jerusalem declaration--the Palestinian cold shoulder to Pence is just one manifestation of Arab anger--the UNRWA step moves Washington further toward the very margins of great power influence in a critical part of the world.

Q. Last week, Secretary of State Tillerson announced that US troops would remain in Syria even after the final defeat there of ISIS. Doesn’t this commitment balance reduced US involvement in the Palestinian issue?

A. Tillerson specified US goals in Syria as eliminating ISIS and al-Qaeda, diminishing Iran’s influence, keeping Syria free of weapons of mass destruction, helping Syrian refugees return, and assisting a UN-led procedure for replacing the Assad government democratically. Some of these objectives, like eliminating militant Islamists, are feasible but are being carried out primarily by the Assad regime, Russia and Iran. Others, like weakening Iranian influence and replacing Assad, can hardly be accomplished by a 2,000-strong US military presence on the geographical margins of the Syrian heartland.

That presence is in north-eastern Syria, where it is designed to bolster Kurdish forces that have achieved a significant degree of regional and political autonomy and to reward them for their impressive performance against ISIS in eastern Syria. But the Kurds’ achievements--they just gained a US pledge to train a 30,000-strong border patrol force--are understood as a threat by another US ally, Turkey to the north of Syria. Ankara, Washington’s NATO partner, just invaded Syrian Kurdish territory precisely because of these concerns, and it has done so in coordination with Moscow, not Washington--a worrisome precedent.

Rather than sending a message of a meaningful and actionable US commitment to the future of a democratic Syria, the strategy enunciated by Tillerson is understood by Washington’s rivals in the region as an admission of the status of minor power. Syria’s fate is being decided in meetings convened by Moscow, not by the United States or even the United Nations. As the radically-oriented Conflicts Forum gloated last week, “Deploying a ‘small’ US occupation force in north-eastern Syria stands not so much as a threat to Iran but more as a hostage to Damascus and Tehran. . . . The reality is that Iran and its regional allies (Syria, Lebanon, Iraq--and to an unpredictable extent, Turkey) are, in fact, ‘containing’ (i.e., militarily deterring) America and Israel.”

There is almost certainly a measure of exaggeration in this assessment. Neither Israel nor America, each with its own reasoning, is “contained” in the region. But Israel can hardly take comfort in a US presence in Syria that is far from Israel’s own northern borders where the Iran-Hezbollah threat is growing and where the only great power that might conceivably exercise influence is Russia. Note, too, the US military presence in Syria is, put simply, illegal: it is authorized neither by Syria nor by Congress.

A large US military contingent has occupied all or parts of Afghanistan since 2001 without either eliminating militant Islam or stabilizing control by a democratic government. Tillerson now seemingly champions similar goals in Syria, citing the Obama administration’s early withdrawal from Iraq as a mistake not to be repeated. I would argue that in all three countries US goals were never realistic and never feasible. But the US in Syria with 2,000 troops? In one corner of the country? With Russia and Iran occupying the rest?


Q. Bottom line: is the Trump administration performing worse in the Middle East than its predecessors?

A. Not yet. After all, Bush’s 2003 invasion of Iraq, Obama’s 2011 Iraq withdrawal and his 2013 failure to enforce a chemical weapons red-line against the Assad regime are hard to match. Precisely because the US presence in Syria is marginal, and because Iran and Russia arrived on Obama’s watch and Turkey’s tilt toward Islamism is not Washington’s fault, the outcome can be no worse than a marginal setback for Trump.

On the other hand, if Trump succeeds in persuading the Palestinians and other Arabs that the US is no longer an acceptable sponsor of Israeli-Palestinian peace, that will certainly qualify.