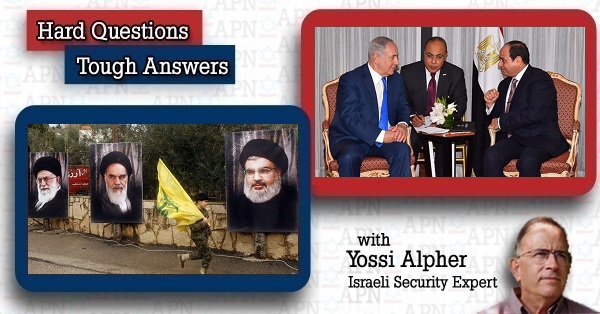 This week, Alpher discusses whether we are on the verge of Israel's "first northern war"; what happened on Saturday; why this is a preview and a catalyst; whether there are potentially mitigating factors and actors; Israel's ongoing disputes with Lebanon that could escalate; where the US fits in; Secretary of State Tillerson and National Security Adviser McMaster's upcoming trip to the region; and the looming threat of indictment for corruption influencing Netanyahu’s behavior toward the growing threats from Israel’s north.

Q. Are we on the verge of Israel’s “first northern war”?

A. “First northern war” is the term now used by Israeli security planners to describe what they anticipate: a war pitting Israel against hostile Shiite and quasi-Shiite Islamist forces gathering in Syria and Lebanon. These comprise Syria, Iran, Shiite proxy militias recruited by Iran from Iraq, Afghanistan, Pakistan and as far afield as Uzbekistan, and Hezbollah. What happened on Saturday, February 10, appears to have been both a preview and potentially a catalyst for near-term escalation.

A. Iranian forces sent an Iranian drone from an Iranian base in Syria into Israeli airspace. An Israel Air Force helicopter shot it down at around 4 a.m. Saturday. There followed a retaliatory Israeli strike against the Iranian base deep inside Syria. One of the Israeli attack planes, an F-16, was shot down over Israeli territory by a Syrian surface-to-air missile. Israel responded with a heavy air attack against multiple Syrian air defense bases and additional Syrian and Iranian military targets on Syrian soil, causing extensive damage in Syria not seen since the 1982 First Lebanon War.

Israel insists the Iranian drone penetration constituted premeditated Iranian aggression against Israeli territory. Israel appears to have had early warning of the drone and to have ambushed it. It is still not clear what the drone was supposed to do at 4 a.m: gather intelligence, attack something, or, most probably, “show the flag” aggressively against the “Zionist entity” to celebrate the anniversary in Iran of the 1979 Khomeini revolution. Iranian explanations thus far are contradictory and insist the drone was not meant for Israel.

The Syrian missile that downed the Israeli F-16 was an old model. The F-16 is a very modern aircraft. Syria has consistently tried to shoot down an Israeli attack plane on the more than 100 missions the IAF has flown against Iranian-Hezbollah-Syrian munitions on Syrian soil in recent years. Until Saturday Syria failed. That the IAF proceeded to fly multiple successful attack missions into Syria following the downing of the plane reflects Israeli confidence that this was an isolated loss (the two wounded pilots who bailed out are safe in Israel), albeit an embarrassment.

Q. Why do you see this as a preview and a catalyst?

A. Israel and Iran’s coalition to its north have been in effect fighting each other under the radar until now. Many early Israeli air attacks against Iranian munitions in Syria were ignored or not even mentioned by Damascus and Tehran. If Syria fired surface-to-air missiles, they missed their targets, while Israel’s response was pinpoint and limited. On the ground, isolated clashes between the IDF and Hezbollah forces and Iranian personnel along the Golan border at least temporarily persuaded the latter to keep their distance.

All this changed on Saturday. True, the drone incident could conceivably have been the result of a mistake or miscalculation at the Iranian end. But even if that is the case, this is how escalation toward war can begin in our part of the world.

Saturday’s clashes reminded me of April 7, 1967, when growing Israeli-Syrian tensions on the ground regarding water and disputed territory led to dogfights over the Golan in which the IAF shot down six Syrian MiGs. From there it was all uphill escalation to the Six-Day War: Israel threatened, Syria appealed to Egypt, Russia spread false warnings about Israeli intentions, Nasser threatened, the United Nations removed its buffer force from Sinai, etc.

The most striking precedents on Saturday were Iran’s drone aggression, Israel’s attack on an Iranian base in Syria, and the destruction by Israel of nearly half of Syria’s anti-aircraft capacity. Iran is now warning Israel against further attacks on Syria. Israel says it will continue to interdict Iranian arms shipments on their way to Hezbollah. All this is potentially escalatory.

Q. Are there any potentially mitigating factors and actors?

A. Yes. Hezbollah in Lebanon, with its 100,000 missiles and rockets pointed at Israel, stayed out of the fray. Russia, with its strategic presence in Syria, maintained contact with Israel, did not intervene, and ultimately blandly condemned all violations of Syrian sovereignty. In Israel and even on the Golan, Saturday tourism and skiing were encouraged and an effort was made to portray business-as-usual.

Q. Yet Israel has a number of pressing ongoing disputes with Lebanon that could also escalate.

A. That is precisely why the absence of input by Hezbollah on Saturday helped contain the fighting. Lebanon has three territorial complaints against Israel. One is the IAF’s use of Lebanese airspace for aerial reconnaissance and air-launched missile attacks into Syria. Another is Israel’s construction of high defensive walls at several points along the Israel-Lebanon border, which Beirut claims is taking place on Lebanese territory. A third concerns gas drilling rights in the Mediterranean where the Israeli and Lebanese delineations of their respective EEZs (exclusive economic zones) overlap.

Israel argues it will infringe on Lebanese airspace as long as Lebanon cedes its sovereignty to Hezbollah, which is based just north of the border and preaches Israel’s destruction. Israel claims that the walls it is building are meant to prevent or delay attacks by Hezbollah into Israeli communities just south of the border. Israel also argues that the walls are on parcels of sovereign Israeli territory not included back in 2000 in Israel’s UN-approved border fence due to topographical considerations but nonetheless certified as Israeli by the United Nations.

As to the EEZ dispute, which is not new and where earlier US attempts at mediation have failed, Israel has avoided licensing drilling in the controversial wedge of sea bottom defined by the competing delineations. But Lebanon has now issued drilling permits of its own in the disputed zone. At stake are tens of billions of dollars in potential energy earnings.

Q. Where does the US fit in?

A. The absence of any significant American diplomatic or military input on Saturday, or for that matter prior to Saturday with regard to the Israel-Iran confrontation in Syria and Lebanon, must be seen as an alarming factor. The Trump administration sufficed on Saturday with a declaration of support for Israel. But there is no strategic US presence anywhere to be seen. The only parts of Syria where the US has a small (2,000 troops? 5,000?) military presence are in the east of the country, hundreds of kilometers away. There, the US is part of a totally separate theater of tensions pitting American-supported Syrian Kurds and Arabs against the Assad regime and, alternatively, against Turkey, which has invaded northwest Syria.

Further, President Trump’s threat to cancel US participation in the JCPOA Iran-nuclear deal is most likely encouraging Iranian military activism in Syria and even in Lebanon, where Iran intends to construct missile factories for Hezbollah. Trump, unlike his much maligned predecessor Obama, has no levers of influence over Iran.

So the US either does not fit in or it fits in negatively. The only relevant outside power is Russia. Until Saturday, President Putin skillfully balanced his strategic coordination with Israel with his strategic interest in Syria and strategic partnership there with Iran. At around noon on Saturday, too, he apparently “persuaded” Israel, Iran and Syria to desist. But this trick will be increasingly difficult to pull off if and as tensions escalate between Israel and the Iran-Syria-Shiite-mercenary alliance.

Q. Aren’t Secretary of State Tillerson and National Security Adviser McMaster on their way to the Middle East this week?

A. Yes, on a visit planned prior to Saturday. They will be visiting Lebanon and had reportedly intended to look into the border fence and EEZ disputes, any one of which could cause military escalation between Israel and Hezbollah. But the US does not talk to Hezbollah. And the two Americans will not be going to Damascus, where Washington continues to insist, against the reality of the Assad regime’s survival and resurgence, that Assad must go. Nor are they planning to stop off in Israel. As for the Lebanese government and armed forces, they are so weak, ineffectual and subservient to Hezbollah--which is likely to win big in Lebanon’s May parliamentary elections--that it is almost not worth the visit.

Q. Is the looming threat of indictment for corruption influencing Netanyahu’s behavior toward the growing threats from Israel’s north?

A. “Netanyahu’s two-front war against Iran and Israeli police” was one of Sunday’s headers in Haaretz. Obviously, a genuine war could postpone Netanyahu’s increasingly likely date with the courts. On the other hand, the civilian casualties Israel is likely to suffer from Hezbollah’s Iranian and Syrian rocket/missile arsenal in the next war could well jeopardize the reputation of any Israeli political leader (see for example PM Olmert’s fate following the 2006 Second Lebanon War). So toying with conflict in the north is hardly a safe diversion.

One way or another, Netanyahu’s handling of the threat from the north since his return to power in 2009 has, in my opinion, been admirably cautious and responsible. That goes for Saturday’s performance as well. Obviously, “cautious and responsible” does not apply to his handling of the Palestinian issue or to his personal and family ethics and standards.

A. First, Saturday moved us closer to the “first war of the north”. When that will happen, under what circumstances and with what degree of ferocity is impossible to say. There are simply too many actors at play. A single miscalculation could be crucial.

Second, Saturday’s fighting was one more indication that, rather than winding down, the violence in Syria is metamorphosing. True, the regime is retaking control in many parts of the country. It has stabilized. The Syrian armed forces are rebuilding. But now, instead of an insurrection against Assad and instead of a war against Assad by ISIS, we have heavy fighting in Syria’s northwest involving Turkey, Kurds, anti-Assad Arabs, Russia and even the US in a turf war. And we have looming clouds of war in southwest Syria and southern Lebanon involving Syria, Iran, Hezbollah, Shiite militias and Israel.

Finally, if any single actor can deescalate this first war of the north, it is Russia. But Moscow probably believes that its interests benefit more from rising tension than from de-escalation. That is a dangerous calculation.