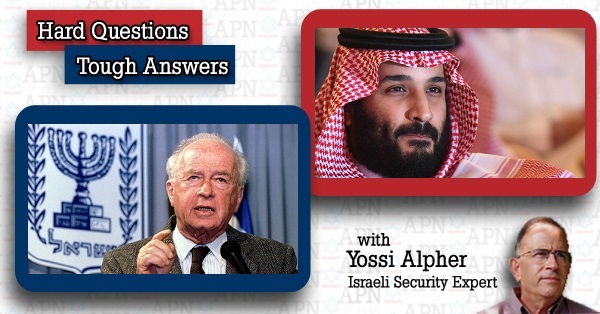 This week, Alpher discusses whether, with developments in Lebanon and Syria, the Middle East is about to boil over; the Syria agreement and the gap between what it offers Israel and what Israel wants; whether the Saudis are inciting Israel to attack Hezbollah; whether the Saudi-Iranian confrontation is spilling over into the Palestinian arena; IDF Coordinator of Government Activities in the Palestinian Territories Major General Yoav (Poly) Mordechai's warning to Islamic Jihad that it not attack Israel; and the bottom line.

Q. Israel is alarmed and disappointed with a US-Russian-Jordanian agreement regarding Iranian forces near the Israel-Syria border. The IDF is explicitly warning Gaza-based Islamic Jihad not to attack Israel. And in Lebanon, Hezbollah leader Nasrallah accuses Israel of planning to attack on behalf of Saudi Arabia. Is the Middle East about to boil over?

A. Some of the statements of recent days are probably empty posturing. But clearly the atmosphere is heating up on all three fronts. And clearly those fronts are linked, not only with one another but with the waning prospects of a Palestinian unity government and the weak US role in Palestinian and other Middle East affairs.

Q. Let’s start with the Syria agreement. How large is the gap between what it offers Israel and what Israel wants? And why can’t Israel persuade the Russians and the Americans to do more?

A. Israel and its Sunni Arab neighbors want Iran out of Syria and the Levant. Until that happens, Israel wants Iranian forces and those of its Shiite proxies from Lebanon (Hezbollah), Iraq, Afghanistan and elsewhere far enough from the Golan border--50 or 60 kilometers (31-37 miles)--to eliminate them as an immediate factor in any future fighting. The agreement unveiled over the weekend only vaguely commits to an eventual Iranian withdrawal from Syria. And it appears to place Iran’s forces between 5 and 20 km (3-12 miles) from the Golan border. Add to this the BBC’s revelation that Iran is building a small base some 50 km from the border. Israel’s resultant concern was made plain by IDF Chief of Staff Eizenkot’s emergency trip to EUCOM headquarters in Brussels on Saturday to meet with the commander of US troops, General Curtis Scaparrotti.

That Israel cannot persuade Russia to distance the Iranians is not hard to comprehend. Iran is both Syria’s and Russia’s ally in Syria. Russia plans to maintain bases in Syria over the long term, hence must find accommodation with its allies there. Then too, Russia has repeatedly stepped aside when Israel has attacked Iranian and Syrian arms shipments from Syria to Hezbollah in Lebanon. Moscow’s response to Israeli protests over the new agreement is presumably, “You are by far the strongest military actor in the region; we respect you and will not interfere in future if you feel you have to act in Syria.”

How much trust Israel can place in that sort of reassurance is an open question. But for the moment Israel has little alternative, particularly in view of Washington’s reticence to get involved.

Indeed, the United States is a different issue. Its dealings with Russia regarding Syria, including statements emerging from Trump-Putin discussions in Asia in recent days, appear to reflect a distinct American inclination to yield Syria to the Russians and only weak US objections regarding Iran’s role there. After all, if Trump can--or wants to--believe Putin’s protests regarding Russian non-involvement in recent US elections, he clearly is not about to confront Russia regarding Iran in Syria.

American general disinterest touches on the Palestinian issue as well. Even if, against all the odds, the US peace team of Kushner and Greenblatt comes up with a reasonable-sounding proposal early next year for progress between Israel and the Palestinians, Washington is already going to some lengths to make clear that this will be little more than a non-binding set of ideas that involves the Sunni Arab states as well.

Q. But those states are in disarray. Qatar has been pushed by the Saudis into the Iranian-Turkish camp. Lebanon’s Sunni prime minister is under virtual house arrest in Riyadh. To listen to Hassan Nasrallah, leader of Lebanon’s dominant Shiite militia Hezbollah, the Saudis are inciting Israel to attack Hezbollah.

A. Lebanese PM Saad Hariri, with not a little coaching from Saudi Crown Prince Muhammed bin Salman (MbS), has accused Iran and its proxy Hezbollah of plotting to kill him and take over Lebanon. This has drawn Lebanon squarely into the growing confrontation between Saudi Arabia and Iran. Against this backdrop, it is convenient for Nasrallah to portray Israel as a Saudi proxy.

This is hardly the case. If and when Israel responds to looming threats from Syria and Lebanon, this will presumably reflect Israeli rather than Saudi calculations. Yet this merely underlines the question mark hanging over PM Netanyahu’s knee-jerk directive to Israel’s diplomats abroad to line up specifically behind the belligerent Saudi position regarding Lebanon and Iran. Does Netanyahu not dare put some rhetorical distance between Saudi acts of provocative folly and Israel’s need to display caution and circumspection regarding threats from the north?

Here we recall that various Saudi spokesmen have over the years, officially and unofficially, encouraged Israel to deal with the shared Hezbollah enemy--down to the last Israeli. I recall in the summer of 2006, just as Israel’s Second Lebanon War was beginning, being advised regarding Hezbollah by a Saudi security expert, “This time, do it right”.

Incidentally, around 300,000 Lebanese breadwinners (out of a population of five million Lebanese) are currently employed in Saudi Arabia--a potential source of direct pressure from Riyadh on Lebanon.

Q. Is the Saudi-Iranian confrontation spilling over into the Palestinian arena?

Against this backdrop, MbS apparently told Abbas to slow down even further the Egyptian-engineered rapprochement between the PLO and Hamas. Translated into language relevant to Hamas, this took the form of renewed Fateh/PLO demands that Hamas surrender all its weapons and its forces in Gaza to PLO command, for example at the as-yet closed Rafah crossing between Gaza and Egyptian Sinai, which the PLO is supposed to reopen. Earlier, Abbas had declared that the future reconciliation government would comprise only Hamas ministers who recognize Israel.

All these demands are virtual non-starters from Hamas’s standpoint. There is little if any indication it will comply.

Q. Finally, on Saturday, in an extraordinary TV broadcast, IDF Coordinator of Government Activities in the Palestinian Territories Major General Yoav (Poly) Mordechai warned Islamic Jihad in Gaza and its headquarters in Damascus not to attack Israel. Is this part of the same complex of threats pitting the Saudis against Iran?

A. Only indirectly. Islamic Jihad (IJ) in Gaza is still smarting from the loss of 14 men in an attack tunnel it was digging under the border into Israel. The men, five of them apparently from Hamas, were killed when Israel blew up the tunnel from the Israeli side and it subsequently collapsed on the Gaza side of the border. In a mindboggling exercise in the logic of revenge, IJ is accusing Israel of aggression and murder, even though the attack tunnel itself constituted aggression, Israel’s response was confined to Israeli territory, and the IDF went out of its way to explain that it was targeting the tunnel and had no prior knowledge of Jihad attackers in the tunnel.

Ever since the tunnel incident, IJ has vowed revenge. Apparently, over the weekend the IDF got wind of an attack directive from Damascus, where IJ is clearly under the wing of the Assad regime, hence Iran.

A lot depends on Hamas in Gaza. If it is still interested in and committed to reconciliation with Fateh/PLO in the West Bank, it presumably will try to restrain IJ. On the other hand, if Iran and its proxies and allies now view the reconciliation as an instrument of Saudi and even US policy--by way of readying the territory for a peace initiative that requires major Arab input--IJ may get the green light to strike and risk renewed Israeli-Palestinian escalation. Then there is the Saudi position: if indeed MbS fears Palestinian reconciliation could at this juncture strengthen Iran-linked Hamas and therefore is telling Abbas to hold off or pose impossible conditions, Iran has an entirely contrary reason to encourage an IJ attack on Israel.

Q. It is indeed. What’s your bottom line?

A. Saudi Arabia under MbS has proven, in Yemen, to be the region’s most inept military actor. Nor have MbS’s political strategic initiatives, for example toward Qatar and now Lebanon, been particularly well-considered. Not only is MbS making enemies at home with his anti-corruption campaign and arrest of more than 200 princes and businessmen, but now he is liable to alienate neighbors like Egypt, which has a major stake in peace and quiet in the Gaza Strip.

Still, MbS cannot be blamed for the growing tension on Israel’s Golan border with Syria. Here, at least in Israel, the disappointment is with the Trump administration.