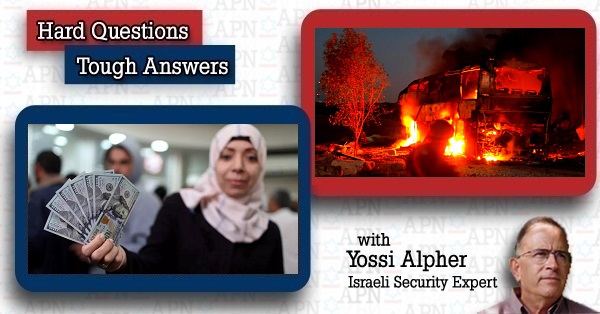 Q. Is this week’s subject line intended to suggest that a lot is happening tactically regarding Israel’s key security and political interests but nothing is transpiring strategically?

A. Precisely. Seemingly dramatic developments regarding Gaza--cash dollar deliveries from Hamas, an Israeli commando raid--not only change nothing strategically but are intended to change nothing. A host of senior Israelis are accused by the Israel Police of corruption regarding a submarine deal, but their boss, Netanyahu, is not affected. Talk of new Knesset elections earlier than a year from now remains just that--talk. A tense status quo holds on the Syria/Iran/Russia front to Israel’s north. Even the US midterm elections appear to have changed nothing in the Middle East.

Q. Let’s start with Gaza. A few days ago, three suitcases loaded with $15 million in cash, courtesy of Qatar, were allowed by Israel into Gaza where they immediately paid long-delayed salaries. Was this sophisticated diplomacy or a mafia operation?

A. A little of each--with, at best, short-term tactical goals on all fronts. Israel believes the Qatari cash, along with augmented Israeli fuel shipments paid for by Qatar, boost economic stability in Gaza. It expects the Strip’s Hamas rulers to reciprocate with peace and quiet along the border. It’s not Israel’s money, so as long as it doesn't buy arms for Hamas, why not?

Meanwhile, by stabilizing Hamas rule in Gaza the Qatari aid also keeps Gaza separate from the PLO-ruled West Bank, where President Abbas in any case refuses contact with Hamas, the US or Israel. That serves the intention of PM Netanyahu’s ultra-nationalist coalition to prevent the emergence of any sort of peace process that requires united Palestinian representation. Peace proposals from both the Trump administration and the French government are anticipated in the months ahead. Netanyahu needs to be ready to rebuff one or both of them elegantly. Then too, by working with Qatar, Netanyahu can signal both Egypt and Saudi Arabia that Israel has multiple alternatives regarding short-term deals with Hamas in Gaza.

Then too, by working with Qatar, Netanyahu can signal both Egypt and Saudi Arabia that Israel has multiple alternatives regarding short-term deals with Hamas in Gaza.

Just to make sure everyone understands the limitations of those deals, Netanyahu told Likud members of Knesset last week that “occupation is nonsense” (“kibbush hu kishkush”--sounds better in Hebrew). He continued: “There are huge countries that conquered and exchanged populations and no one talks about them. Power is the key. Power alters everything in our policy vis-à-vis countries of the Arab world.” In Paris on Sunday he added that Israel cannot negotiate with Hamas because Hamas wants to destroy Israel.

Israel indeed cannot negotiate peace with Hamas. Yet Netanyahu hopes the Qatari cash will help bring about a “hasdara” or short-term ceasefire with Hamas. Until, that is, the next round of heavy violence. The entire “cash in suitcases” affair with the Strip merely emphasizes that Israel not only has no strategy for Gaza, but it has absolutely no strategy and no intention to resolve the entire Palestinian issue. Nor, for that matter, is Israel a "huge country" that can forever ignore international protests and pressure.

A. The Israel Police call this File 3000. They are still investigating files 1000, 2000 and 4000--all corruption cases with apparent links to PM Netanyahu. And Netanyahu’s wife Sarah is in court fighting charges of embezzlement of around $100,000 in funds intended for operating and maintaining the prime minister’s residence.

Under File 3000, the police are officially accusing six serving and former officials of bribery regarding a multi-billion dollar Israeli procurement deal for submarines and other navy ships from a German shipyard. The officials include Netanyahu’s personal lawyer (who is a relative) and former heads of the Israel Navy, National Security Council, PM’s staff and the navy commandos. The issues at stake involve Israel’s most sensitive strategic defenses.

This then is the first of four corruption cases to be delivered by the police to the attorney general for a decision regarding criminal charges. It has taken years to develop this case. No one really knows how long it will take to develop the others, if indeed the police find cause to do so.

It is inconceivable to anyone with high-level national security experience that the man who served as prime minister over the past nine years was not aware of the File 3000 skullduggery going on around him and among his intimates. Yet so far Netanyahu is “Teflon”, an image he needs to maintain as elections loom.

Q. Elections, as noted, must take place by next November but could be moved up should Netanyahu dissolve his coalition or should it implode over some divisive political or security issue.

A. Here the interaction with the Gaza situation and the multiple police investigations is obvious. So far Netanyahu has sufficed with endless, almost weekly threats: we almost invaded Gaza; my coalition partners’ obstinacy could force early elections; etc. Then there is the speculation that the threat of criminal charges being brought against him could cause him to resign, either before or after (he presumably wins) elections.

Indeed, as matters stand, with or without war with Gaza and/or an indictment, Netanyahu is heavily favored to win any election he runs in during the year ahead. There is simply no convincing challenge either within his Likud party--where he makes sure to banish potential successors--or among opposition parties.

Q. And on the Syria front?

A. Relations are tense with the Russian military in Syria. Israel Air Force attacks on Iranian bases and munitions on Syrian soil apparently continue despite President Putin’s anger over the downing of a Russian military plane by Syrian missiles in the course of an Israeli attack a few months ago. Even the critical role in Lebanon’s coalition-formation stalemate played by Hezbollah, Iran's ally and proxy in Syria and Lebanon, is a factor.

So is the abject destruction and poverty confronting Syria following seven years of civil war and considering President Assad’s determination to brutally punish the millions of displaced and refugee Syrians who opposed his rule. For all these reasons and more, decisive action on this front does not appear likely in the months ahead unless some disastrous mishap triggers a war..

Q. That leaves the US midterm election outcome on your list of tactical developments that change nothing in the Middle East. This is beginning to sound like Seinfeld, “a show about nothing”.

A. Does a Democratic majority in the House of Representatives threaten to derail President Trump’s unique style of supporting Israel or Saudi Arabia? Does Trump’s ongoing dismantling of the Iran nuclear deal, the JCPOA? Will the Trump administration now play a stronger role in blunting Iran in Syria or opposing Russian hegemony there? The answer to all these questions is apparently in the negative. Indeed, whether or not, and when, Trump’s “ultimate deal” for the Israeli-Palestinian conflict is unveiled, it is hardly likely to be affected by his attitude toward Congress.

Over the long term, the election to the House of Representatives of a couple of Muslim women along with a few additional far-left Democratic critics of Israel could potentially prove to be an interesting development. But as matters currently stand, Trump has to be considered as likely to succeed himself next election as is Netanyahu.

This means more of the same for Netanyahu. For the foreseeable future he can continue to cultivate an international ultra-nationalist support base for policies that are driving Israel, unfettered by external conflict, toward an ugly, conflicted one-state reality.