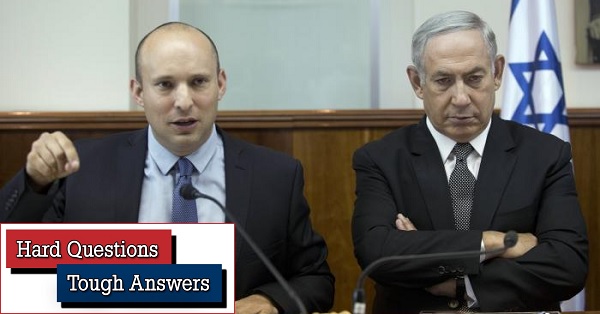 Q. You are writing one week before Israel’s third straight Knesset election in a year, this one on March 2. Are the prospects any different this time?

A. Polling results have barely changed. Likud and Blue-White remain neck-and-neck. The centrist bloc and the Likud-right-religious bloc remain tied, with neither able to muster a 61-mandate majority to form a government. There is much talk of yet a fourth round of Knesset elections in September.

Still, a number of factors—some new on the scene, some repeats or constants—could still affect the outcome.

A. The trial opening scheduled for March 17 is a brief formality. But it poses the possibility that, in the event of yet another electoral stalemate outcome, and with Netanyahu facing an immediate trial on multiple corruption charges, President Rivlin will intervene more forcefully than previously. Rivlin could, on the mandated date of March 15, and even if Likud appears to have a better chance than Blue-White, refuse to award Netanyahu the first crack at forming a government and ask Likud to appoint someone else.

Would that be constitutionally legal? There is no precedent, but these are times that require someone like Rivlin to do something courageous.

This may explain why the Likud-held Justice Ministry is hastening to open an investigation into alleged fraud on the part of a high-tech company, The Fifth Dimension, whose board chairman until a year ago was Blue-White leader Benny Gantz. The idea appears to be to create a kind of symmetry of criminal suspicions in the eyes of the voter. This, even though Gantz himself and the company’s former chief executive, Ram Ben-Barak, an ex-Mossad official now also on the Blue-White list, are not themselves targets for investigation, while Netanyahu’s indictment on three counts is well grounded.

The backdrop is obvious: Justice Minister Amir Ohana, a mediocre Likud back-bencher whom Netanyahu appointed as a reward for his loyalty, has appointed an interim chief prosecutor with doubtful credentials whose first act has been to investigate The Fifth Dimension. This is all part of Netanyahu’s ongoing assault on the gatekeepers of Israeli rule of law.

Q. Netanyahu challenged Gantz to a TV debate. Why did Gantz turn him down?

A. Gantz had been challenging Netanyahu to a debate until recently, with Netanyahu turning Gantz down. Now the situation is reversed. Netanyahu’s surprise challenge was issued the very day last week that his trial date was set for March 17. It appears that Netanyahu was concerned with electoral fallout over the trial date and finally decided he had nothing to lose by opting for a debate: the very fact of his initiative might distract voters’ attention from his judicial troubles.

Netanyahu has a mixed record in electoral debates. He was visibly uncomfortable back in 1999 when confronted with innuendos about lying about peace contacts with Syria (“look me in the eye, Bibi”) by a capable debater like Yitzhak Mordechai. (He lost that election to Ehud Barak, who boycotted the debate.) On the other hand, in rare interviews Gantz does not always appear fluent and relaxed, and in his effort to please both right-wing and centrist voters he waffles uncomfortably.

For example, Gantz declares that he will implement the Trump peace plan’s provision for Israel to annex the Jordan Valley, thereby appealing to right-wing voters. But he hedges by noting that this will be done only in coordination with the international community--which opposes Israeli annexation, meaning it won’t really happen under Gantz. The perplexed voter has to read between the lines. Gantz’s handlers know that Netanyahu will pounce on this contradiction in a debate.

Gantz might conceivably have lost a Knesset mandate over the debate imbroglio. But Netanyahu could yet lose one or two mandates over events in and around Gaza.

A. Netanyahu and his defense minister, Naftali Bennet, both blustering security hawks and rivals for the same right-wing votes, are going out of their way to try to placate Gaza-based Hamas with economic incentives to maintain peace and quiet on the Gaza Strip front at least until March 3. A flare-up in violence emanating from the Strip, particularly one producing Israeli casualties, could cost each, and both, votes.

Surely they have been made aware by IDF intelligence that the prolonged Gaza confrontation with Hamas is not an economic conflict. The militant Islamists in the Strip will not be swayed for long by monthly cash dollar payments from Qatar, by permits to transit Egypt, and by Israeli agreement to extend the Mediterranean coastal fishing limit to 15 km. from shore and allow a few thousand more Gazan laborers into Israel. If Gaza’s Hamas government is embarrassed to fire rockets at Israel’s Gaza periphery communities so soon after receiving these goodies, it simply allows the even more extreme Iran-linked Palestinian Islamic Jihad to do the dirty work.

Naftali Bennet is one of a series of right-wing defense ministers who took office vowing to destroy Hamas (Liberman is another). Are right-wing voters perturbed by the hypocritical specter of Bennet sending the IDF’s Southern Command head, Major General Herzi Halevi, along with Mossad head Yossi Cohen (who answers to PM Netanyahu) to Qatar to solicit more frequent and larger cash bribes for Hamas?

Probably not. Rockets continue to fall in the Gaza periphery, and residents to run for cover, as this is being written on Monday, February 24.

Q. What about West Bank Palestinians? Has dissatisfaction with Trump’s highly prejudicial ‘deal of the century’ generated any signs of a new intifada erupting?

A. Not so far. There has been a mild uptick in terrorist attacks in the West Bank and East Jerusalem, but nothing signaling an intifada. Palestinian leader Mahmoud Abbas’s angry declarations regarding an end to Palestinian Authority security cooperation with Israel have not been honored and the cooperation continues. A dispute over the movement of livestock and agricultural produce between the West Bank, Israel and Jordan has been resolved.

Looking specifically at PLO/PA leaders in the West Bank, it is reasonable to speculate that they are watching Israel’s elections closely. If Netanyahu wins and forms a right-religious coalition with at least 61 members of Knesset, the Palestinians can expect near-term territorial annexations in the West Bank. PLO leaders might conceivably opt to preempt by inciting an intifada. If Gantz ends up as prime minister, the Palestinians might see some sort of possibility of negotiations or quiet understandings that obviate both immediate implementation of the ‘deal of the century’ and any violent response on their part.

Q. Could Covid-19 (the corona virus) have an effect on these elections?

A. Covid-19 has definitely arrived in Israel from the far east. In a bizarre mimic of Gaza periphery residents spending frightening nights with their traumatized kids in shelters to protect against rockets from Gaza, several hundred Israelis are already confined to their homes or to a special hospital facility, quarantined against Covid-19. More and more Israelis are beginning to feel concern about standing in line to vote in restricted quarters on election day. Then too, election officials are worried about the deliberate dissemination of fake news in specific electoral districts, e.g., rumors of virus outbreaks in heavily secular-liberal areas like greater Tel Aviv (Gush Dan), aimed at suppressing voter turnout.

Q. Okay, but at the end of the day, assuming another draw between the two blocs, what has to happen in coalition talks to avoid a fourth round? Surely some politicians in a position of tie-breaker will consider compromising their views in order to bring glory upon themselves by enabling the emergence of a governing coalition. . .

A. Here are the possibilities, based purely on rumor, supposition and perhaps wishful thinking.

First, Avigdor Liberman, the right-wing secular head of Yisrael Beitenu who currently is predicted to get seven Knesset seats, stops holding out on both blocs and decides to join one or the other. To join Netanyahu and the right, Liberman would have to agree to share power with the Haredim (ultra-Orthodox). To join Gantz and the center, Liberman would have to undertake to be in a coalition that at the very least enjoys external support from the Joint Arab List with its anticipated 13 members of Knesset.

Liberman detests the Haredim on religious grounds and the Arabs on racist and political grounds. Yet he has declared that he will not allow a fourth round to happen. Is that another empty election promise, or does he have a plan?

Second, Yamina, Bennet’s right-religious party, and/or a Haredi party agrees to sacrifice its principles and join Gantz and Liberman, thereby obviating Blue-White’s need for Joint Arab List passive support. For this to happen, Gantz would have to move Blue-White further to the right, and Liberman might have to compromise on his secular principles.

In both these cases, Labor-Gesher-Meretz on the Zionist left, with eight to ten mandates, would also have to compromise: with Liberman, Bennet and/or the Haredim.

Third, Netanyahu steps down as Likud leader and Likud forms a coalition with Blue-White and possibly additional parties. This could conceivably happen following an initiative by President Rivlin (see above) or a plea bargain agreement by Netanyahu obviating a trial but forcing Netanyahu out of politics.

A. We’ll rejoin these possibilities, and perhaps explore new options, a day after the March 2 elections.