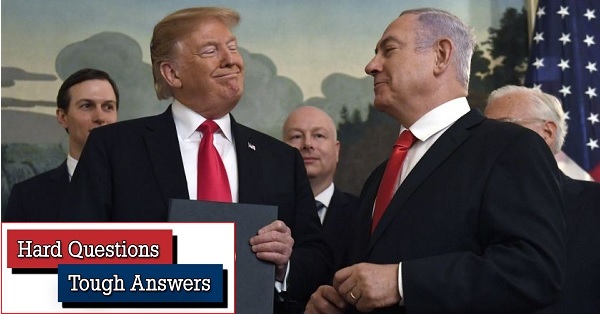 Q. Did PM Netanyahu really refuse entry to two anti-Israel Muslim-American congresswomen because of a demand from President Trump? Is Netanyahu prepared to worsen already damaged relations with Congress, the Democratic party and the American Jewish mainstream just to strengthen Trump’s US base?

A. This is the dominant theme in much of the criticism of Israel’s chaotic, on-again-off-again approach to the request by Congresswomen Rashida Tlaib and Ilhan Omar to visit the West Bank and the Haram al-Sharif (Temple Mount) mosques in Jerusalem. In view of the damage just inflicted by Netanyahu and the Israeli ultra-nationalist mainstream on Israel’s relations with both the Democratic party and the large majority of American Jews who support it, this is understandable. Put simply, the Netanyahu-Trump collaboration is bad news for the future of US-Israel relations.

But to comprehend Netanyahu’s behavior we must also look internally--at the Israeli electoral scene and the prime minister’s fear of indictment and eventual criminal prosecution, conviction and jail. Here the signs of panic are palpable; his handling of the Tlaib-Omar affair is just one of them.

According to this alternative analysis, Netanyahu initially approved the Tlaib-Omar visit precisely in order to demonstrate that Israel is strong enough to absorb the sort of provocation they inevitably would provoke here, and to present the US Congress with a bipartisan approach. That is what Israel’s ambassador in Washington, Ron Dermer, recommended.

But as the visit neared, Netanyahu was increasingly spooked by indications that he was losing support among the Israeli political right. Alone of all the parties, Avigdor Liberman’s polling numbers were climbing (lately, as high as 12 mandates, up from 5). Liberman is promising voters a right-center coalition composed of his Yisrael Beitenu party, Blue-White and Likud, but led not by Netanyahu. Liberman, the only party leader emphasizing his secularism, abhors the ultra-Orthodox whom Netanyahu insists on partnering with. Liberman proposes that the coalition embracing Likud, Yisrael Beitunu and Blue-White be led by (“for example”) Knesset Speaker Yuli Edelstein, a potential consensus candidate, a relatively independent Likudnik and like Liberman a Russian-speaker of Soviet-era origins.

Further, to Netanyahu’s dismay last week, most of the far (and mostly Orthodox) right was coalescing into “Yamina” (“Turn Right”) under Ayelet Shaked and was polling over 10 mandates. That means Shaked, like Liberman, is successfully poaching votes from the Likud. And since Liberman refuses to join a coalition led by Netanyahu, the meaning of these polling figures is that Netanyahu will not have a coalition that he can depend on to grant him immunity from prosecution.

Q. So you have an explanation for the Tlaib-Omar fiasco that begins with Netanyahu, not Trump?

A. Netanyahu’s reaction to Liberman’s mention of an Edelstein-led coalition was pure panic. He instructed a close supporter, MK David Bitan (who like Netanyahu is likely to be indicted and in need of immunity from the next Knesset) to recruit the first 40 candidates on the Likud Knesset list to sign a pledge to support only Netanyahu for prime minister. Of course they all signed Bitan’s WhatsApp petition. They know that this, like most pre-election promises, will become meaningless on September 18, the day after elections.

Then Netanyahu’s panic moved to the question how his critics from within his own right-wing bloc and potentially within his own party would react to the provocations to be expected during the Tlaib-Omar visit. After all, both could be expected to condemn Israel in every imaginable way; neither is above making political remarks with anti-Semitic overtones. And they were planning to visit the Temple Mount, potentially provoking open confrontation with the Israel Police. Netanyahu would be pilloried by his own right-wing for allowing this to happen. The Palestinian issue appears urgent to only 15 percent of the Israeli Jewish electorate according to a recent poll by the Israel Democracy Institute; why let Tlaib and Omar inject it into the campaign?

Netanyahu and Trump consult frequently by phone. They are reported to have spoken only hours before Trump tweeted that "It would show great weakness if Israel allowed Rep. Omar and Rep. Tlaib to visit. They hate Israel & all Jewish people.” Whether Trump’s admonition was directly solicited or not, Netanyahu happily got the message and changed the narrative.

The congresswomen, who had provocatively declared they were coming (only) “to Palestine” and would not meet with Israeli officials, were told they would not be allowed entry to Israel (meaning they could not reach the landlocked Palestinian Authority in the West Bank). Dermer was apparently instructed to acknowledge that he had told them they could come without consulting his boss, Netanyahu--a highly non-credible new spin. Tlaib’s request for a humanitarian visit to her grandmother was accepted, but with conditions attached and made public regarding a pledge by her not to talk politics while in the West Bank. Her consequent flip-flop refusal was not unwelcome.

Q. Yet surely Netanyahu was happy to help Trump portray the Democrats and the American Jewish mainstream as caving to the Tlaib-Omar variety of pro-BDS, anti-Israel propaganda.

A. I would go a step further. Netanyahu presumably believes that, if he remains prime minister and the Democrats win in 2020, he’ll quickly succeed in patching up relations with them. AIPAC, the AJC and other center-right US Jewish advocacy organizations that have criticized Netanyahu’s behavior toward Congress and the Democratic party over the Tlaib-Omar affair will, he probably reasons, quickly put this affair behind them and continue to support him.

Conveniently, Netanyahu will ignore the possible long-term ramifications of a sharp drop in support for Israel by Democratic Jewish voters. These attitudes reflect a palpable degree of disdain for mainstream American Jewish institutions in some prominent Israeli circles--mainly but not only Orthodox and ultra-Orthodox.

But of course the idea of a Democratic victory and a post-Trump era is speculative and of secondary importance. Netanyahu’s behavior is governed for the moment by his panic over possibly losing his job and his freedom within months. His ultra-nationalist, increasingly messianic base (Likud Minister of Culture Miri Regev last Saturday, responding to Liberman: “not the people, but the holy one blessed be he will decide the next prime minister”) is far more important than those actors on the American scene who don’t vote in Israel. Besides, unlike Trump, his Orthodox real estate peace team and the Evangelicals, the Democrats don’t support Netanyahu anyway.

True, this narrative portrays Netanyahu as not only an Israeli ultra-nationalist who caters to the Orthodox and ultra-Orthodox in Israel. He is also a died-in-the wool Trump Republican who has neither faith nor interest in liberal America in general and liberal American Jewry in particular. And finally, he believes that ultimately the American Jewish mainstream’s representative institutions will prove as gullible as has the Israeli Jewish mainstream over the past decade.

Q. What else threatens Netanyahu’s electoral chances, and what is he doing on other fronts to recruit voters who have drifted away to Liberman, Shaked, Gantz (Blue-White), Amir Peretz (Labor-Gesher) and even Ehud Barak (Democratic Union/Meretz)?

A. In the course of the month remaining prior to elections, and as the campaign heats up once Israelis return from vacation, Netanyahu is planning to burnish his “global leadership” image with the general electorate with visits to Ukraine (arrived on Sunday this week), Ethiopia and India. There is talk of a brief stopover in a Gulf emirate. He is reaching out to the more extreme settlers with Cabinet approval of over 1600 new housing units deep in West Bank territory beyond the settlement blocs and the security fence. A stalwart supporter, Likud Minister of Public Security Gilad Erdan, has called for changing the status quo on the Temple Mount to allow Jews to pray there.

This is the non-panicky Netanyahu at work: a skilled politician exploiting his prime ministerial authority in a manner that the opposition on the right and the left cannot duplicate.

But by the same prime ministerial token, one factor that could worsen Netanyahu’s chances is the security situation. The past week has witnessed too many lone-wolf attacks for comfort on the Temple Mount and in the West Bank. In Gaza, too, seemingly “independent” Hamas units have attacked Israel. An (alleged) Israel Air Force attack against pro-Iranian targets deep in Iraqi territory could go awry.

Here and there among security experts, Israel’s relative complacency about security vis-à-vis Gaza and Iran/Hezbollah is being compared to the situation that led up to the 1973 Yom Kippur War. If the security situation gets out of hand, only Netanyahu will be blamed, particularly insofar as he is consciously looking for ways to exonerate Hamas and has recently augmented Israeli economic benefits for Gazans in order to avoid a major conflagration on election eve. In contrast, Blue-White with its three former IDF chiefs-of-staff led by Gantz who is currently sounding the alarm regarding Gaza, could benefit.

Q. Meanwhile, if Liberman alone is gaining votes, who is losing them?

A. Both Likud and Blue-White have dropped from 34-35 mandates in the April 9 election to around 30. A couple of mandates of Arab voters appear to be considering Labor-Gesher with its strong socio-economic message or Meretz-Democratic Union, the only party actively boosting the two-state solution, or even Blue-White.

Q. As matters stand and assuming current polling results don’t change, what kind of coalition can emerge from the Sept. 17 elections?

A. If elections were held now, we might well end up again with a parliamentary standoff. Netanyahu could not form a right-religious coalition because that bloc would lack two or three mandates to get to 61. He could try to tempt Labor/Gesher’s Amir Peretz and Orly Levy-Abakasis to join him. He might try to poach a few MKs from Blue-White. His chances of success here are probably less than 50-50.

Blue-White, partnering with Labor and Meretz but not the United Arab list, would lack far more mandates than Likud for a coalition. And Blue-White has resolved not to join a coalition headed by Netanyahu. Liberman says he will propose a broad center-right coalition with both Blue-White and Likud, but only on condition that the Likud (and the coalition) not be led by Netanyahu.

Under these stalemate circumstances, and considering that a third round of elections appears to be unacceptable to both the public and the politicians, perhaps a few politicians will jump ship and, if the reward is sufficiently tempting, betray their electoral mandate (surprise, surprise). Alternatively, the situation will require creative initiatives, presumably by President Rivlin but conceivably by a relatively independent Likudnik like Edelstein or Gideon Sa’ar.

A. Beyond the ugly nitty-gritty of this election, one big question emerges regarding Netanyahu’s panicky behavior. There is a huge difference between the empty act of demanding loyalty pledges from his Likud list and the cynical disdain he just displayed for the Israeli-American “special relationship” with its underpinnings in American values and the American Jewish community. Here we must recall that Netanyahu’s contempt for the Democratic party and American Jewry did not begin with the Tlaib-Omar affair or even with his 2015 provocative appearance before a Republican-dominated Congress to denounce Obama’s Iran nuclear deal.

Assuming he remains prime minister--clearly still a possibility--can he get away with this? Or is he, willfully and consciously, inflicting heavy long-term damage to Israel’s only real strategic alliance: with the American Jewish community and the US system and values it represents?