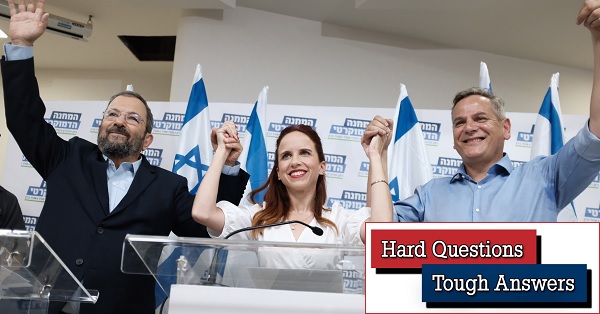 Q. Registration of party lists for the September 17 elections closes on August 1. As of Monday, July 29, where do we stand?

A. Efforts on both the political left and the political right to consolidate and unite party lists have succeeded sufficiently to take potential votes away from both Likud and Blue-White. Together with the ongoing attractiveness for secular right-wingers of Liberman’s Yisrael Beitenu (9 or 10 mandates according to the polls, doubling its current strength), this points to three likely outcomes (assuming today’s projections are still accurate on election day).

First, Blue-White and Likud together garner slightly less than a 61-mandate majority and cannot on their own form a center-right coalition--even assuming they would wish to. This is a dramatic downturn for both compared to the outcome of the previous election, which ended in stalemate.

Second, not counting Yisrael Beitenu, neither the right-religious bloc nor the left-center bloc has a blocking majority or for that matter a coalition majority.

Accordingly, and third, Yisrael Beitenu could emerge from these elections in the role of kingmaker. This is precisely where its leader Avigdor Liberman wants to be.

Q. But combined lists are merging on both the left and the right. . .

A. Yes, and this conceivably will give them greater bargaining power in coalition negotiations. This phenomenon also spotlights two or three politicians whose skills and charisma appear to give them growing power and influence.

Q. You mean Ayelet Shaked on the right?

A. First and foremost. Here we have an attractive young secular woman who has managed to maneuver herself to become number one on a combined list on the right: her own New Right together with two parties to its right, Jewish Home and the National Union. She is apparently the only non-religious person on this combined list, which features and is supported by rabbis and other ultra-religious activists whose Judaism denigrates women to a subordinate role in all aspects of life save childbearing.

Shaked keeps her sleeves long and her dresses modest. But she poses in designer clothes for women’s magazines, flaunts her sexily-coifed black hair, and makes no secret of her secularism. Why is she heading the new combined list? Because the ultra-nationalist religious right has convinced itself that she can expand its voter potential, thereby rendering it a mandatory coalition partner for the Likud--which is where Shaked herself would really like to be if only Sarah Netanyahu did not openly loath her.

Note, by the way, that the new far right list does not include the Kahanist Jewish Power party or the pro-Cannabis, “let’s take over the Temple Mount” Zehut party. Unless that changes by August 1, the far right still is likely to lose votes to the four-mandate threshold.

Q. Will the left also lose votes to the threshold?

A. Probably not. Here we can thank another emerging star, Meretz’s Arab Member of Knesset Issawi Frej. It was Frej who managed the negotiations that brought Ehud Barak with his fledgling Democratic Party and Labor’s Stav Shafir into Meretz. This effort included a groundbreaking public apology by Barak to the Israeli Arab community for the deaths of 12 Arab citizens (and one West Bank Palestinian) during riots back in 2000 when Barak was prime minister. Meretz’s expansion was paralleled only slightly to its right by Labor, where Amir Peretz engineered a merger with Orly Levi Abakasis and her Gesher party.

Frej’s effort, by the way, does not move him up on the Meretz list. On the contrary, he has stepped aside to allow Shafir, who like Ayelet Shaked has female star appeal, to be high on the Meretz list. Barak, in turn, has wisely relegated himself to number ten on the new list to underline his newfound humility in light of his problematic business dealings with convicted sex offender Jeffrey Epstein.

Incidentally, an effort by Frej to bring one or more Arab parties into the merger was less successful due to Arab opposition, but important as a precedent.

It looks like both Meretz and Labor now have enough distinctive appeal to split a voter base of over 15 potential mandates. Labor, with Levi Abakasis and Peretz’s background as a labor leader, intends to win over “lite” right wing voters who support its emphasis on social and economic issues and its unstated willingness to ignore the “conflict” (Palestinian) issue. Meretz will apparently remain the only Zionist party openly campaigning for a two-state solution, along with emphasis on civil rights issues involving Arab citizens of Israel.

The latter, incidently, have reunited. All four Israeli Arab parties are now again running together, thereby avoiding the loss of nearly two mandates they suffered in the last, abortive election when they ran with two separate lists. On the other hand, by including in their united list the Balad party with its radical anti-Israel platform, the reunited Arab list has (as Frej himself discovered) seemingly eliminated even a slim chance that it could be included in a passive support role as part of a left-center coalition.

Q. That means that Blue-White will not be able to form a coalition without elements from the right: Likud, Liberman and or Shaked. But by the same token the Likud, even with Shaked’s far-right party, will need Blue-White, Liberman and/or Labor. And because these are problematic matches, are we again looking at a post-election coalition stalemate?

A. As matters stand, yes. Yet no one dares even suggest a third round of elections. It is clear across the political spectrum that another stalemate would so demoralize the public that it could decimate Israeli politics and political institutions.

Further, these scenarios are derived from what might be a temporary bump in the popularity of the parties on the right and left as a consequence of the dramatic developments there in recent days. Essentially, neither Likud nor Blue-White has begun to campaign. Since August (heat, vacations) is a “dead” month, it is entirely possible that the decisive campaign dynamic will not emerge until the first two weeks of September.

Then, both Likud and Blue-White will make strenuous efforts to poach votes from their smaller rivals, all of whom are vulnerable. In particular, Prime Minister Netanyahu can exploit the advantages of his office to try to score points with voters.

A. Despite Israel’s huge income gaps and pockets of real poverty, there is enough prosperity that it is hard to attack Netanyahu on the economy. And the prime minister has been successful in distracting the public from his policies on the Palestinian issue, where Israelis are seemingly being led like sheep into a disastrous apartheid reality. Still, Netanyahu needs more votes if he is to emerge the undisputed leader. Accordingly, it looks like he is readying a series of international meetings and agreements designed to spotlight his global standing among fellow ultra-nationalist leaders. He has done this in the past, e.g. meeting Trump, Putin and Xi as elections approach.

Thus, visits to India and the Ukraine appear to be in the works for late August or early September. More intriguing--and potentially appealing to voters--are the rumors about the possibility of Netanyahu and Trump signing some sort of mutual defense agreement focusing on the Iran threat.

Q. That idea has been bandied about for decades. Would President Trump be willing? Would this play to Israel’s ultimate advantage from a security standpoint?

A. A few days ago, Israel and the US successfully tested Israel’s Arrow 3 missile defense system against attacking missiles in the stratosphere high above Alaska. That makes Netanyahu look good, and he hastened to take credit by Twitter and Instagram. But would he move from this sort of very productive cooperation to something more formal?

As for Netanyahu, while much of his public worships Trump, the Israeli security community will almost certainly line up against the idea for the same reason it has been deterred over the decades from even seeking NATO membership (not that it was offered). Would Israel be willing, under a mutual defense pact, to overtly reveal its nuclear capabilities? Would Israel, which is already under US pressure to reduce its strategic cooperation with China (e.g., in building port facilities and infrastructure projects like the Tel Aviv light rail), yield to an American demand to cut these ties entirely and break ongoing contracts?

And most significantly, would Israel agree to coordinate all its active defense preparations, which under its security doctrine include taking the fight to enemy territory, and subject them to Washington’s veto?

A. Fifty days before Israelis go to the polls again, the electoral line-up is emerging. Mergers on the left and right mean that fewer votes will be “lost” this time around to the four-mandate threshold. Still, the real campaigning is likely to wait until late August-early September.

On the far right, the secular Ayalet Shaked’s emergence as leader of a united ultra-nationalist-religious list is fascinating. And it could prove problematic. Shaked’s almost exclusively male nationalist-messianic partners simply do not know how to keep their mouths shut when it comes to gender issues, religious law and religion and state. And they seek first and foremost to impose their fundamentalist brand of religiosity on secular Israelis like Shaked herself.

While mergers on the left and right have distracted attention, Avigdor Liberman is still the man to watch. And issues of religion and state are still a major preoccupation of the electorate.

At the political helm, Netanyahu has to worry about both indictments and the danger that Hamas or Iran will initiate violence along the borders or with missile strikes to embarrass him. As for a possible security pact of some sort with Trump, if it happens it will be more virtual and bombastic than real--like nearly everything Netanyahu and Trump do.