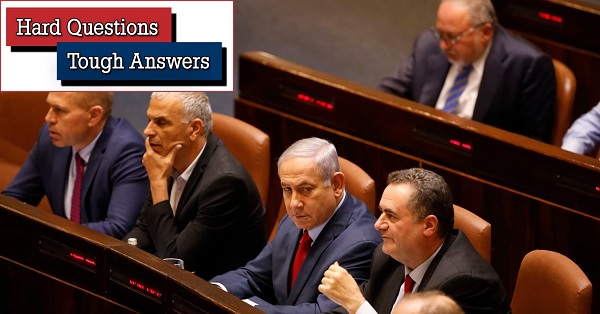 Q. Israel is back in election mode, barely two months after the previous elections. How would you characterize this new round at this early stage: has anything changed?

A. Here are two seemingly contradictory statements from Sunday’s Israeli press that say a lot about the mood. Liberal publicist Yaron London wrote in Yediot Aharonot that among today’s political mainstream, “nationalist”, “religious” and “right-wing” are now synonymous. In sharp contrast, arch-secularist Avigdor Lieberman announced that his party’s mission in these elections is to “compel formation of a liberal national unity government” based on the Likud, Blue-White and of course his own Yisrael Beitenu party, but without the Haredim (ultra-Orthodox) and the far right.

Leaving aside for the moment the political left and the Arab parties, these two declarations frame the current narrative. It’s about defining the political right, with and without religion.

A. The blue-white leadership is doing this. Party leader Beni Gantz is dialoguing with the Haredim, who scored a record 16 mandates last election, to convince them to at least consider, next time around, a coalition with Blue-White. To that end the Blue-White party is trying to either hide Yair Lapid or portray him as ultimately friendly toward the role of religion in politics.

Lapid, we recall, entered Blue-White with his Yesh Atid party on condition that the premiership be rotated between Gantz and himself. Yesh Atid built its political image several elections ago by harshly confronting the Haredim as draft-dodgers and parasites. If Blue-White renounces its rotation pledge, the party will fragment overnight and its aspiration to win more mandates than the Likud will be dashed. By the by, not a few observers had predicted that if Blue-White lost in April it would in any case fragment into its three component parties (led by Gantz, Lapid and Yaalon). That that has not happened so far and that Blue-White has not collapsed in the polls as a kind of “one-shot wonder” is in itself an achievement.

Further, Blue-White’s analysis of the last election results has apparently added fuel to its drive to move in terms of election slogans more to the right.

Last time around, Blue-White with its liberal, anti-Netanyahu platform took votes away from Labor and Meretz. But this tactic shrunk the vote for these two left-wing Zionist parties (Meretz barely made the four-mandate threshold) and did nothing to enlarge the anti-Netanyahu bloc, which ended up with 55 mandates. Better, then, to abandon the left to Meretz and Labor, which will probably merge and will in any case join a Blue-White-led coalition, and to try to poach more “soft” Likud voters who are tired of Netanyahu’s desperate attempts to manipulate the system in order to avoid prosecution on multiple corruption charges.

Q. How is Netanyahu manipulating the system?

A. Both this election and the previous one, in April, were initiated by Netanyahu in an attempt (which failed) to preempt prosecution procedures by the attorney general and, most recently, to avoid formation of a government by someone else selected by President Rivlin, a move that could have left Netanyahu out in the judicial cold.

Now Netanyahu has selected as minister of justice, at least for the interim period until a new government is formed in the autumn after September 17 elections, a very junior Likud member of Knesset, Amir Ohana, whose main virtue is that he is a huge booster of the prime minister, who in his eyes can do no wrong. Ohana also happens to be Israel’s first openly gay minister, a move that paints Netanyahu as liberal. But Ohana himself is so far to the right that his first public act as minister of justice was to assert that High Court of Justice rulings do not always have to be obeyed.

Netanyahu can depend on Ohana to do everything in his power, and then some, to slow down progress toward indicting the prime minister.

Q. Returning to the left, whose electoral performance last round was poor, what changes are contemplated?

A. Labor and Meretz are the only parties that are holding new leadership elections. Labor leader Avi Gabai resigned after his leadership produced the poorest electoral result in Labor’s history. Several veteran MKs (Amir Peretz, Stav Shafir, Itzik Shmuli) are presenting their candidacy and one or two retired generals are considering joining the fray.

This, even as another general, Tal Rousso, who was recruited for the April election by Gabai as his number two, has announced that he is leaving Labor and politics in general after barely one month in the twenty-first Knesset. That constitutes a record for something: shortest political career, fastest disillusionment with politics, smartest ex-general?

In Meretz, which barely survived the last elections, Tamar Zandberg’s leadership is also being challenged, thus far by former MK Nitzan Horowitz and, uniquely, by an Arab-Jewish duo: MK Esawi Freige and former MK Mossi Raz (more on this below).

Both Labor and Meretz are also talking seriously about combining forces and running a single, left-Zionist list to avoid the threshold pitfall. The two Arab lists from the April elections are also talking about recombining into a single list that embraces all four Arab parties. This, after analysis of the April outcome appears to indicate that fragmenting into two lists led to a net loss of Arab votes. Here, again, even Blue-White has an interest, insofar as an enhanced Arab political presence in the next Knesset will further enlarge the anti-Netanyahu bloc and move it closer to a 61 MK blocking majority.

Q. Moving to the far right, where six or seven mandates were lost in April due to squabbling among no fewer than five parties, is there progress toward political unity?

A. Not so far. New Right heads Naftali Bennet and Ayelet Shaked, whose party was eliminated by the four-mandate threshold in April, are still casting about for a political base. Neither wants to return to their original base, the Jewish Home party, which has seemingly moved too far to the religious-right for their taste. Interestingly, while in right-wing circles, including both the Likud and the religious right, Bennet is viewed as an electoral liability, the ostensibly secular but solidly right-wing Shaked is being courted as an asset.

Q. Where are the wild cards?

A. Two whom we mentioned two weeks ago when we first discussed this second round of elections, are Ehud Barak and Tzipi Livni. The latter has remained out of the spotlight, her intentions unknown and her attractiveness as a candidate generally downgraded by Labor and Blue-White, with either of which her views are roughly compatible.

As for Barak, he is variously discussed as either a new-old leader for Labor (he is Gabai’s candidate, but Gabai has been discredited), or as leader of a new vanguard party that would aspire on September 18, even with just a handful of mandates, to lead a new coalition embracing everyone from Blue-White and the Haredim leftward through Meretz. Having sat out politics for a few years, grown a beard and made money selling medical cannabis, Barak is attractive in some circles. Others recall that he left politics in defeat and was less than a star as prime minister in the late ‘90s.

One unprecedented wild-card bears mention. According to Israeli Arab politicians, Mahmoud Abbas’s Palestinian Authority is encouraging formation of a new Jewish-Arab party, or alternatively considering supporting a Jewish-Arab leadership and party list for Meretz (see above, the Raz-Freige initiative). Presumably such a political innovation would take votes away from the traditional Arab parties. This provides yet another reason why the two current Arab lists in the short-lived twenty-first Knesset are trying to reunite, and quickly, for elections to the twenty-second Knesset.

You thought US President Trump might actively seek to boost Netanyahu in these elections? You can apparently add Abbas to the list of external manipulators. And you may have to add Hamas, if towards September it becomes disgruntled enough to start a serious fight with Israel in order to discredit Netanyahu.

Q. We know that Hamas is skilled at blackmailing Netanyahu: Israeli material concessions in return for Gazan peace and quiet. Where do we stand with Netanyahu’s legal issues?

A. Netanyahu has agreed to participate in the hearing offered him by the attorney general just two weeks after elections, on October 2-3. But he threatens to appeal to the High Court in the weeks ahead to postpone the hearing. Meanwhile he keeps switching lawyers--not a good sign from his standpoint. And his wife, Sarah, is about to plead guilty in a plea-bargain deal over her abuse for personal use of funds allotted to the PM’s residence, even as separate legal proceedings continue over charges that she abused “the help” and not just money at the residence. None of this is good for the Netanyahu “political magician” image, especially among his slightly less fanatic followers.

Q. Rounding this all up, is there a bottom line?

A. The parties of the political left appear to have a better chance of reducing their number through unification, thereby improving their election score, than do the parties of the right. That’s good news for Blue-White. In parallel, Liberman’s political leap forward as flagbearer of secular Israelis could enable him to poach votes from the left, from Blue-White and even from the Likud. Liberman could also wither in the polls once the initial excitement over his rebranding (from “Russian” to “secular right”) dies down.

Accordingly, as for the notion of a serious secular backlash against the growing role of orthodox religiosity in Israeli politics (and life!)--it’s too early to say. One way or another, religion will play an outsized role in these elections. Conceivably, corruption too will play a stronger role, but only if a few more prominent Likudniks bolt ranks, and not necessarily to Blue-White.

If I had to predict today, I would say that September’s election offers a slightly improved likelihood of producing a left-center-Arab blocking coalition of 61.

But of course this is June, not September.