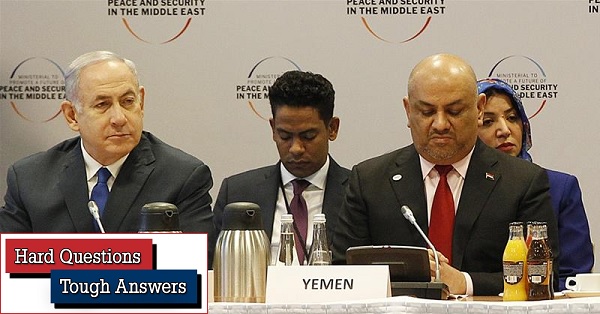 Q. Now that party mergers and election lists have been finalized and the clock is really ticking on Israel’s April 9 elections, do you have any sense of the final outcome?

A. No. What might have looked six months ago like a shoo-in for the Likud and PM Netanyahu is now truly uncertain. We can cite a variety of reasons for this phenomenon. And we can build at least three equally probable scenarios for both the final vote outcome of April 10 and the coalition that is ultimately formed sometime in the months that follow.

Q. Let’s start with the factors informing your uncertainty. Are the mergers one of those factors?

A. Absolutely. At the center, the merger that created the new Blue-White list, combining Benny Gantz’s Israel Resilience and Yair Lapid’s Yesh Atid, generated, overnight (and, of course, according to overnight polls with an ample margin of error) the largest future Knesset faction, with around 35-36 mandates compared to 30-31 for Likud. Being the largest party in the newly-elected Knesset is a distinct advantage in asking President Rivlin for first crack at forming a government.

But Blue-White will also need to represent the largest bloc, or at least a “blocking majority” of 61 out of 120 MKs that can deny a majority to Netanyahu. True, as a centrist party it can potentially attract allies from both the left (Labor, Meretz, two Arab lists) and the relatively moderate right (Kahlon’s Kulanu, Liberman’s Yisrael Beteinu, Orly Levy-Abakasis’s Gesher). But this is where two additional mergers enter the picture: one that happened, and one that did not.

The one that happened, thanks to huge pressure and inducements from Netanyahu himself, groups two extreme right-wing lists, Jewish Home and National Union, with a third, totally racist and openly Kahanist list, Otzma Yehudit (Jewish Power). The latter has hitherto existed on the shadowy margins of Israeli politics (and the law) because of its out-and-out racism and because it could not on its own muster the four mandates necessary to pass the Knesset threshold. Its members are extremist hate-mongers who literally worship at the tomb of Baruch Goldstein, the fanatic who perpetrated the 1994 Hebron Cave of the Patriarchs massacre that launched Palestinian suicide bombings.

To persuade all three parties to unite, thereby avoiding any loss of votes on the extreme right, Netanyahu took three unprecedented steps. First, he postponed a Moscow summit with Vladimir Putin--a long-awaited meeting after five months and a vital one for Israel’s security interests to its north--in order to deal with non-Likud party politics. Second, he promised the united extreme-right list two government portfolios, including the Department of Education with its far-reaching influence over the values of Israeli youth. And third, he awarded the united list a slot on the Likud list as well, meaning an additional guaranteed member of Knesset.

So cynical and depraved were these moves that even AIPAC with its yes-man mentality regarding Netanyahu’s policies took its distance--albeit mildly, without canceling the prime minister’s invitation to speak at its March annual convention. But here Netanyahu’s bigger gamble is that self-respecting right-wingers who still take their values from Jabotinsky will now abandon the Likud and vote Blue-White.

Then there is the merger that failed: Labor rejected an offer from Meretz to merge their lists on the grounds that this would not add votes to the Zionist left. That may be true on paper, but in reality if Meretz falls below the four-mandate threshold because its voters prefer Blue-White, then votes will be lost to the center-left bloc that Gantz and Lapid need to prevent a Likud-led majority.

There are additional minor lists that could disappear along with their votes due to the threshold. So powerful is the pull of Likud and Blue-White this time around that Avigdor Lieberman, Moshe Kachlon and/or Orly Levy-Abakasis, all former Likudniks and the first two former senior ministers, could end up wasting right-center votes. Notably, all three are potential partners in either a Likud or a Blue-White coalition.

Sima Kadmon of Yediot Aharonot summed up the challenges here neatly: “The elections will clearly be decided along two parameters: the mandate gap between Likud and the Gantz-Lapid party, and the size of the blocs. The latter will be determined based on how many votes each bloc loses to the mandate threshold.”

Q. Before we get to your scenarios, what other difficult-to-predict external factors could affect these elections prior to April 9?

A. First and foremost, a move in the days ahead to indict Netanyahu on one or more of three corruption cases pending against him. Leaving aside the prime minister’s anticipated attempts to avoid prosecution by blaming the legal and media establishments and the political opposition and labeling them all (God forbid!) “left-wing”, the most critical factor here is the question: how many votes will this actually cost Netanyahu? A lot could depend on the number and content of the indictments as understood by traditional Likud voters, i.e., given the sense that all politics are somehow corrupt, exactly how corrupt is this prime minister, and at whose expense?

Second, there is the Palestinian factor. Note in this context that these elections are currently not about the Palestinian issue, which Netanyahu and Arab revolutions have pushed to the back burner of Israeli politics. That’s why Netanyahu is punishing the moderate Palestinian Authority by denying it vital tax-transfer funds on the grounds that the money is used to reward terrorists sitting in Israeli prisons. The timing of this move is clearly designed to recruit voters by portraying the prime minister as “tough on terrorists”.

But the results could be troublesome. Palestinian leader Mahmoud Abbas is responding by denying funds to the Gaza Strip, cutting salaries in the West Bank and withholding funds from the prisoners. This could soon provoke dangerous unrest and violence directed at Israel on any or all of these fronts. There is also a potentially explosive confrontation brewing between the Netanyahu government and the Jordanian Waqf (Islamic Trust) on the Temple Mount. Palestinian violence could prove costly electorally for Netanyahu.

What’s more, there are some indications that the Trump administration plans to present its “ultimate deal” on the Palestinian issue and move it to the front burner immediately after Israel’s elections and before the winner has formed a coalition, precisely in order to influence the composition of that coalition. To the extent these reports are credible in the eyes of voters, they could also influence the vote. Elect a tough leader, Netanyahu, to face down Trump? Or elect centrists more capable of accommodating Trump’s demands upon Israel?

The US-sponsored deal is expected to be heavy on economic aid to the Palestinians and to demand of them far-reaching core concessions, for example on the refugee right-of-return issue. But it will also call for Israeli concessions: didn’t Trump say so when he rewarded Netanyahu by preemptively moving the US embassy to Jerusalem? In considering the response by Israel’s next government, we must bear in mind that the reply to Trump’s anticipated initiative from the PLO--hobbled by the Gaza-West Bank split, Abbas’s fading leadership and his rejection thus far of all Trump initiatives--is almost certain to be negative.

A. Precisely. It is indeed speculation. But it is intriguing and informative to speculate about this, particularly in view of the current state of the polls, which predict a virtual draw between the center-left and the right-wing blocs.

If the number of newly-elected MKs on the right, including the Kahanists, who recommend to President Rivlin to charge Netanyahu with forming a government is equal to those, including about a dozen Arab party MKs, who recommend Gantz, then one outcome could be a Netanyahu-Gantz coalition, conceivably without satellite parties and with possible rotation of the premiership. This would not be without precedent: we witnessed it back in the1980s with Peres and Shamir.

Would Gantz and his partners agree, for lack of a viable alternative, to a coalition with an indicted Netanyahu?

Q. That is one post-election scenario. What about a Netanyahu-right-led coalition? Or a Gantz-left-center coalition?

A. Sadly, in terms of pragmatic politics the former seems more likely than the latter. If he has a blocking majority, Netanyahu could probably succeed in forming a coalition that includes the Kahanist right without provoking a revolt among ostensibly more moderate Likudniks or, say, Kahlon or Levy-Abakasis, or the ultra-Orthodox. None of them would be ashamed enough to refuse portfolios and their accompanying benefits and budgets. Further, once holding such an option, Netanyahu might be able to persuade Gantz to join as a junior partner in a Netanyahu-led coalition as long as Blue-White gets key portfolios and the Kahanists are left out. Israelis are familiar with this variety of “bait and switch” from previous elections.

As for Gantz winning a blocking majority, his key dilemma would be that the composition of that blocking majority is not the same as any conceivable composition of his coalition. The former could include the dozen or so mandates of members of Arab parties. They, together with Labor, Meretz and Blue-White, could indeed garner 61 mandates and stop the Likud, obliging President Rivlin to designate Gantz to try to form a coalition. Right now, according to the polls, this is a very likely scenario.

Q. But what happens then?

A. If Gantz succeeds in corralling enough ultra-Orthodox and relatively moderate right-wing mandates (Kahlon, Liberman, Levi-Abakasis?) to create a majority of at least 61 without the Arab party votes, he is home free. This would mean compromising on key principles by everyone, including on issues of religion and state, but it has happened before. Still, this would require Blue-White to beat Likud by a sizeable plurality--“the people’s choice”--the vote presumably heavily influenced by the indictment and other issues noted above.

Failing that, Blue-White could conceivably bring at least one Arab party into the coalition. But that has never happened in Israeli politics and it is inconceivable today in view of the anti-Zionist platforms of the Arab parties and the heavy veneer of ultra-nationalism that virtually all Zionist parties feel obliged to commit to in the current reality.

Thus Gantz’s final option, having generated a blocking majority but failed to recruit a coalition majority, could be to rely on one or more Arab parties not in the coalition to support a ruling minority coalition of Zionist parties. This has happened before, albeit on single issues, for example when PM Rabin required limited Arab support to avoid parliamentary defeat over Oslo-related issues.

Here Gantz, like Rabin in his day, would face fierce criticism from the right (“you’re relying on terrorists!”). He might also face threats of desertion from his own Blue-White coalition, which will comprise many MKs who hail from the political right. Accordingly his best bet would be quickly to register legislative or peace-related achievements that are popular with the electorate and that either attract hesitant rightists like, say, Kachlon, to join the coalition and give it a Jewish majority, or that give Blue-White a boost in quick new elections.

Q. Finally, if Netanyahu and the right win but, within a year or so, Netanyahu is obliged to resign in order actually to face trial on corruption charges?

A. With enough loyal right-wing MKs who lack any vestige of integrity, a victorious Netanyahu may be planning to ram through legislation awarding the prime minister immunity from prosecution as long as he serves (the so-called “French option”). But assuming that does not happen, then at this point all bets are off.

Here, according to yet another scenario, even if Blue-White loses on April 9 by a narrow majority, this-- Israeli politics without Netanyahu--is the “Plan B” it might be counting on at some point in 2020.