Hard Questions, Tough Answers with Yossi Alpher (March 23, 2020) - Israel in the Time of Corona, Part 2: Threat to Democracy and Rule of Law 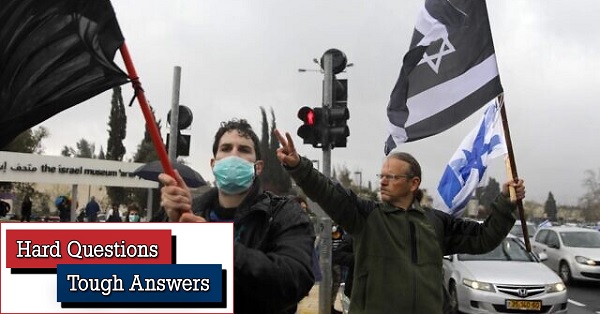 Q. After more than a year, Israel still has an interim government and no approved budget. Now it also has a corona crisis to manage. Knesset Speaker Yuli Edelstein, who has delayed convening the Knesset, says the current choices are between a unity coalition and anarchy. Why anarchy?

A. Edelstein, in coordination with PM Netanyahu, is trying to maintain Likud rule at any cost. Apparently in Edelstein’s view, shared widely on the right, a coalition formed by Blue-White’s Benny Gantz that relies on the 15 mandates of the Joint Arab List is the equivalent of anarchy. In other words, Arab votes and Arab members of Knesset are illegitimate.

Prime Minister Netanyahu has a slightly more nuanced touch: it is only because some of those 15 Arab MKs speak positively of terrorists, he says, that all are disqualified. This, spoken by a prime minister who is allied with extreme racist and messianic Jews, two of whom are Israel’s interim health and education ministers. Health Minister Yaakov Litzman, who by the way is under police investigation for obstruction of justice, last week informed Israelis that “the messiah will arrive before Pesach to liberate us [from corona]”. THE HEALTH MINISTER!!!!

Meanwhile Netanyahu’s unelected and unconfirmed government is issuing emergency proclamations regarding monitoring of cellphones to keep track of corona sufferers and involving the army in fighting the virus. The High Court has declared that the cellphone monitoring must stop by this Tuesday unless there is a Knesset committee to oversee it. The High Court has also been asked by Blue-White to rule on the legality of shutting down the Knesset.

Monday and Tuesday of this week are critical days. Will Gantz succeed in convening the Knesset, replacing its chairman and establishing the necessary committees to legislate and supervise? Can Netanyahu maneuver Gantz into an emergency unity government despite the objections of many in Blue-White? Will the High Court of Justice prevail? Will both sides fail, meaning Israel is heading for a fourth round of elections at some undetermined post-corona time, while remaining under Netanyahu’s ego-fueled, anti-rule-of-law control?

Q. Behind these alternative scenarios, there appear to be two very basic issues. One is Netanyahu’s desperate drive to remain in power and avoid prosecution despite the law and the absence of majority backing. The other is right-wing attitudes toward Israel’s Arabs as they consolidate their political clout.

A. Last week, by refusing to convene the newly elected Knesset, Edelstein, on behalf of Netanyahu, set off alarm bells regarding the anti-democratic lengths Netanyahu and his supporters might go to in order to hang onto power, with the battles against corona and against Israel’s Arabs as their rationales. Here are the responses of two very prominent Israelis.

Philosopher-author Yuval Noah Harari (Sapiens, 21 Lessons for the 21st Century) wrote on Sunday in the pages of Yedioth Ahronoth that Netanyahu’s decisions are about life and death, about the boundaries of our freedom, about the distribution of tens of billions. Right now these decisions are made by one man who is accused of bribery, fraud and breach of trust. . . . The people’s representatives are not monitoring what this man decides because he has shut down the Knesset. . . .

There are plenty of other countries issuing emergency regulations. This is necessary and legitimate. Those issuing such regulations in Italy or Canada are governments democratically elected by the people. Here the person issuing these regulations did not receive a mandate from the people. . . .

Tomorrow [Monday, March 23] is a test of survival for democracy in Israel. If tomorrow the Knesset does not convene, does not elect a new chairman, does not appoint committees--then this apparently won’t happen.

And former Mossad head Ephraim Halevy wrote in Haaretz on Monday: “If the thousands of Arab health workers--doctors, nurses, pharmacists--were to stay at home, the entire system would collapse. . . . Anyone who disqualifies the Arab MKs disqualifies their supporters, including the doctors who are currently saving the lives of Israelis--Jews, Arabs and Druze alike. This is a disgrace and, worse, a self-inflicted wound.”

Q. But can Gantz really form a governing coalition based on 61 MKs who include 15 from the Joint List and at least two right-wingers in Blue-White who object to a government dependent on Arab votes?

A. No. All Gantz is apparently trying to do is convene the Knesset and take control of it by replacing Edelstein with Blue-White’s Meir Cohen and establishing an Arrangements Committee (which sets up the other Knesset committees). He hopes to get High Court backing for these moves. Meanwhile, Netanyahu’s 59 MK backers are planning to boycott the Knesset. Gantz will then use the Arrangements Committee and Cohen to establish additional committees headed by Blue-White. If these moves succeed, he wants to introduce legislation that would prevent an indicted Netanyahu from forming future governments.

Gantz needs the 15 Joint Arab List votes and the tolerance of those two right-wingers for these measures, nothing more. If he succeeds in even some of these maneuvers, he plans to negotiate a unity government with Netanyahu from a position of political strength. On Monday at noon, the High Court ordered Edelstein to enable the election of a new Knesset chairman within two days. That is a step in the right direction. The Knesset will also have to find ways to enable meeting and voting in the coronavirus era; already several MKs are quarantined.

Q. But didn’t Netanyahu last Saturday night publicly offer Gantz a unity government based on parity, rotation after 18 months (first Netanyahu, of course) and some form of shared justice ministry (which could influence Netanyahu’s legal proceedings)?

A. On the face of it, this offer might look pretty good. Gantz appears to be tempted. Even Netanyahu’s demand that the serving prime minister, first himself and then Gantz, would appoint his own finance minister and Knesset chairman could be deemed reasonable.

But in addressing this proposal, Gantz faces two problems that are really one problem: Netanyahu has no credibility on the political center and left.

This means, first, that a “parity” government would not really be based on parity because major components of Blue-White—the two parties led by Yair Lapid and Moshe Yaalon—would refuse to join. After all, Blue-White’s electoral ticket for three straight elections has been “Just Not Netanyahu”. Lapid and Yaalon both served as senior ministers in Netanyahu governments in the course of recent years and both resolved after leaving or being dismissed, “never again”.

So Gantz would bring to the proposed unity government roughly 20 MKs, including Labor-Meretz. The Arab List would not be invited and would not seek an invitation (some of its more extreme members can barely bring themselves to cooperate in this week’s attempt to take control of the Knesset on behalf of Gantz). Even Labor-Meretz can’t be counted on; its third component, Gesher, meaning Orly Levy-Abakasis, has already defected to Likud in return for doubtful promises by Netanyahu.

Gantz could become foreign minister in an ostensibly parity-based unity government, and Gaby Ashkenazi of Blue-White defense minister. But Netanyahu would quickly find ways to neutralize this minority (20 out of nearly 80 MKs) in his “unity” government. And Blue-White would be finished. It would go the way of all its predecessor “centrist” protest parties that began with lots of votes and ended up in tatters. Remember Dash? Kadima?

Secondly, Netanyahu cannot be depended on to rotate the premiership after 18 months. He’ll find a way out. He’ll find a new and convenient crisis like corona. Gantz and Ashkenazi will then feel obliged to quit the coalition, following which Netanyahu could opt for new elections; currently he has polls showing the corona-fueled Likud bloc winning a majority. Or he could conceivably seek to get himself elected president, succeeding Reuven Rivlin (whose term will end about then) and guaranteeing himself immunity from prosecution until he is almost 80.

Q. By US and European standards, Israel seems to be dealing fairly successfully with the virus: only one death, and a “flattened” curve that somehow enables the health system to function. Surely that, and the immensity of the global crisis, put Israel’s political and corona dilemmas in a more positive light . Surely by international standards Netanyahu deserves some credit . . .

A. Yes, Netanyahu is a capable crisis manager, however insufferable his constant patting himself on the back and the sycophantic praise of his mediocre underlings. And yes, the corona-related problems Israel is suffering--lack of test-kits, lack of masks, unruly citizenry, financial compensation for unemployed, etc.--are shared with the rest of the world. But the danger pointed to by Yuval Noah Harari is real. This is the first time in Israel’s history that the party that lost elections has refused for even a day to transfer power. Israel could end up after corona with less democracy and less rule of law. Here Netanyahu personally constitutes a genuine danger to the country’s future well-being.

All this, in a country hard put to find unity and governance in the best of times between the mainstream, the likes of Litzman, and the Arab community.

Then too, the security threats that Israel faced three months ago have not gone away. True, they are dormant: Iran is preoccupied with a hugely mismanaged corona epidemic exacerbated by Trump’s mismanaged pressure campaign, while the Gaza Strip just registered its first two corona cases. But Iran and Gaza are instances where corona could actually provoke new military threats. It does not take much to imagine Iran and/or Hamas promoting attacks on Israel from Syria, Lebanon and Gaza to distract attention from wildly uncontrollable epidemics at home. Or Iran embarking on a lightning nuclear weapons program.

Is it sufficient that the IDF has placed submarine crews and pilots in sealed-off “capsules” to ensure that corona won’t impair the readiness and functioning of Israel’s military?

No. To deal with scenarios like these, with a huge corona-induced global and local economic crisis and with possible shocks to the international balance of power, Israel needs to be as united as possible behind leadership that is not exploiting its crises for political survival. Unfortunately, this is not the case.