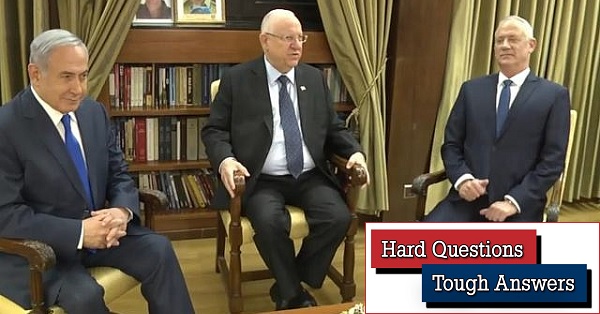 Q. What has changed over the past two weeks in Israel’s chaotic post-election scene?

A. Depending how you look at it, nothing at all--and a lot. Nothing, in the sense that we are no closer to forming a government, meaning that the prospect of a third round of elections is as alive as ever. And nothing, in the sense that it is still “all about Netanyahu”--his premiership, his indictments and his increasingly desperate political maneuvers.

Israel is still without a viable government. It is looking at the prospect of greeting 2020 with ministries barely functioning while calculating their monthly budget based on legislation passed in 2017. The deficit is growing alarmingly.

On the other hand, a lot has changed regarding the two main candidates for leadership, Likud leader Binyamin Netanyahu himself but also Blue-White leader Benny Gantz.

And then there is the much-ballyhooed threat from Iran, against the backdrop of Saudi and US reticence . . .

Q. Start with the bureaucratic paralysis. There is a new Knesset, right?

A. Yes, but without a new government based on 61 members of Knesset all ministers are serving in an “acting” capacity bereft of comprehensive authority. The only Knesset committees mandated to function are Foreign and Security Affairs and Finances, the former now led by Blue and White’s Gabi Ashkenazi and the latter by Torah Judaism’s Moshe Gafni. Without an approved new budget, there is little even they can do. No laws can be passed. Knesset committees cannot oversee government activities.

Q. Netanyahu still has the mandate from President Rivlin to form a government?

A. As of the beginning of this week, that was the case. But Netanyahu has failed to recruit Blue and White to join a government of national unity led by himself, involving all of his 55 right-religious backers in the new Knesset, and with “rotation” with Gantz ostensibly somewhere down the line. Accordingly, Netanyahu was expected to return the mandate any day.

Rivlin would then have the option either to offer the mandate to Gantz, who has by no means given up on forming a government, or to go directly to a 21-day stage in which anyone in the new Knesset is free to try to form a coalition of at least 61, failing which new elections take place after 90 days. Note that President Rivlin, in his remarks last week to the new Knesset, warned against this latter option of a third round of elections within a year--“the most expensive reality show in town”.

Gantz rejected Netanyahu’s offer to be number two in the hope of rotation after two years. Blue-White simply does not trust Netanyahu, whose credibility outside the right-religious bloc is zero. Blue-White’s Gantz is pledged to lead a “secular, liberal” government without an indicted Netanyahu. Last week he persuaded Yair Lapid of Yesh Atid, a major component of Blue-White, to release Gantz from his pledge to rotate the premiership with Lapid. Since Lapid is anathema to the ultra-Orthodox due to his insistence on reducing their religious privileges, this could help Gantz recruit one or both of the ultra-Orthodox parties to the coalition he will try to form. That would breach Gantz’s promise of a secular government but honor his pledge not to partner with Netanyahu.

Meanwhile, October 2 witnessed the commencement of hearings concerning the three corruption files pending against Netanyahu. This is something like a grand jury procedure without a grand jury. Netanyahu’s lawyers have an opportunity to persuade the attorney general and a battery of his lawyers to drop or reduce the charges. A request by Netanyahu, ever the populist demagogue, to televise the hearings was rejected out of hand by Attorney General Avichai Mandelblit.

The hearings will end this week, following which the attorney general will, within a few more weeks, announce indictments (unless he has been persuaded to drop all charges, which is extremely doubtful). It is at this point that Netanyahu could conceivably seek a plea bargain under which he would leave office in exchange for a radically reduced sentence.

Q. Is there a relative precedent here from the Ehud Olmert case?

A. Yes. In 2009 Prime Minister Ehud Olmert opted to resign the premiership, skip the hearing stage and go straight to trial on corruption charges. He ended up in jail. He and his lawyers had clearly misread the legal reality confronting them. In contrast, Netanyahu and his lawyers are avoiding the options of both resigning and skipping hearings.

Indeed, Netanyahu is pointedly taking steps to fortify his claim to remain prime minister. Last week he called briefly for new Likud primaries intended to reconfirm his leadership. He only backed off when Likud MK Gideon Saar, a declared rival, announced “I’m ready” to take Netanyahu on in a Likud primary election. Both the call for primaries and the abrupt about-face when confronted by a viable challenger appeared to reflect panic.

Now Netanyahu is instead demanding some sort of loyalty oath not only from Likud MKs but from the MKs of the right-religious parties constituting his 55-mandate bloc. This, in anticipation of the 21-day free-for-all coalition-forming period that Rivlin may soon invoke, is yet another apparent sign of panic on Netanyahu’s part. The idea is ostensibly to prevent a party like Shas (Sephardic, ultra-Orthodox), which has served in the past in left-center coalitions, from negotiating with Blue and White. But not all parties in the bloc may sign, and even if they do they are perfectly capable of changing their minds.

Last week, too, Netanyahu addressed the new Knesset and warned of grave new security dangers that required immediate national unity, both to shore up Israel’s defenses and to make the hard budgetary decisions required toward that end. This is the same Netanyahu who, in his campaigns in the April and September elections took credit for besting Iran in the Levant and making Israel a wealthy country. Still, his warning was echoed in President Rivlin’s Knesset-opening remarks: “This is a moment of emergency for Israeli security, Israeli society, Israeli democracy. . . . the system is having difficulty getting back on track”.

Q. “Difficulty getting back on track” is an understatement . . .

A. We see derailing political systems in the US, UK, Israel and for that matter in Hong Kong. A third round of elections followed by another political stalemate could be genuinely disastrous for Israeli democracy. The weeks ahead will tell us if enough members of Knesset are prepared to make the painful but necessary concessions needed to keep Israel’s highly fragmented and disjointed political system “on track”.

Q. How do you assess the Rivlin and Netanyahu veiled warnings about looming security dangers that must be met on an emergency basis with national unity?

A. Note that Rivlin hoped to jolt the politicians into forming a unity government regardless of who leads it, while Netanyahu meant a unity government headed by himself. One way or another, coming just before Yom Kippur, the anniversary of the disastrous 1973 war, the warnings resonated. The public inevitably asked itself if the security community was aware of some specific intelligence regarding a surprise attack, presumably by Iran and/or its proxy forces deployed near Israel’s border.

The public was informed Saturday night that Israeli Foreign Minister Yisrael Katz was engaged in negotiations with unnamed Gulf Arab states to sign non-belligerency agreements with Israel. Here the implication was that if Israel and, say, the UAE, were pledged not to attack one another (something they have never done anyway), this would somehow improve security against the common enemy, Iran.

I am not aware of early-warning intelligence regarding an immediate danger. It seems more likely that both Rivlin and Netanyahu, each for his own reasons, were referring to a general sense of foreboding in the intelligence community that reflects dangerous aspects of the evolving Middle East and related international situation.

Iran and/or a proxy force recently executed a brilliant long-distance drone attack on Saudi oil installations. It’s easy to imagine Iran and its allies in the Levant attacking Israel in a similar fashion. Those who worry about these things--with reason--note that Saudi Arabia did not respond to the Iranian attack and that President Trump talked his way out of responding in any way against Iran beyond sending a few hundred US soldiers to Saudi Arabia. In other words, with all due respect for its “friends” in Washington and Abu Dhabi, Israel would face such an attack alone.

Indeed, there are almost daily signals that the Iranian and American leaderships are close to a formula for engaging in de-escalatory negotiations that will have no near-term moderating effect on Iran’s threats against Israel. The UAE is already engaged in conciliatory talks with Tehran. And Trump has reportedly ordered US troops to leave northeast Syria and abandon the Kurds there to their fate at the hands of Turkey’s Erdogan--not at all a good sign from Israel’s standpoint.

Could Iran feel encouraged by US and Gulf Arab reticence to confront it? Could it attack Israel the way it attacked Saudi Arabia? That reportedly was the much hinted-at topic of an “emergency” Cabinet meeting held by Netanyahu on Sunday. Meanwhile there is unrest all around Israel: mass demonstrations not only in Iraq and Lebanon where Iran has a strong presence, but in Jordan and Egypt as well. Iran’s influence in the Gaza Strip is deepening. In Yemen its Houthi ally is defeating the Saudis.

If Iranian-backed attacks against Israel escalate, the Israeli civilian rear and infrastructure could suffer truly serious casualties. Israel’s anti-missile defense systems could be overwhelmed. Unlike Saudi Arabia, Israel would respond immediately and powerfully. Would Trump join a military campaign against Iran? Would the Gulf Arab states? Israeli Intelligence has persuasive reasons for skepticism.

Q. That seems indeed to justify a unity government, and sooner rather than later.

A. Obviously, these are circumstances in which it would be helpful for Israel’s political leadership to stand at the head of a broad national-unity government. If nothing else, this would function as a powerful deterrent signal against Iran. It would also be able to levy the taxes and appropriate the funds needed by Israel’s security establishment to fend off attacks like the one against Saudi oil installations.

But a unity government under Netanyahu, the man who once told CNN he wants to be remembered as the “Shield of Israel”? This is the man who three times less than a decade ago threatened dangerously to attack Iran preemptively and had to be restrained by wiser security thinkers like Gantz and Ashkenazi. The man who went public at the UN and elsewhere with Israel’s hitherto clandestine and highly effective efforts against Iran, thereby damaging Israel’s security. The man who undermined US President Barack Obama’s efforts to restrain Iran’s nuclear project, by-the-by jeopardizing the support of the Democratic Party for Israel, and then encouraged Trump to scuttle the JCPOA nuclear deal--an effort even Trump now seems anxious to walk back.

Netanyahu did not “discover” the Iranian threat. PM Yitzhak Rabin first noted it as a reason for his search for a Palestinian solution back in the early 1990s. That equation still stands, despite Netanyahu’s best efforts to exaggerate the Iranian threat, ignore the Palestinian demographic and democratic threat, and link Israel’s security to a failed and faulty US president who has proven incapable of dealing with either threat.