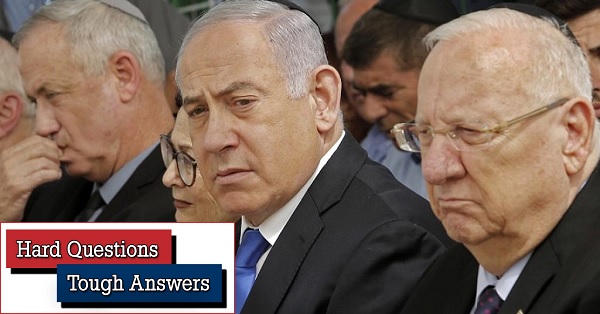 Q. Do you see a link between the current tensions in the Persian Gulf region and the aftermath of Israel’s elections?

A. The attack on Saudi Arabia’s oil infrastructure and the Trump administration’s ongoing refusal to get dragged into a new Persian Gulf-centered conflict have potentially heavy ramifications for Israel. The Gulf crisis is playing out against the backdrop of what could well be a prolonged electoral, constitutional and legal crisis in Israel. Without a stable government, Israel may be severely constrained in reacting to provocations from Iran and its proxies.

Accordingly, in looking at the aftermath of last week’s Israeli elections, we have to keep our eye on the Persian Gulf region.

Q. Let’s start with the election aftermath. Where do we stand?

A. With final results in, Benny Gantz and Blue-White are ostensibly the winners, with 33 mandates to Likud’s 31. As of Sunday, when the parties began dialoguing with President Rivlin, Likud represents a bloc of 55 mandates while Blue-White has 57, reflecting the unprecedented readiness of the 13-strong Joint Arab List to recommend that Rivlin choose Gantz to form a government.

But Blue-White’s situation is not so clear-cut. The moment the Joint List left the presidential residence in Jerusalem, the extremist Balad party--one of four Arab parties comprising the Joint List--announced that its three mandates took exception to the recommendation, leaving Gantz with only 10 Joint List mandates and only 54 in his bloc. That is enough to prevent a Netanyahu government from emerging as long as Avigdor Liberman insists that Yisrael Beitenu’s eight mandates join only a unity government. But it is not enough to claim the largest bloc of Knesset votes.

In any event, as of Monday Netanyahu could claim the right to ask Rivlin for a mandate to form a coalition based on his 55 recommendations. He apparently believes he can poach a handful of members of Knesset from the center-left to get to 61, or form a minority government. At the broader strategic political level, it is important for him to retain the title of prime minister as he moves into the hearing (Oct. 2-3) and indictment process over the corruption allegations he faces.

Indeed, the likelihood that Netanyahu will get the nod from Rivlin is increased by what appeared on Monday to be a Blue-White decision to stand aside and let Netanyahu try and fail for 28 days. The thinking is that it will be easier for Gantz, who leads the bigger party and insists that Netanyahu cannot continue at the helm, to form a coalition once the reality of Netanyahu’s failure has sunk in. The “system” will have been softened up, and everyone will have sobered up to the looming threat of a highly disruptive and destructive third round of elections in early 2020 if Gantz fails to coopt one or more parties from the right, beginning with the Likud.

Back to Rivlin. He has a host of options. He almost certainly will try to persuade Gantz and Netanyahu to compromise on a unity government with a rotating premiership. Somewhere down the line, if both Netanyahu and Gantz fail, Rivlin will face a final 21-day period of free-for-all attempts at coalition-forming. If that too fails, this new Knesset will disperse in mid-January for another round of elections, probably in March. But before that, in the final 21 days at his disposal Rivlin could conceivably turn to Liberman and suggest he head a coalition with both Gantz and Netanyahu, perhaps for a transition period. Labor-Gesher’s Amir Peretz could also be a candidate for this task.

A prime minister from a minor party, presiding over the two main parties? This would be a new precedent for Israel.

At the end of the day, it comes down to Netanyahu’s insistence on remaining prime minister as he faces indictment. But without a majority coalition to legislate immunity and to enact a measure to override a High Court decision backing indictment, even this refuge will be short-lived. This election was about Netanyahu and, thus far, so are the coalition discussions.

Q. Is it possible for Likud to depose Netanyahu as leader to enable a unity government with Gantz as prime minister, perhaps rotating with some other Likudnik?

A. Of course it's possible. But for the moment it looks doubtful. One problem is that the Likud Knesset list is full of sycophants and mediocre apparatchiks who owe their political status to Netanyahu. This is not the comparatively liberal Likud of Menachem Begin and Yitzhak Shamir. It is a very different, ultra-nationalist party that scoffs at the rule of law in Israel. It is Netanyahu’s creation.

Another obstacle to deposing Netanyahu is that some in the Likud are still convinced they can poach a few members of Knesset from the center to give them 61. A third problem is that Gantz is a political novice, as are his fellow ex-generals, and they can conceivably be outmaneuvered. A fourth is that Netanyahu has not (yet) been indicted.

A fifth issue is that “kingmaker” Avigdor Liberman, who currently nobly insists on a Likud-Blue White unity government (which with 64 MKs doesn’t even need his party’s eight votes) has not always held the role of knight in shining armor in Israeli politics. The Likud, his former political home, may understandably believe that Liberman remains at heart a conniving politician whose allegiance merely has a high price.

Q. So has anything momentous happened here, less than a week after elections, to offer hope for the near future of Israeli politics?

A. Three positive developments. First, with a fairly high degree of probability, Netanyahu faces removal from power after a ten-year period of rule. And he faces the Israeli judicial system, which has survived his attempts to emasculate it.

Second, at least 10 out of 13 members of the Joint Arab List, including one Jewish member, have signaled that they want to play a role in mainstream Israeli politics. They are not currently asking to be part of a Gantz coalition. Many of their demands, e.g., regarding land rights and law and order, can easily be met. It remains to be seen whether Blue-White will step up to this challenge in return for ongoing Arab Knesset support.

And third, thanks first and foremost to Liberman’s strong electoral stance, if a unity government emerges it could seriously curtail Orthodox and ultra-Orthodox influence over the lives of Israel’s secular and “traditional” majority. It is not too late to legislate the institutionalization of liberal values in Israeli economic, social and educational life: Sabbath transportation and commerce, civil marriage, and compulsory instruction in non-religious subjects like civics and English for the ultra-Orthodox.

Q. Back to the Persian Gulf tensions and particularly the spectacular attack last week on Saudi Arabia’s energy installations. What are the strategic factors there that could affect Israel during the weeks of uncertainty ahead?

A. Whether by proxy or directly through impressive subterfuge, Iran has just demonstrated a capacity to disable major components of the world’s energy infrastructure. Saudi Arabia, accordingly, has again--as in the protracted war in Yemen--been revealed as a paper tiger at the military level. It is incapable of defending its most valuable and sensitive strategic assets at Abqaiq and Khurais.

Needless to say, this is a major intelligence failure not only for Riyadh but for Washington, which still can’t explain exactly where the attack drones and cruise missiles came from. And it is a major demonstration of Iran’s capacity to plan aggression against strategic targets.

Further, President Trump has demonstrated, for better or for worse, that when push comes to shove he will avoid committing US troops to combat in the Middle East, even on behalf of his Saudi ally and business partner. He believes he has alternative, non-lethal means to deter Iran. The attack on Saudi oil installations seems to send a very different and dangerous signal about Iran’s response to Trump.

Q. And Trump and Israel? Is there a direct Saudi-Iranian connection?

A. Note Trump’s refusal to contact Netanyahu after Israel’s elections and his comment that “our relations are [not with Netanyahu but] with Israel”. After all the electoral gifts Trump gave Netanyahu--Jerusalem, the Golan, no serious peace process--this particular US president is known to detest “losers”.

Not only does this generate an immediate problem for Netanyahu. It could mean a dilemma for Israel in general. Regarding Netanyahu, who for the moment remains prime minister of an interim government, recall that a week before elections he was severely embarrassed by rockets launched from Gaza at Ashdod at the very moment he was giving an election speech there. Reliable media reports indicate that his immediate response was to demand heavy military punishment of Hamas and Islamic Jihad in Gaza, thereby possibly triggering a war, and to advise the Electoral Commission that a postponement of elections was in the cards. This, against a backdrop of Netanyahu’s extreme caution regarding Israel’s response to rockets from Gaza until then. Luckily, the IDF command and the attorney general prevented the Israeli attack, which was obviously intended to bolster’s not Israel’s deterrence but Netanyahu’s.

Netanyahu presumably believed Trump would back any step he took in Gaza. Netanyahu has also, for years now, trumpeted Saudi Arabia as an important strategic ally in the conflict with Iran. Now both those assumptions must be questioned.

As for Israel, lest we forget, its conflict with Iran and its proxies continues--in Iraq, Syria, Lebanon and Gaza. The events noted above, both in Abqaiq and in Ashdod, call into question the degree of intelligence and operational support Israel can hope to receive from its seemingly witless Gulf “allies” in Riyadh.

Also of concern is Trump’s approach to the Gulf tension, a nearly unintelligible combination of aggressive bluster and strategic fear of the consequences of that bluster, which renders him at best an unreliable ally for Israel in the event of escalation on any of its anti-Iran fronts. Under Trump (and Obama before him), the US wants to reduce its Middle East profile and its regional deterrent profile has been eroded. Now Trump’s strategy toward Iran has failed. This is also a major failure for Netanyahu, who built his grand strategy for dealing with the entire region on these shaky foundations.

Of greatest concern, the attack in Saudi Arabia poses the possibility that Iran will plan or sponsor or directly carry out highly destructive long-distance attacks on strategic targets in Israel. Abqaiq puts Israel on notice. Meanwhile, at least we can be thankful for the IDF general staff and the attorney general. Presumably they will again assume the role of responsible gatekeepers if Netanyahu, in his remaining time as prime minister, again initiates an act of recklessness.