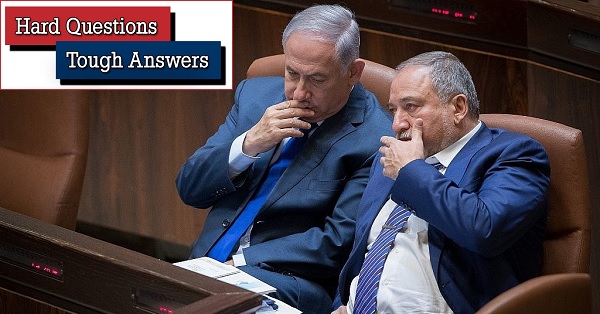 Q. It’s Tuesday, May 28. PM Netanyahu has until Wednesday night to form a government. So far he hasn’t signed a single agreement with a coalition partner. Now we are told that Israel may confront another round of Knesset elections in September. What happened?

A. Ostensibly, the issue at stake is the refusal of Avigdor Liberman with his five mandates to accept a compromise with the 16 ultra-Orthodox members of Knesset regarding the details of mandatory military service for a minority of yeshiva students. If one side blinks and a compromise is agreed, Liberman’s Yisrael Beteinu joins the coalition, all the other partners (the ultra-Orthodox, the far right, Moshe Kachlon’s Kulanu) presumably hasten to sign, and by Wednesday at midnight Netanyahu presents his coalition of 65 members of Knesset.

Ostensibly, the legal issues surrounding the criminal charges against Netanyahu are not a major stumbling block. All 65 potential coalition members agree to vote for immunity for Netanyahu if and when he is indicted. All agree to vote for a basic law that allows the Knesset to override the High Court of Justice if and when the latter rules that the immunity vote is unconstitutional--or, for that matter, on any other issue. Nearly all are prepared to be rewarded by Netanyahu, in return for their agreement to begin dismantling democratic checks and balances, with measures to annex parts of the West Bank.

In all of this, US President Trump appears to be a willing cheerleader. After all, his problems are not all that different from Netanyahu’s.

Q. These arguments don’t explain why, after a month and a half, Netanyahu has not signed a single coalition agreement. And why Liberman with his puny coterie of five mandates, and having been offered (again) the Defense Ministry portfolio, is threatening to plunge the entire Israeli political system into turmoil.

A. The real answer lies in Netanyahu’s radically altered image and status due to the threat of indictment. Netanyahu comes across today as a politician prepared to throw the entire Israeli system under the bus in order to save his political skin and avoid prosecution. (Actually, there are fully five MKs facing indictment among the potential coalition partners--an indication just how low the entire system has sunk).

Netanyahu’s potential coalition partners understand that, unlike in coalition talks of previous years, this time they are dealing with a desperate man. He can be squeezed. Accordingly, they are presenting highly inflated demands in return for entering a Netanyahu government and voting for anti-democratic measures tailored to the needs of one man.

Virtually the entire Israeli legal establishment, from Chief Justice Hayut and Attorney General Mandelblit across the board to criminal and corporate lawyers--some of them celebs and most unknown to the public--is up in arms against the threat from the ultra-nationalist religious right to alter the balance of powers within the system to the detriment of the judicial branch and in favor of the legislative branch. But they don’t vote in the Knesset.

In presenting coalition demands, Liberman is actually the most reasonable of those negotiating with Netanyahu: he wants the status quo ante in terms of ultra-Orthodox conscription and the same portfolios for his Yisrael Beteinu party as last time around. In contrast, the neo-fascist Kahanist far right wants the education and justice ministries!! The ultra-Orthodox want lots of money for their parasitic, non-productive religious institutions. Kulanu’s Kahlon is prepared to return to the finance ministry but only if he can curb ultra-Orthodox demands on the budget. And hungry Likud veterans (fully 35 MKs, a majority out of a proposed 65-MK coalition) have yet to be allotted a single ministry.

Liberman, the secular ultra-nationalist, is also seemingly turning this confrontation into a struggle to preserve, or maintain, or rescue secular Israel. That’s a popular stand with many Israelis. If new elections were held today, and despite Liberman’s thuggishness and anti-Arab racism, he might double his five mandates at the expense of Meretz and Blue-White.

Q. If Netanyahu can’t form a coalition of 65 due to Liberman’s position, aren’t there alternative constitutional options besides new elections?

A. There are many. Netanyahu has rejected them all thus far. For example, he can present a minority coalition of 60; Liberman would almost certainly not vote against it. Netanyahu can return his mandate to President Rivlin who can then charge another politician--Gideon Saar or Yisrael Katz from the Likud, for example, or even Kachlon, who commands broad respect--with forming a coalition in the course of another month and a half. The Knesset can vote by a 61 majority to ask Rivlin to give Netanyahu more time.

In rejecting these options, Netanyahu is consciously upping the stakes. Liberman is thus far not blinking in this poker game. Lest we forget, Israel’s last two Knesset elections were called early by Netanyahu for narrow personal-political reasons: once to avoid a Knesset move against Sheldon Adelson’s freebee daily Yisrael HaYom that supported him, and in March of this year in the hope of preempting the criminal charges against him.

Now Netanyahu may just think new elections will somehow rescue him politically. Could elections possibly delay legal proceedings even further? The outcome is obviously a gamble. But if at least 61 Knesset members continue blindly to do Netanyahu’s bidding, Israel may have repeat elections in September. On the other hand, were Netanyahu to step aside and enable an alternative coalition not headed by him, he would find himself exclusively in the hands of the attorney general, the judges and those elite defense lawyers of his whom he falsely claims he can’t pay. Ask Ehud Olmert what that’s like.

Q. Has Netanyahu even been negotiating in good faith? In years past he would have bent his coalition partners to his will weeks ago. He is, after all, a master politician.

A. Certainly one can argue that, confronted with the threat of jail time, Netanyahu’s judgment has been impaired. Why didn’t he negotiate simultaneously with both the right-religious and Blue White regarding two alternative coalitions, so he could play one bloc off against the other? Why not appoint Kachlon minister of finance from the start so together they could fend off extortionist ultra-Orthodox demands?

Going a step further, why not step aside, face the legal music, and make a comeback two years hence if, as Netanyahu insists, he is not guilty of any wrongdoing? Why not sell his villa in Caesarea and nobly pay his own legal expenses? It is truly difficult to avoid the impression that Netanyahu knows he’s guilty and is panicking and malfunctioning. Certainly, that’s what his potential coalition partners seem to be thinking.

Q. But isn’t there, somewhere, a principled and honorable Israeli political right?

A. Isn’t there a principled American political right? In both countries we witness the right-wing mainstream, with few notable exceptions, bowing to anti-democratic, anti-pluralistic, autocratic elected leaders.

Israel used to be led by the principled right. Lest we forget, here is Menachem Begin, writing in 1951: “The people, if it chooses elections, must establish its rights even in the face of the parliament--lest the [parliamentary] majority, which serves power more than it regulates it, deny those rights. This can be achieved only through the supremacy of law . . . and by authorizing the judges to negate the authority of a law that . . . contradicts civil liberties.”

Years earlier, Zeev Jabotinsky wrote that “in the Jewish state it will be necessary to develop a form of government in which the minority won’t be defenseless . . . [by guaranteeing] a situation of total equality of rights . . . ”

Israel’s Attorney General Avichai Mandelblit is, like President Rivlin, a disciple of Jabotinsky and Begin. Israel’s High Court comprises a number of judges from the ideological right. Both of these legal institutions are standing firm against Netanyahu’s intentions. If the latter prevails in forming a government and enacting anti-democratic legislation to save his own skin, Israel may face a constitutional crisis.

Q. Yet Netanyahu may prevail. He is, as you say, a master politician.

A. The system may have become too corrupted. The creeping ultra-nationalism and ultra-religiosity launched upon Israel by the conquest of the Temple Mount and the West Bank 52 years ago may overwhelm us. Trump and Twitter are on the side of the extremists.

Then there is the other side’s extremism: the stupidity of Saudi Crown Prince Mohammed bin Salman; the fanaticism of Islamists in Tehran and Gaza; even the stubborn refusal to bend on issues like the Temple Mount and the right of return displayed by the otherwise moderate Palestinian leader Mahmoud Abbas. All these and more have encouraged and enabled Netanyahu and his right-religious followers to adopt increasingly extreme positions.

And yet, first and foremost, we will have ourselves to blame.