Hard Questions, Tough Answers with Yossi Alpher (March 9, 2020) - The United Arab Party is the Key to a Coalition, but Beware the Corona Crisis 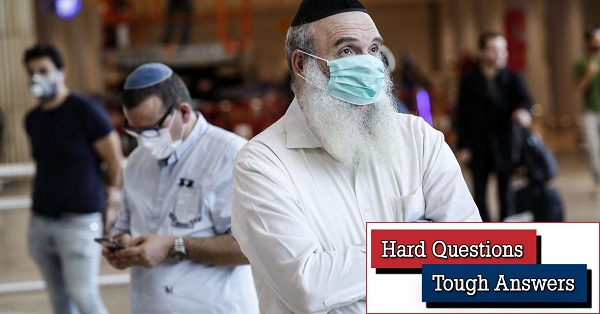 Q. Contrary to the exit polls, once all the votes were counted from last Monday’s elections Netanyahu ended up with a “bloc” of only 58--three mandates shy of a coalition majority. As the parties line up to talk to President Rivlin, what are Netanyahu’s chances? What are Gantz’s chances?

A. Interim Prime Minister Benjamin Netanyahu has almost no chance to form a government. If he tries to form a minority coalition of 58 with Likud’s allies on the far right and the right-Haredi (ultra-Orthodox) parties, he will lose a vote of confidence to the other 62 members of this new Knesset. Still, because he heads the largest party--Likud has 36 mandates to Blue-White’s 33--Netanyahu will try to persuade Rivlin to give him first crack at forming a coalition. That way he can play for time, try to poach right-wing MKs from Blue-White, and perhaps even try to buy off Arab MKs from the Joint List. The indicted Netanyahu is desperate to remain in power.

To stop this from happening, Blue-White leader Benny Gantz has to persuade all 62 anti-Netanyahu MKs to recommend to Rivlin that Blue-White get the nod to form a coalition. The idea is that, while the 15 MKs from the Joint Arab List don’t actually join the coalition, meaning that it will function as a minority government, they will vote to ratify it and the laws it proposes to the Knesset.

But this is tricky. Gantz apparently wants to form an unprecedented coalition among genuine political and even ethnic enemies for the declared purpose of removing Netanyahu and passing the emergency budget and belt-tightening measures that Israel desperately requires after a year of temporary transition governments. Gantz has persuaded the fervently anti-Arab Avigdor Liberman (Yisrael Beitenu, seven MKs) to coexist with the Joint Arab List in the interest of deposing Netanyahu. Liberman’s price--legislation on the secular issues like Sabbath transportation that Liberman champions--is acceptable to the predominantly secular Blue-White.

Gantz has also persuaded Blue-White’s leading right winger, Moshe Yaalon to accept a deal with the Joint Arab List. But Yaalon’s two ex-Likud partners in his faction within Blue-White, Zvi Hauser and Yoaz Hendel, still need to be convinced. Labor-Gesher-Meretz, the final Zionist partner in this prospective coalition, is more than willing to facilitate Israel’s first genuine Jewish-Arab political partnership.

Then there is the Joint Arab List. It does not want to be part of a coalition with Zionists. Its demands regarding budgetary allocations and amendment of Netanyahu’s racist Nation-State Law are broadly acceptable to Gantz and his Jewish partners. So, reluctantly, are 12 out of the Joint List’s 15 MKs, including the Islamists among them (recall: the Joint List is itself a coalition of four Arab parties). But the final three MKs belong to Balad, a secular, ultra-nationalist Arab party whose MKs tend to identify openly with Israel’s Islamist and terrorist enemies.

For the moment, Joint List head Aiman Odeh, who has proven himself a highly accomplished politician, is playing hard to get. Understandably, he wants to be treated by Gantz like a bride, not a mistress, and to be invited to open and public discussions of his coalition-support terms. Yet even Odeh’s ability to deliver Balad’s three votes on key issues is not guaranteed.

Q. Could a Gantz minority coalition with Arab backing last more than a few months?

A. That is one of the key questions confronting Gantz. One version of his coalition platform has it legislating first an emergency budget, then a ban on an indicted politician being charged with forming a government, then dissolving the coalition and initiating new elections. Regardless of how these next elections end up, Netanyahu would not become prime minister. (The legislation could not apply to the March 2 election outcome because it cannot be retroactive.)

Rivlin, by the way, could invoke the same ethical principle and simply refuse to award the indicted Netanyahu the mandate on moral grounds. Such a move would send the entire issue to the High Court of Justice. But Rivlin, who is nearing the end of his presidential term and his political career, has signaled no such noble intention.

Meanwhile Netanyahu, at his demagogic best, hammers away against the prospect of Blue-White ostensibly betraying all that is sacred to Zionism by collaborating with Arabs: “Gantz and Liberman are trying to steal the elections and cancel the people’s decision.” Netanyahu should reread his supposed ideological mentor Zeev Jabotinsky, for whom an Arab vice-president of a Jewish state (he assumed Israel would have a presidential system) was a foregone conclusion.

The days ahead will tell us how successful Netanyahu or Gantz are, where Rivlin stands, and whether a Gantz minority coalition with the Joint Arab List is even capable of coming together.

Q. How did Israel’s Arabs, some 20 percent of the population, move in the course of three successive elections from the margins of Israeli politics to the center?

A. The Joint List has grown from 10 to 15 MKs in a year. Its four component and highly disparate parties (Islamists, Communists, ultra-nationalists, mainstream secularists like their leader Odeh) display total solidarity. How did this happen? Credit the Jews for making a series of stunning miscalculations.

First, the anti-Arab Avigdor Liberman, back in 2014 when he was Netanyahu’s coalition partner and foreign minister, engineered a law requiring a party to gain at least four mandates (3.25% of those voting) in a Knesset election to qualify. At the time, Israeli Arabs were represented in the Knesset by several small parties, some with only three mandates. Liberman thought he could reduce their Knesset profile. But surprise, surprise, the Arabs merged their parties into a single list (at one point, two lists). Since 2014, the only parties kept out of the Knesset by Liberman’s initiative are from the messianic far-right.

Then, in July 2018, Netanyahu’s ultra-nationalist coalition passed a Nation-State Law that declares Israel to be "The nation-state of the Jewish people, and the Jewish people alone". Not only Arabs, but Israeli Druze and many secular Israelis took offense. The Arabs, by now organized into the Joint Arab List, turned this ultra-nationalist insult into a vote getter. Since then, Netanyahu has followed up with consistent quasi-racist anti-Arab incitement in repeated election campaigns: bait for his ultra-nationalist base. Gantz, too, in trying to poach right-wing votes from Likud, vowed to form a government that is not dependent on Arab votes even though this was and is clearly a mathematical impossibility if Blue-White is to form a government without the right.

Finally, in a pathetic reflection of Netanyahu’s success in scaring Jewish voters away from Arabs, even the leftist Labor-Gesher-Meretz list demoted Meretz’s stalwart Arab MK, former Kafr Qassem mayor Isawi Freij, so far low on its electoral list that he was not among the mere seven MKs the list gained in these elections. Arab citizens of Israel whose support was a fixture of Meretz’s identity transferred their votes to the Joint List.

Under Odeh’s capable leadership, the Joint Arab List turned all these insults into an angry get-out-the-vote campaign among Israel’s Arab citizens. Gone are the days of low Arab vote turnouts due to indifference, despair over Arab political infighting and persistent corruption and violence. On March 2, a high 71.5% percent of all qualified voters in Israel voted: the 20 polling stations that registered the highest increase of voters compared to last September were all in Arab communities!

So there are no Arab MKs in this Knesset on behalf of Zionist parties. But there are 14 Arabs and one Jew (a Communist) in the Joint List. And they cannot be ignored.

Q. Meanwhile, the corona virus, covid-19, is spreading in Israel. How will this affect politics? The economy? Is there a strategy for dealing with corona in Israel?

A. Despite Netanyahu’s years of impoverishing all Israeli public services, Israel’s Ministry of Health has thus far dealt capably with corona. Currently only some 40 Israelis are known to be infected, nearly all from visits abroad or from tourists. No one has died and one person is in critical condition. But the Health Ministry predicts that ultimately, corona could infect more than half the population and at a bare minimum, tens of thousands.

Already, tens of thousands are quarantined in their homes for fear that they have been exposed to the virus. A growing list of countries’ citizens are banned from entry to Israel. (Netanyahu has not yet put the United States on the list for fear of angering his ally President Trump, who downplays the corona epidemic; together they are jeopardizing the health of both Israelis and Americans for the sake of politics.) Israel’s tourist industry is paralyzed. Airlines are not flying. Ben Gurion Airport is a ghost town.

Under these circumstances, the strategy offered by health officials is to delay to the greatest extent possible the spread of the virus. Instead of peaking, say, in April, the curve of the ill, exposed and quarantined will be flattened and spread over the coming six months or more. Every effort will be made to keep foreign carriers out and prevent the disease from taking root in Israel itself. That’s what the ban on tourists from Europe and the Far East is about. The reasoning is that slowing down the spread of the virus will ease the economic burden and the pressure on hospitals. The idea is that Israel must avoid looking like northern Italy, where thanks to poor public health management 16 million people are now under lockdown, with disastrous economic ramifications reverberating throughout Italy and much of Europe.

Israel is beginning to lock down the Palestinian Authority as well. It is weighing a ban on the 160,000 West Bank Palestinians who commute daily to work inside Israel and in settlement-linked industrial zones. The economic consequences for both Palestinians and Israelis could be disastrous.

A. With the economic ramifications of corona threatening to worsen by the day, and with all due respect for the Health Ministry’s rearguard strategy, Israel desperately needs a functioning government. It needs a new budget--under the circumstances, an emergency deficit budget--to fund the fight against corona and the measures necessary to prop up the economy until the danger passes. And it needs leadership with broad public appeal to make this happen.

Not only is the economy teetering; so is Israel’s entire democratic system. Netanyahu as much as threatened civil strife if Gantz forms a government supported by the Joint List.

If Rivlin can do the trick, so be it. Certainly he should step up and start leading. As a veteran advocate of integrating all Palestinians into Israeli society (see Jabotinsky, above), he should have something to say.

Then too, if corona provides politicians with the excuses they need to climb down from their incitement and their pompous and often ugly promises to the voters, that could work too. Meanwhile, the clock is ticking on a plodding political process that may fail, precipitating stalemate and a fourth round of elections.

Former national security adviser Giora Eyland summed up the dilemma neatly in Monday’s Yedioth Aharonot: “There is a national requirement for decisions to be made. On the one hand, they can’t wait for a new government to form. On the other, the existing government cannot make them.”