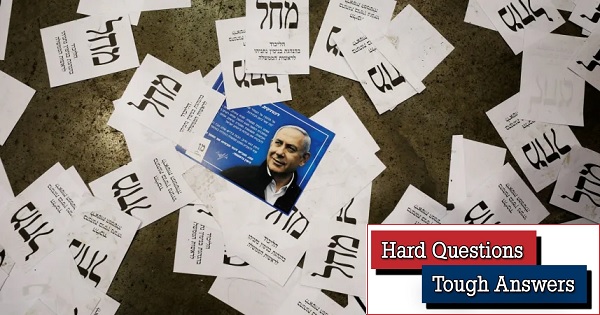 There were 6.3 million eligible voters and over 10,000 polling stations, including 16 mobile stations for about 4,000 quarantined corona voters.

The above count does not include some 265,000 votes of soldiers, diplomats abroad, the Corona virus quarantined, and prison population, all of whose ballots take longer to document and count (it is not even clear who will dare physically count the Corona voters’ paper ballots). This is the equivalent of seven or eight mandates. The bulk of these, the soldiers’ votes, generally have the effect of removing a mandate from one or more religious parties and adding a mandate to one or more of the secular parties.

Note: the movement of one or two mandates could prove decisive in ultimate efforts to form or block a coalition--a possibility that is of necessity ignored in the following analysis.

Q. You are writing this Q & A about the elections against a deadline, yet without final results. Given this constraint and based on the results at hand, what significant conclusions can you offer about the next government?

Yet, second, Netanyahu’s Likud is once again the largest party, leading Blue-White by four mandates, and the right-religious bloc is again the largest, by a four-mandate margin. This is Netanyahu post-indictment, with his trial commencing in two weeks! In this election he demonstrated that despite the corruption charges and with the help of endless ugly maneuvers, dirty tricks and uninhibited mudslinging, he can maintain the loyalty of nearly half the electorate to his party and its allies.

In the eyes of the other half, Netanyahu demonstrated that for too many Israelis the rules of law and decency are not important, and that the primacy of sovereign national values (“mamlachtiut”) introduced by David Ben Gurion is no longer respected.

Third, “nearly half” is an important stipulation. Netanyahu is still two mandates shy of the 61 mandate Knesset majority he needs to form a government and, through legislation, try to shield himself from prosecution and conviction.

Fourth, Blue-White’s decline to second-largest party reflects a failure to counter Netanyahu’s blunt tactics and boundless conspiratorial energies. Netanyahu blitzed voters with endless clips and robot-calls promising victory if only his supporters will get out the vote. He concocted endless preposterous lies and allegations about Gantz, from fear of attacking Iran to an affair with a minor. It was enough that even a little of the mud stuck.

Gantz’s response was a far more civilized campaign aimed at stopping Netanyahu, but little more. If the outcome is a fourth round, Blue-White leader Benny Gantz may step aside. He has emerged as too mild-mannered and upstanding for the Israeli electorate with its consistent drift to the ultra-nationalist right. His rhetorical skills, compared to Netanyahu’s, leave something to be desired. The Blue-White party may now be in danger of disintegrating into the three smaller lists that formed it.

If Bibi is the clear winner of this round--though still short of a government--Gantz is the clear loser. Indeed, all three of Blue-White’s ex-IDF chief of staff leaders, all raised on “mamlachtiut”, proved no match for Netanyahu’s consistent sleaze tactics.

To save Blue-White, the best bet to replace Gantz at the party’s helm is Gaby Ashkenazi, another former IDF chief of staff who in three straight elections has displayed more charisma that Gantz. It was Ashkenazi who, scarcely a year ago, brought together Gantz’s and Moshe Yaalon’s nascent parties with Yair Lapid’s Yesh Atid to form Blue-White. And as a Mizrachi or Sephardic Jew of mixed Syrian-Bulgarian heritage he might be better suited to draw votes from Netanyahu’s Likud and even from Shas, which performed surprisingly well this time around.

Fifth, the United Arab List with 15 mandates, up from 13, is growing from election to election by recruiting more and more Arab votes. It is declaring that, politically, Israel’s Arab sector can no longer be ignored. The United List’s achievement this time around is truly dramatic, possibly overshadowing Netanyahu’s.

Sixth, if anyone needed proof that the parties of old that used to run things in Israel have become totally defunct, this election delivered it. Labor, together with Meretz and Gesher, is down to 7 mandates. Yamina, which embodies the remains of the National Religious Party, the “Mafdal”, is down to 6 mandates. Labor along with what is today Meretz and the NRP used to run the country. How the mighty have fallen!

Q. Assuming no significant change in this outcome in the next day or two, what can we expect? What are your scenarios?

A. Here they are, in no particular order (order seems impossible in the current chaos):

A fourth round next October or November cannot be excluded. Still, a rising wave of disgust among the public and the politicians, supported by President Rivlin, could motivate one or more parties or politicians to cross over the political divide, if only to form a “temporary” coalition with the goal of legislating our way out of this mess.

Here the prime candidate is Avigdor Liberman and his “right-secular” Yisrael Beitenu. Throughout these three consecutive elections, Liberman has placed himself beyond the two blocs, thereby helping prolong Israel’s political stagnation. He has promised voters “no fourth round”. Will he now opt to rejoin Netanyahu in a right-religious coalition? Alternatively, will he overcome his visceral opposition to the ever-growing Joint Arab List and agree to join Blue-White and Labor-Gesher-Meretz in a centrist minority coalition that is supported externally by all or part of the Arab members of Knesset?

Could Rivlin refuse to empower the winner, Netanyahu, to form a coalition, citing the fact that Netanyahu is under indictment on multiple counts of fraud and breach of trust? Such a courageous move could give the final word to the High Court of Justice, to which Netanyahu would appeal.

Could another right-wing party like Yamina bolt and join with Blue-White?

Could Blue-White be persuaded by Netanyahu and perhaps by Rivlin to join with Likud in a centrist coalition that features rotation of the premiership and some provision regarding Netanyahu’s pending trial? This option was rejected last time around by Blue-White. Among other objections, Blue-White consistently cited Netanyahu’s lack of credibility when he agrees to rotation.

Conceivably, too, Netanyahu could persuade two or three members of Knesset from the center-left to bolt their parties and, in return for ample political rewards like ministries, join or rejoin the Likud to give the right-religious bloc a 61 MK majority. Netanyahu and his closest allies have been hinting at this possibility for days, ever since pre-election polls showed the Likud pulling ahead of Blue-White in the vote count. Candidates with known right-wing inclinations include Orly Levi-Abakasis of Gesher, the ultra-Orthodox Omer Yankelevitch of Blue-White, and former Likudniks Zvi Hauser and Yoaz Hendel of Blue-White.

Speaking of coopting, Netanyahu has in the past not shied away from doing deals with Arab parties. Could he try to offer all or part of the Joint Arab List inducements to support, even passively, a Likud-led government?

Q. At the level of values and issues, can you point to Netanyahu’s advantage and Gantz’s disadvantage as demonstrated in these elections?

A. This is not an easy task. Netanyahu convinced his electorate that the corruption accusations against him are trivial at best and that he can manage a government while dealing with them or, alternatively, legislating them away. He will prioritize some sort of rule of the masses, or just obscure and confusing reasoning, over the rule of law. Here, for example, is prominent Netanyahu supporter Yifat Erlich’s astounding logic, in Yedioth Aharonot on March 1: “Precisely because PM Benjamin Netanyahu can no longer be pressured and no one can threaten him with indictment because he already has three of them, he can restore the state of Israel to democratic normalcy.”

Netanyahu also clearly benefited from Trump’s ‘deal of the century’, which ostensibly demonstrated to Israelis that they can annex West Bank lands with the blessings of the world’s superpower, thereby dovetailing with Netanyahu’s election promises.

Here, by the way, Gantz stumbled. He knew a large majority of Israeli Jews were enthusiastic about Trump and his policies. A dove at heart, Gantz tried to persuade voters that he, like Netanyahu, would annex territories, but only “after consultation with the international community”. Too many potential Gantz supporters got the message: when the smoke clears, he won’t really annex because the international community and the Arab world have made it clear that they vigorously oppose annexation.

By the same token, Netanyahu repeatedly hammered away with the argument that without the Joint Arab List, Gantz would have no coalition and that the Arab MKs are a traitorous fifth column. Gantz denied unconvincingly that he would need the support of Arab MKs. Yet he could never point to alternative support from, say, another right-religious list besides Liberman’s. All those right-religious lists constantly pledged allegiance to Netanyahu’s “bloc”. Anti-Arab voters did the math.

Q. Let’s assume the atmosphere will continue to be one of uncertainty, due either to months of problematic coalition talks or a fourth round or one followed by the other. What harsh realities does the country face?

A. Besides the obvious cumulative and demoralizing dangers to the rule of law and to a healthy civil society? Beyond them, Israel faces a series of unresolved strategic issues that will seemingly remain unresolvable.

Take Iran’s threat from the north and its mismanaged nuclear threat for starters. The Palestinian issue--both the Trump plan and the Hamas/Gaza challenge—is once again gaining urgency and centrality. The economy has been functioning for a year without an approved budget, and virtually all national institutions are suffering as a consequence, beginning with the near-total absence of Knesset legislation and supervision. And last but by far not least, more than ten years of Netanyahu’s policies have brought about the growing alienation of the American Jewish mainstream, Israel’s key strategic ally.

Don’t be surprised if, one of these failed elections, something very central to Israel’s overall well-being “gives”.