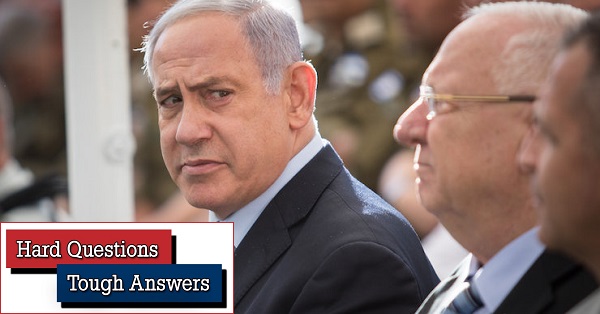 A. Based on near-final results of vote-counting, that is the picture. Likud (31 mandates) and Blue-White (32) are neck and neck. Netanyahu cannot form a right-religious coalition, falling well short at 55 mandates. By the same token, Blue-White’s Gantz cannot form a left-center coalition, even when the politically problematic Joint Arab List’s 13 mandates are counted to give him 56. Strategically located between the two is Avigdor Liberman’s Yisrael Beitenu party with nine mandates. Liberman’s platform demands a secular liberal unity government with Blue-White and Likud.

(Additional tentative results: the two ultra-Orthodox parties, Shas and Torah Judaism, together have 17 mandates, a very strong outcome; the far-right Yamina has 7, a weak showing; Labor-Gesher has 6 and Meretz-Democratic 5, meaning they both survived the four-mandate threshold, but barely; Jewish Power (Kahanist-fascist) failed to pass that threshold.)

This outcome confronts the Israeli public with a bewildering spectrum of options, from a third round of elections to a reluctant unity government. Against the backdrop of a volatile Persian Gulf, a promised Trump “deal of the century” and looming indictments against PM Netanyahu, the delays and controversies of the months ahead could have serious strategic implications for Israel.

Meanwhile, the big news is that Likud has been distanced from any chance of forming a narrow right-wing government. And Blue-White is almost certainly the biggest party, though by a slim margin of votes and perhaps one mandate. This may look like the beginning of the end of the Netanyahu era, but don’t count him out. He did not win these elections, but he is still the most vicious and skilled campaigner. And the most highly motivated: he wants to stay out of jail.

What Netanyahu apparently will no longer be able to do with abandon is openly flout and undermine both the rule of law and Israel’s gatekeeper institutions. That is good news. The large voter turnout--nearly 70 percent--is also good news because it signals that Israelis have not lost faith in their democratic system. And the Joint Arab List’s readiness to engage in mainstream politicking offers hope for that system.

Q. Let’s start with the spectrum of options. A third round of Knesset elections?

A. Very unlikely. The politicians understand that the degree of public demoralization this would cause would severely cripple Israeli democracy and ultimately hurt them. President Rivlin understands this and has vowed not to permit a third round. Besides, after two deadlocked election results--April and September--a similar outcome is in any case highly likely, so why bother.

Q. Can’t Likud try to coopt a small center-left party like Labor-Gesher, which apparently has six mandates? That would push the right over the 61 mandate threshold for a majority coalition. Can’t Blue-White abandon some of its principles and do a deal with the 17-or-so ultra-Orthodox mandates, or alternatively even with the 13-mandate strong Joint Arab List?

A. These questions hint at the kind of horse-trading gambits we can expect in the weeks and possibly months ahead. None of these narrow-majority options is likely. Not all of Labor-Gesher’s six members of Knesset--perhaps none--would agree to join a Netanyahu-led narrow coalition. Blue-White, like Liberman, is pledged to a “liberal secular” coalition, which means that in order to join them the ultra-Orthodox Haredim would have to abandon their most sacred extremist-religious principles. Blue-White is also pledged not to serve in a broad coalition led by Netanyahu.

Lest we forget, roughly half of Blue-White is Yair Lapid’s Yesh Atid faction, which demands Haredi compliance with compulsory service and secular education laws that the ultra-Orthodox reject outright. Nor could Blue-White offer the Joint Arab List actual portfolios or even Knesset committee chairmanships in return for its support without alienating some of Blue-White’s own right-wingers.

Q. Returning to the fallback position of a Likud-Blue-White-Liberman coalition, how is that effort likely to play out? On the face of it, this suggests a stable centrist coalition? What are the obstacles?

A. The biggest obstacle is liable to be Netanyahu himself. He will insist on being prime minister, if only to strengthen his chances of evading or postponing indictment and a trial. But even if Blue-White backs off and agrees (perhaps with a rotation formula) and Netanyahu gets his way, he won’t command a Knesset majority to provide him immunity. To strengthen his bargaining position he will first try to coopt Labor-Gesher and/or to tempt Liberman or the Blue-White right-wingers, all former Likudniks, into returning to the fold in return for politically lucrative portfolios.

We also may not have heard the last of Netanyahu’s allegations of Arab voter fraud. Arab ballot stuffing last April was one of his more disgusting and unethical rallying cries in these elections. There proved to be no substance to these allegations, yet Netanyahu repeated them in recent weeks in a desperate effort to rally his “base” and enlarge the Likud vote.

In the end this failed for the Likud and, ironically, helped the Joint Arab list get out the vote in protest. Moreover, the current elections produced no immediate fraud allegations. But Netanyahu could still fall back on this or similar accusations, if only to gain time and slow the coalition-forming process.

Meanwhile, with Netanyahu still allied with the Haredim, Blue-White’s Gantz and Liberman are united in demanding a centrist coalition in which Likud does not have a majority. Gantz will now try to persuade the Likud’s secondary leadership tier--MKs like Gideon Saar and Yisrael Katz--to depose Netanyahu and abandon him to his judicial fate in return for senior coalition positions. By the day after elections, too, Gantz was talking to the Joint Arab List as well, if only to ensure its passive support.

Q. So ahead of us are weeks and months of horse-trading. You argue that Netanyahu was the most skilled campaigner. How did Gantz’s campaign deal with him?

A. Blue-White ran a uniquely laid-back and almost passive and whispered campaign--the exact opposite of Netanyahu. Gantz and his fellow generals presented the public with quiet, low-key statements of fact about Netanyahu and an image of toughness on security issues. At times during the past three months, learned commentators accused them of not campaigning at all. Behind Blue-White’s approach was apparently the understanding that this contrary image was what the public longed for. It looks like they were right.

The only “tweak” of the last two weeks emanating from Gantz was the promise that a Blue-White-led coalition would be “secular”--evidently a response to the drift of a mandate or two toward Liberman. Notably, too, one of Blue-White’s generals, Gabi Ashkenazi, emerged in these elections as a particularly charismatic and attractive personality. Gantz, at the last minute, cleverly announced that in his coalition Ashkenazi would be minister of defense, meaning “number two”.

Considering that Blue-White did not exist a year ago and that many observers repeatedly predicted that it would fragment and fall apart, its election achievement is remarkable. Still, Benny Gantz now enters complex coalition negotiations with little back-room political experience to fall back on.

Q. So what was this election about?

A. On one important level, it was about Netanyahu, yes or no. On another, thanks to Liberman’s decision to prevent a right-religious coalition following April’s election and to run on a “liberal, secular” platform, this election seemingly pitted liberal “Israeli” Israel against illiberal ultra-nationalist, Orthodox and ultra-Orthodox “Jewish” Israel. That, at least, is one compelling way of looking at the outcome.

Netanyahu’s desperate “global leadership” pose did not help him. At the last minute, President Trump contributed negatively by signaling that he could abandon Netanyahu on the Iran issue, while President Putin contributed by publicly (and deliberately?) keeping Netanyahu waiting for three hours when they met last week.

Netanyahu’s pending indictments were apparently not a major factor in attempts to erode his right-nationalist-religious base. His supporters either don’t care or don’t believe the accusations. Besides, in this era of fake news and alternative facts, they mistrust both the judiciary and the media.

Nor was security a factor, if only because a major flareup with Iran’s proxies or with Hamas was avoided in recent months. Blue-White’s three ex-chiefs of staff could not fault Netanyahu’s management of the security situation and Netanyahu could not undermine their combined credibility. Netanyahu’s “dramatic” recent revelations regarding Iranian nuclear facilities, a defense treaty with the US and annexing the Jordan Valley were understood by most of the public as election gimmicks. The rockets fired from Gaza at Ashdod a week or so ago while Netanyahu was speaking there may have cost him a mandate.

Lastly, the Palestinian issue was barely on the agenda for these elections. Other than Meretz-Democratic, no one talked about it. Netanyahu’s bluster about annexing territory and settlements and settling scores with Hamas generated protests from Ramallah and Gaza but did not promote an Israeli election debate.

Q. Who are the key actors to keep an eye on in the weeks ahead?

A. Let’s start with President Rivlin. He has publicly expressed regret that he allowed Netanyahu to maneuver Israel into a repeat election. So he will now be vigilant on this issue. Rivlin’s duty is to consult with all factions after final results are in, then call upon the politician with the best chance at success to form a coalition. Here he may get creative. Or he may feel obliged by protocol to allow Netanyahu to have a go at coalition-forming if he gets the most recommendations from the newly-elected parties. After that fails (45 days are allotted) he could turn to Gantz assuming he still heads the biggest party: another 45 days.

Or vice-versa. Either Gantz or Netanyahu could try to preempt with some sort of surprise formula for a coalition: Gantz with the united Arab list and/or Liberman; Netanyahu with Labor-Gesher and/or Liberman. Coalition portfolios will be sold to the highest bidder. Election promises will be abandoned, recanted or denied freely.

But these are low probability scenarios. More likely, at some early stage Rivlin could abandon protocol and demand a heart-to-heart with Netanyahu and Gantz. Liberman has advocated such a step. A lot could indeed depend on Liberman, a big winner in these elections but a problematic politician who will seek the best deal for . . . himself!

The calendar is also a key factor. Soldiers’ and diplomats’ votes have yet to be counted and could move the outcome by a mandate. Then too, a month of Jewish holidays that commences at the end of September will slow everything down. The calendar of Netanyahu’s legal problems, which restarts with a key hearing on October 2-3 and could then continue with indictments, also must be factored in. Then too, President Trump has promised any day now to deliver his “deal of the century’ (don’t hold your breath!), which could affect the substance of coalition talks.