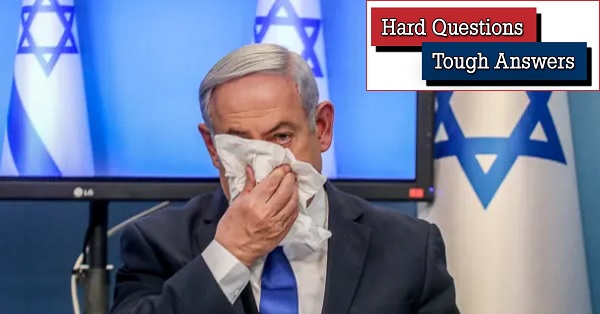 Q. Israel is dealing with two simultaneous crises: battling the corona virus and trying for the third time in a year to form a new government. How do the two crises interact?

A. Caretaker Prime Minister Netanyahu is trying to leverage the corona crisis to form some sort of unity government with Blue White, under his ongoing leadership. Over the past week he has crowned a series of public presentations about dealing with the virus with calls for Blue White leaders to join his existing government on an emergency basis, as ministers-without-portfolio, along the lines followed in May 1967 during the countdown to the Six-Day War.

Back then, opposition leaders Menachem Begin and Yosef Sapir joined Levi Eshkol’s government as ministers-without-portfolio (and Moshe Dayan joined as minister of defense). The enemy was the Arab world. Eshkol’s government held a majority of Knesset seats even before the crisis. The issue was public confidence as war approached.

Today, in sharp contrast, Netanyahu does not hold a majority. Indeed, on Monday Blue-White, supported by 61 mandates, got the nod from President Rivlin to try to form a coalition. Nor is the issue Netanyahu’s handling of the corona crisis. Israeli governments have weathered worse crises, like the Yom Kippur War in 1973, without inviting in the political opposition.

It's difficult to avoid the suspicion that Netanyahu simply wants to leverage the corona crisis to stay in power and avoid prosecution. The sycophantic praise for his leadership from his ill-suited health and education ministers raises eyebrows. Then too, based on scientific projections that the corona crisis will seriously worsen, Netanyahu may seek little more than to be able to “spread the blame” for extreme economic disruption with Blue-White.

Blue-White for its part continues to insist that the indicted Netanyahu step aside, even as the virus crisis has caused postponement of the commencement of his trial on corruption charges from mid-March to May. Blue-White leader Benny Gantz aspires to form a minority government with external support from the 15 MKs from the Joint Arab List, then replace Knesset Speaker Yuli Edelstein from the Likud and pass a law preventing an indicted MK from serving as prime minister. Gantz’s chances of success appear doubtful because his minority government is not likely to hold and his Arab List support is tenuous. On the other hand, he may be able to leverage a brief numerical advantage to negotiate a more balanced unity government in which Netanyahu’s premiership is curtailed, say, to six months before rotation.

Gantz’s approach is nourished by Blue-White’s total lack of trust in anything Netanyahu commits to. That’s why the party was formed in the first place. That is what the past year of repeated failed coalition negotiations with Netanyahu has taught it.

All this is informed speculation. We are on much more solid ground talking about the substantive and basic societal and governmental issues that the confluence of the two crises has brought to the surface of Israeli life.

Q. For example? What are some of those basic issues that have emerged?

A. Netanyahu likes to take credit for handling the corona crisis capably. No doubt he can project solid decision-making when the need arises. After 14 years as prime minister he knows how to wield the levers of government management. But the virus crisis underlines some unpleasant facts about his record.

For one, the national health system suffers from years of underfunding. Israel desperately lacks corona test kits and hospital beds. Its minister of health, Yaakov Litzman, has no medical background and is under investigation for corruption. And the current state of emergency reveals a country that would be hard put to deal with a worse national crisis such as bombardment from Lebanon by Hezbollah with its arsenal of 200,000 Iran-supplied rockets and missiles.

The IDF is poised to begin providing vital services as the corona crisis worsens and the economy shuts down. It is the only institution capable of doing this--not the government.

Then too, Netanyahu has managed to call for a national unity government representing everyone but Israel’s Arab population, some 20 percent of all Israelis. This, in the face of remarkable Arab success in fielding a list of 15 MKs, and prominent Arab involvement in the health crisis: the sickest corona victim is an Arab and his primary doctor at a hospital in Tiberias is Arab.

Thus far, Gantz has managed to recruit and hold Joint Arab List political support despite the misgivings of his most hawkish potential coalition members. Netanyahu studiously ignores the Joint List and the Arab citizens it represents at this time of national crisis or, worse, treats them as traitors. Former Shin Bet head Yuval Diskin, who is not a politician, summed up the issue at stake on March 11 in Yedioth Aharonot: “. . . the struggle taking place these days is not about the legitimacy of the Joint List as a political partner for a vote or a government. This is a deeper struggle about the image of the state as a Zionist, Jewish and democratic Israel founded in accordance with the vision of the founding fathers. In such a state, the Joint List is also a legitimate and worthy partner for dealing with the issues on our agenda.”

Finally, in its effort to control virus spread among a naturally unruly and free-wheeling Israeli public (as anyone driving on our roads can attest to), Netanyahu’s caretaker government with its legitimacy and credibility problems is embarking on measures that are risky even for a healthy and fully functioning democracy: sharply restricting gatherings, and using invasive cyber monitoring tools like cellphone tracking to keep an eye on people ostensibly confined to quarantine and to locate people who have come in contact with corona sufferers and should be quarantined.

Q. Speaking of Arabs and democracy, how are Israel’s neighbors doing with the virus?

A. To a large extent, they are following the lead of the Israeli health system in shutting down international flights, closing schools, quarantining, etc. Israeli health officials, via the IDF, are working closely with Palestinian officials in the West Bank and even the Hamas-ruled Gaza Strip, which thus far claims to be virus-free but is taking precautions. Hamas, like the West Bank, is accepting medicines and equipment from Israel. Hamas even delivers its corona testing kits to Israel for analysis since Gaza lacks the necessary laboratory capabilities, and it is holding its rocket-fire and preventing angry fence demonstrations. West Bank doctors are training on corona detection and care at an Israeli hospital. Israel still allows 120,000 West Bank laborers to commute to work in Israel daily, in a gesture aimed at sustaining the West Bank economy despite corona risks.

Like the Gaza Strip, Syria and Yemen also claim to be virus-free, but these are war-torn countries where governance is fragile at best. Lebanon, though, is an interesting case. Like Israel, it is engulfed in a governmental crisis. Unlike Israel, its crisis is also economic. Even worse, under pressure from Hezbollah, an Iranian proxy with a strong political presence in the Land of the Cedars, flights from corona-blighted Iran were still allowed to land in Beirut until very recently, thereby definitively importing the virus.

There are larger issues at stake in the Arab world, too. Like Iran with its heavy toll of corona victims, Arab rulers’ primary concern appears to be non-medical: maintaining political and economic control. Note that the Arab League has done and said nothing about the virus. At a time like this, dictatorial and weak regimes worry first and foremost about themselves. To what extent corrupt rulers in democratic countries who insist on flouting the rule of law also fit this pattern is an issue of interest: Netanyahu? Trump?

Returning to Gaza, if and when the virus emerges there, the situation could be catastrophic for two million Gazans living in unprecedented conditions of crowding and poor hygiene. Will Israel and Egypt be able to isolate the Strip while helping to attend to its corona victims? One way or another, the situations in Gaza and the West Bank merely underline how codependent Israel and Palestine have become.

Q. Codependent? Then what about the much-ballyhooed initiative, emanating from the Trump administration, for Israel to annex parts of the West Bank?

A. Annexation was on centrist and right-wing candidates’ agenda until Israel’s third round of elections on March 2. Now, annexation is no longer mentioned. One obvious reason is corona: helping the Palestinian Authority to curb and treat the pandemic is currently far more important than annexing territory that the still-valid Oslo accords assign to Palestinians. Another reason is the lack of a functioning Israeli government with a Knesset majority: that means annexation is not likely to be an issue for weeks and probably months. Note that Netanyahu, while heading a caretaker government in recent months, sufficed with bluster about annexation--but no genuine action.

Still, let’s suppose for the sake of argument that a unity government emerges and it is headed by Netanyahu, who has pledged to annex (depending which electoral pledge you listened to) the Jordan Valley and/or every single settlement or simply one settlement, Maaleh Adumim just east of Jerusalem. In such a situation, three things are likely to happen.

First, Blue-White leader Gantz, backed by most of his party, is likely to stand by his election pledge to annex only “in coordination with the international community”. Since the entire international community except the Trump administration is opposed to unilateral annexation by Israel, this could give Gantz a veto over such a move by Netanyahu in a unity government.

Second, right wing ministers in the unity government are likely to continue to take unilateral steps toward de facto annexation, more or less in accord with the Trump Plan map. We have witnessed such steps in recent months under Netanyahu’s caretaker government, spearheaded by far-right Yamina’s defense and transportation ministers: initiatives to build new neighborhoods that isolate Arab East Jerusalem from the West Bank, and to pave new bypass roads for settlements.

Third, the Arab world will weigh in. Jordan is likely to threaten to sever its peace-treaty-bound relations with Israel. Egypt could follow suit. Saudi Arabia and the UAE could pressure Israel with threats of reduced under-the-table ties. The threat of serious unrest could emerge in the West Bank and Gaza.

Finally, a lot would depend on the Trump administration. We have seen how Jared Kushner, after launching the ‘deal of the century’ with its provisions for Israeli annexation, backed down under Arab pressure. In an abrupt reversal, he insisted that such a move had to await the emergence of a stable Israeli government and the completion of ill-defined “measurements” and surveying to define just what he meant in referring, for example, to the Jordan Valley. Then there is the question whether Trump would want a controversial and even explosive annexation by Netanyahu to become an issue in coming US presidential elections.

And of course, in the months to come a lot will depend on the corona virus--in Israel, in the West Bank and in the US.

A. The weeks ahead will witness escalated corona dangers, attempts to reach some sort of agreement on at least a temporary unity government to deal with them, and little or no talk or action regarding annexation.