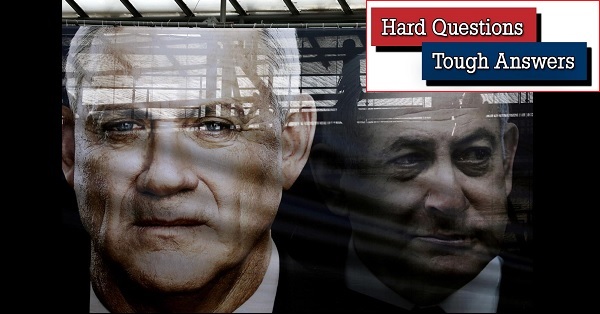 A. The talks are reportedly stuck over two very basic issues that bear on Israel’s future as a democratic and Jewish state. The issues concern the rule of law and the future of Israeli-Palestinian relations.

The Likud demands veto rights in the committee that approves appointment of judges--a committee in which existing judges and the legal establishment play a dominant role. It also reportedly wants Blue-White to exercise together with it a measure of control over television broadcasts. Blue-White, thankfully and at least so far, refuses on both counts.

The Likud also wants agreement to begin annexing West Bank territory in accordance with the Trump plan. Here Blue-White reportedly agrees to compromise on at least a symbolic annexation, for example the Etzion Bloc or Maaleh Adumim, but rejects wholesale annexation of some 30 percent of the territory and particularly the Jordan Valley. Extensive annexation would have far-reaching negative ramifications on relations with Jordan, not to mention the Palestinian Authority. It would also move Israel a lot further down the slippery slope toward apartheid-state status.

Blue-White leader Benny Gantz wants to finalize the dimensions of a compromise annexation now, as part of a coalition agreement. He does not want to give Netanyahu an excuse, say a year from now once corona has faded, to bring down the coalition and prevent rotation over the annexation issue.

Netanyahu, for his part, is under pressure from his settler supporters in the Likud and from the political right in general to guarantee annexation of all settlements within months, while the Trump-given window of opportunity is open. One far-right party in Netanyahu’s bloc or base, Yamina with six mandates, is threatening to push a host of reactionary legislative initiatives and an annexation law in the Knesset if Netanyahu does compromise with Gantz.

Gantz has until next Monday, April 13 at midnight, when 28 days expire, to form a government, albeit one led by Likud leader Netanyahu for its first 18 months in office. If Gantz fails, he can then ask President Rivlin for 14 more days. In view of the corona crisis and the Passover holiday, Rivlin is likely to accede to the request. If Gantz still can’t deliver, Netanyahu can then get the same mandate from Rivlin. Indeed, all told, a dithering Israeli political establishment has 10 more weeks to negotiate before a fourth consecutive round of elections is mandated.

Q. Israel’s corona casualty numbers are remarkably low for a population of nine million. The ‘curve’ is flattening. There is talk of relaxing restrictions on movement after the Passover holiday. What’s the explanation?

A. I would cite two primary factors for Israel’s relative success.

First, Israelis are used to wartime emergency conditions. Not surprisingly, the effort to combat corona is being framed in the public sphere as a ‘war’. Not coincidentally, the Israeli institutions best adapted to conditions of war are being increasingly deployed in the most problematic sector of the public, among the Haredim (ultra-Orthodox), who, also not coincidentally, don’t serve in the army. The IDF’s elite units are patrolling Haredi cities like Bnei Brak, bringing food to quarantined Haredim and arresting those who still try to congregate for prayer.

IDF Intelligence has deployed elite electronic and signals intelligence units to aid in the overall fight against corona. The Mossad is acquiring respirators and masks anywhere in the world it can find them. The Shin Bet is deploying its anti-terrorist cellphone-mapping techniques to spot people who may have been exposed to virus-carriers and to quarantine them.

Thanks at least in part to these efforts, the vast majority of the public is more or less obeying quarantine and closure instructions. The police are on high alert to keep people confined on Passover. Incidentally, the Arab sector’s low infection rate is attributed to the fact that it has avoided some Jewish (primarily Haredi) mistakes like huge gatherings for Purim a month ago and mikve use for women, where the virus spread exponentially during March. But Ramadan, which starts April 23, poses the same dangers of infection by crowding as the Jewish holidays.

Second, Israel is a physically small country with a robust and easily managed economy. Despite years of underfunding, its national health care system is still relatively good. So vital life-preserving equipment can easily be moved to where it’s needed, and industries can quickly be converted to manufacturing that equipment. The specter of New York Governor Cuomo begging hospitals inside his own state, not to mention other states and even China, to lend, sell or give him respirators is totally unknown here.

Accordingly, rates of infection are slowing--now doubling every 11 days, more slowly than most of the West. The death toll stands at just over 50. An easing of heavy restrictions on movement is expected sometime after Pesach. Lots of mistakes have been made, the disastrous minister of health won’t be replaced because of politics, and economic incentives and compensation are slow. But the crisis now appears manageable.

Q. All that military, Mossad and Shin Bet involvement in Israeli civilian life doesn’t worry you? Isn’t PM Netanyahu liable to become enamored of it even after the crisis is over?

A. Netanyahu is indeed notorious for his growing disdain for the rule of law. But I have faith in the security establishment’s respect for the rule of law and for society’s rules of the game. I don’t think Netanyahu can breach that respect the way he has tried to do, here and there successfully, with institutions like the State Controller and the Ministry of Justice.

It even appears (see above) that Blue White’s leader Benny Gantz is upholding the rule of law when he balks at Netanyahu’s efforts to frame a coalition agreement that allows the Likud to pack the courts with supporters of its demands to go easy on corruption, state control of the media and the like.

Q. Speaking of the military and corona, could the health situation in Gaza provide an opportunity for positive interaction?

A. Positive or negative, depending how flexible both Israel and Hamas are prepared to be. In this sense, the corona pandemic “war” may be eliding with an older war, that between Israel and Hamas in Gaza. Both sides fear a huge covid-19 explosion in the Strip with its crowding and poor sanitation. For Israelis, the infection rate in Bnei Brak, which is actually more crowded than Gaza in terms of people per square meter, is a warning about things to come in the Strip.

Gaza desperately needs equipment and expertise to slow its infection rate. Gaza Hamas leader Yihya Sinwar recently threatened that “if we need respirators, six million Israelis won’t breath”. The IDF is accustomed to this sort of bluster. Still, a truly desperate Hamas leadership that has run out of medical solutions could indeed, to distract and let off steam, start firing rockets and mortars at Israel and send tens of thousands of Gazans in need of medical treatment to mob the border fence.

Thus far, Israel has provided additional health aid and has transferred contributions from the international community. But if the level of Israeli involvement at the humanitarian level is to go up, Hamas will be asked to reciprocate in the only coin available. Israel wants Hamas to return two live Israelis (who have mental health problems and entered the Strip of their own volition) and the remains of two dead soldiers from the 2014 fighting. Since then, we have witnessed years of intermittent and failed negotiations over a humanitarian deal that repatriates all four in return for release of hundreds of Hamas prisoners from Israel’s jails (where corona now also threatens). We may soon witness a highly asymmetric but nevertheless worthwhile trade, finally made possible by the virus.

A. Corona will be overcome in, by international standards, good order. The economy will recover faster than many people fear. There may still be zigzags, but the country will manage even if people like your all-too-senior Q & A writer remain under lockdown at home for many more months.

The security establishment will do its job efficiently in helping defeat corona in this “war”, but will not become entrenched in Israeli civilian life. It will “return to barracks”. It respects the rules.

The state of Israeli civilian governance and rule of law does not inspire nearly as much confidence. The example of PM Orban in Hungary, where a loaded parliament just gave him unlimited one-man authority for an unlimited time-span, is an extreme instance that the entire democratic world and particularly the European Union should keep a worried eye on.

No, Israel is not going there. But Netanyahu’s behavior and coalition demands are nevertheless a cause for studied concern. This indicted prime minister will use every trick he knows, and then some, to avoid being convicted and to avoid leaving office.

Right now, Gantz’s chances of ousting him even 18 months from now do not look very promising. If there is still time and opportunity for Gantz’s plan B--to muster a Knesset majority and legislate against Netanyahu--he should abandon coalition negotiations and go the Knesset route.