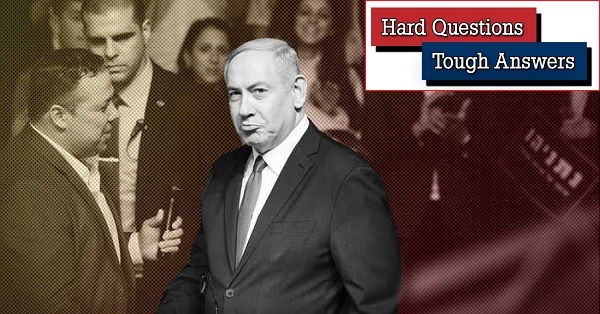 Q. Let’s start with politics. Is covid-19 involved in the ongoing stalemate in forming a governing coalition after a third straight election?

A. If anything, the pandemic has lent a sense of urgency and mission to Benny Gantz’s bizarre effort to form an emergency or unity government headed by his rival, interim Prime Minister Netanyahu. And yet as of the time of writing on Monday April 13, that effort was failing like its antecedents. Gantz’s 28-day mandate for the Blue-White party runs out on April 13 and President Rivlin does not intend to extend it.

Only a few days ago, Gantz and Netanyahu had reached a coalition agreement. Then Netanyahu backed down on his sole significant concession: agreeing not to seek a Likud veto on decisions of the state panel that selects judges. True, not changing the status quo can hardly be considered a concession. But Netanyahu’s U-turn on the issue appears to reflect his desperation to mold and manipulate the judicial system so as to improve his chances to beat the corruption charges pending against him.

In other words, his own political survival remains more important to Netanyahu than forming a government that could better fight the corona virus. Netanyahu is apparently no longer even prepared--also as previously agreed with Gantz--to commit, through legislation, to rotate the premiership in 18 months. Barring a last minute Gantz-Netanyahu agreement, Rivlin was poised at midnight Monday to declare that neither Gantz nor Netanyahu has the votes to succeed, and to give the Knesset a final 21 days to form a coalition, after which--assuming it fails--the countdown will begin for a fourth round of elections in the fall or winter.

In view of Blue-White’s fragmentation and its failure at coalition negotiations, and Netanyahu’s relative success (by international standards, and despite many mishaps) at battling the virus, the Likud leader has to be considered the frontrunner in a fourth round. And he knows it, which is why he apparently prefers that course.

Q. Are there no other options for the next three weeks?

A. Gantz and Netanyahu can continue negotiating. Netanyahu can try to poach two members of Knesset from the center and, with 61 votes, extend the current right-religious coalition. Gantz can try to regroup the fragmented Blue-White party and his original highly disparate 61-vote majority and legislate in the Knesset against the possibility of an indicted politician forming a government or serving as prime minister. Finally, the High Court of Justice could respond to one of many petitions and rule against Netanyahu serving.

None of these scenarios appears promising. This tired and tiring checklist of options has not changed for a month. At the end of the day, it’s about Netanyahu, his corruption and his ego. It’s about the ultra-nationalist-messianic tide in Israeli politics (Boaz Bismuth, editor of the Adelson-owned pro-Netanyahu Israel Hayom, last week: “To me and to Israel Hayom, Netanyahu is ideology. To his opponents, this is pathology. It’s time to put an end to this”). It’s not about corona. Note that the evening news on three TV channels usually updates a dispirited public on these coalition shenanigans only after 40 minutes of corona updates.

The odds of a fourth round of elections are about to improve. Meanwhile, Gantz could remain Knesset speaker and Blue-White could continue to hold key committee chairmanships. This sort of political division between the legislative and the executive branches is not common in a parliamentary system like Israel’s (unlike, say, a Democratic House of Representatives and a Republican president, as in the US currently). Indeed, in Israel it is without precedent.

Whether that proves constructive or obstructionist remains to be seen. One positive outcome, however temporary, could be Netanyahu’s inability, as a caretaker prime minister without majority support, to annex West Bank territories.

Q. Enough with politics. Where are the effects of living with the virus actually felt in Israeli society?

A. The most obvious effect concerns public attitudes toward Israel’s one million Haredim (ultra-Orthodox Jews). Their high rate of COVID-19 infection in Bnei Brak and certain neighborhoods of Jerusalem, about one-third of the national total, is understood to be prolonging corona’s economic damage by delaying the readiness of the entire country to begin ending quarantine measures: reopening the commercial sector, and returning children to school and the unemployed and furloughed (25 percent of salaried Israelis) to work.

The Haredim are in a low socio-economic bracket. Their families tend to be large and multi-generational and their neighborhoods are extremely crowded. Such characteristics are understood to explain a high corona rate among, say, some lower-income urban American blacks and Latinos. But that’s where the comparison ends. After all Haredim, like all Israelis, have comprehensive health insurance and no particularly high rate of poor general health.

Rather, the factor that has angered a large portion of the Israeli public is the presence in Haredi communities of extremist rabbinical leaders who have insisted on maintaining prayer congregations despite government prohibitions on gathering in crowds. Then too, most Haredim deny themselves modern means of communication--television, cell phones--that could inform them of the dos and don’ts of the corona era. Note that, thanks to Netanyahu’s right-religious coalition bias, the minister of health is Haredi; his own pro-Haredi bias merely prolonged the corona crisis until he himself fell ill from the virus (after praying in a congregation in violation of his own rules) and was obliged to stay home and get a wi-fi hookup.

Haredi rejection of army service and a core education curriculum and relegation of women to secondary status alienated them from the public-at-large prior to corona. Now, it is their willful fanatic ignorance of a pandemic whose consequences they have inflicted on the public that is truly angering it. The response, much delayed due to Haredi political pressures, has been an army-administered quarantine and virus-testing in Haredi neighborhoods.

The IDF appears to be doing this with a sensitive touch. And at least some Haredim in Bnei Brak near Tel Aviv and Mea Shearim in Jerusalem are proving grateful to the army they don’t serve in and to a state many of them barely recognize but which is protecting them. This has led some social commentators to speculate that what began badly for the Haredi image in Israeli society might actually end well in terms of Haredi integration into the mainstream. Would it were so . . .

Q. And restrictions on the elderly in assisted-living centers?

A. Sadly, like in the United States, England and elsewhere, in Israel too the death rate among the elderly congregating in assisted-living facilities is high. Another third of the total. This represents a major public health failure, not unlike mis-managed screening of arrivals from abroad.

One of the irritating phenomena spawned by the vulnerability of the elderly to COVID-19 and the failure to protect some of those isolated in tiny apartments in assisted-living centers is a kind of paternalistic attitude on the part of politicians and health officials. “We have to protect our grandparents” is well-meaning and sounds altruistic. But some of us grandparents who are fit, are not in assisted living and are tranquilly self-isolating find it a bit rankling. Sorry.

Q. What about restrictions on civil and political rights. Are you certain they are temporary?

A. Israel is one of several democracies that have pioneered digital surveillance to warn possible corona sufferers and enforce self-isolation on others. In Israel the technique was perfected two decades ago, for use by the Shabak (also known as Shin Bet, the Internal Security Service) to monitor potential terrorists and to identify and trace the movements of collaborators of suicide bombers.

Are Israelis concerned that, after corona, the Shabak will keep spying on them and the army will continue to patrol troublesome urban neighborhoods? Here is American whistleblower Edward Snowden, the man who exposed the National Security Agency’s wholesale digital data-gathering in the US, pontificating last week in his Moscow refuge to Yedioth Aharonot’s Ronen Bergman: “It really surprised me that the Israeli public doesn’t completely understand how dangerous a data pool is in the hands of the Shabak. . . . What Netanyahu is doing today in exploiting the Shabak’s data is more dangerous than the corona virus. . . . What we see today is the building of an infrastructure for suppressing human rights on a massive scale.”

The simple answer to Snowden is that Israelis are not particularly concerned. They are confident the Shabak and the IDF will happily return to dealing with genuine security threats the moment they can and that the current invasion of their privacy by Shabak contact-tracing is tolerable, necessary and controllable. Note that Blue-White’s first act upon taking control of the Knesset was to establish a High Court-mandated corona contact-tracing monitoring committee.

The only Israelis who complain about Shabak surveillance are extremist “hill youth” settlers who attack Palestinians and pro-terrorist Palestinians who spy for Iran. Meanwhile the Shabak takes credit for saving hundreds of Israelis from corona infection.

The threat to Israeli democracy and human rights comes from Netanyahu and his right-messianic supporters. Not the Shabak. Not the IDF.

Q. What about the Palestinians and corona?

A. Palestinian citizens of Israel have a low rate of infection. They are obeying the social distancing rules. Ramadan, beginning April 23, will test their capacity to avoid gathering in crowds, whether for prayer or for breaking the daily fast. If they fail and a heavy police or army presence is called for to enforce self-isolation rules, we can only hope that the interaction will prove as tranquil as between the IDF and the Haredim.

The West Bank had by Sunday night April 12 registered a low 278 corona-infected Palestinians and one deceased. Self-isolation appears to be effective there too. Notably, 73 percent of the infected in the West Bank are day laborers who until recently commuted to Israel and who brought the virus back with them. If angry Palestinian Authority media outlets accuse Israel unfairly of deliberately inflicting corona on the West Bank, this is how that conspiracy theory originated. Some 20,000 Palestinian construction workers remain in Israel. They can’t go home because the PA won’t let them in.

Meanwhile, the Gaza Strip reports a very low rate of infection: 13 ill, nine already recovered. But Gaza lacks the testing equipment necessary to obtain accurate statistics. It also lacks breathing devices. All this is being negotiated with Israel, which already supplies the West Bank. In the case of Gaza, there are complicating factors: Hamas won’t negotiate directly with Israel; it wants Hamas prisoners released by Israel before they contract the disease in crowded prisons; Israel wants Hamas to return two live Israelis and the remains of two IDF soldiers.

Who said it was easy to separate Israel from Palestine?