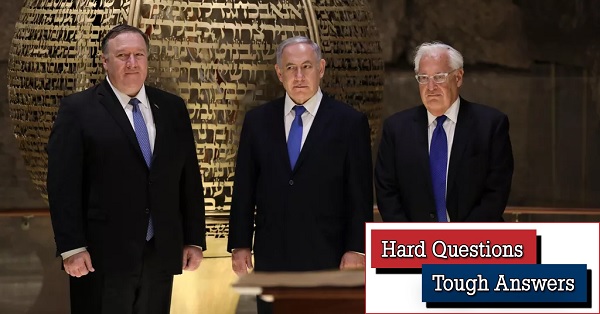 Q. Attorney General Avichai Mendelblit’s decision to indict the prime minister on corruption charges is “an attempted coup”? Somebody has to “investigate the [police] investigators” who produced the corruption evidence? All the charges against him are a “conspiracy”? Where is Israel heading under PM Binyamin Netanyahu?

A. Unless the prime minister who leveled these accusations last Thursday night is stopped, Israel is headed toward a very bad place. Netanyahu wants to turn public opinion against the gatekeepers of the rule of law in Israel. Those gatekeepers are all his appointees. They are now pointing the finger at him and accusing him of bribery, breach of trust and fraud in three separate cases. The issues at stake are the validity of the indictments themselves, Netanyahu’s personal motives and fortunes, the future of the rule of law and democracy in Israel, and the country’s fortunes in the shadow of the current electoral impasse.

Q. Start with the indictments.

A. They encompass more than 60 pages. They detail, with endless examples, how Netanyahu’s (and his problematic spouse’s and son Yair’s) pathological fixation with luxury gifts and positive media coverage caused the prime minister to lie and bribe his way through his relationships with over-friendly millionaires both Israeli and foreign and with Israeli media moguls. Netanyahu is an intelligent man of many talents. It is amazing to contemplate how he found time to run the country, given his preoccupation with gifts and fawning media.

Q. How authentic is his reaction to the indictments, which were long coming and could not possibly have surprised him?

A. How authentic is US President Trump when he addresses the current impeachment hearings and states, “They tried to overthrow the presidency. This is a disgrace”? Netanyahu quite obviously apes Trump’s tactics and language because they seem to work. Then too, in Netanyahu’s case, we encounter a huge ego that identifies his personal well-being and fate with that of the state.

We also encounter a sense of victimhood characteristic of some veteran Revisionist Jabotinsky followers--prominent among them Netanyahu’s late father--who have never reconciled with the fact that for most of the past 40 years they have been running the country. How could a police chief and an attorney general he appointed, men of his own political persuasion, turn against Netanyahu? This must be treason!!

This meshes well with resentment toward the “elites” of the legal, media and security establishments that Netanyahu has long cultivated among the lower socio-economic classes of Israeli Jews who constitute his political “base”. On Sunday I confronted the owner of the corner mom-and-pop grocery store near my home, a news junky who in my view understands little of what he reads and hears but loves to argue the issues with me. I asked him what his immediate, gut reaction was upon listening to Netanyahu’s Thursday night speech. I was hoping against hope that he would say something like, “Accusing his own appointee, Mendelblit, of fomenting a coup? That’s too much even for me.”

Alas, the grocer’s instinctive response was, “Well, maybe somebody really should investigate the investigators”. Exasperated, I quoted to him columnist Nachum Barnea’s appeal to Netanyahu in Yedioth Aharonot: “Be a mensch: stop whining. Every time the leader of my country describes himself as a victim, I’m ashamed.”

Q. So Netanyahu can rally the Likud and his political base behind his drive to remain prime minister, thereby (he hopes) maintaining immunity from prosecution?

A. Here we encounter two distinct but interacting dynamics: legal and political. At the legal constitutional level, meaning in Israel’s case basic laws, new and unprecedented issues have arisen.

Can Netanyahu, under indictment, remain acting prime minister in a transition government? Can he run for office? Can he form yet another government if he wins a new election? How can he ask the Knesset for immunity when it is not functioning? What is the role of Attorney General Mendelblit here? The role of the High Court of Justice? Who should be making all these decisions: the legal gatekeepers who are already under attack by Netanyahu and his allies, or the public in an unprecedented third straight election?

The answers seem fairly obvious to adherents of constitutionality and the rule of law. Even beyond those institutions, common sense and basic moral values should months ago have dictated that Netanyahu resign and devote his energies to clearing his name. Indeed, the instant polls show a majority of Israelis believing Netanyahu should now resign.

But all these basic values have gone out the window of the PM’s residence on Balfour St. in Jerusalem. Legal experts calculate that, if Netanyahu fights the charges while in office, the entire process, including appeals, could take up to seven years. By then he’ll be 77 and can appeal for a presidential pardon based on his age.

Q. That’s the legal dynamic. And the political?

A. The indictments were handed down the day after expiration of the mandate to form a government that was held by Blue-White’s Benny Gantz. Not surprisingly in view of Israel’s prolonged electoral stalemate, Gantz failed. The country is now in the politically uncharted territory of a 21-day period where anyone who can produce 61 signatures can be charged by President Rivlin with forming a coalition during an additional 14 days.

Here the prospects are poor indeed. Now that Netanyahu is indicted, Blue-White will not even consider a national-unity rotation coalition led by him. Within the Likud Knesset faction, MK Gideon Saar has (alone!) courageously called on Netanyahu to resign. Saar wants an instant party primary to crown a new leader who might still join Blue-White in a coalition, thereby obviating a third round of elections.

At the time of writing, senior Likud figures like Knesset Speaker Yuli Edelstein and Internal Security Minister Gilad Erdan were less courageous. They remain silent, voicing support for neither Netanyahu nor Saar. Meanwhile, lower-level minister-demagogues who are the prime minister’s yes-men and -women--Miri Regev, Amir Ohana and Dudi Amsalem--are trying to whip up public support for Netanyahu. The latter has agreed to primaries, but only in six weeks, once new elections are a certainty and, he hopes, once the shock of his indictments has worn off and become old news, if not “fake news”. He plans to run in those primaries, win, and remain leader of the Likud.

To sum up, this is a constitutional, legal and moral crisis that Israeli state institutions will not easily survive. It may go on for a long time and become chronic. All because of one man.

It is time for President Rivlin to intervene actively and forcefully in a way we have not seen since President Yitzhak Navon took a stand regarding Israel’s responsibility for the September 1982 Sabra and Shatila massacre in Lebanon.

Q. Wow! But hold on! Before you’re done: last week Secretary of State Mike Pompeo recognized the legality of the West Bank settlements. Is this now irrelevant?

A. It’s certainly “old news” in Israel’s super-charged political and legal-constitutional environment. Nor is there even a whiff of an Israeli-Palestinian peace process to which Pompeo’s statement could be relevant. (The security establishment is currently focusing on the Gaza Strip, where it hopes to leverage Hamas’s recent lack of militancy into a long-term truce bolstered by heavy economic payoffs).

Still, US recognition of the settlements will almost certainly provide wind in the sails of those right-wing parties that, in the near-certain third round of elections anticipated early next year, will run on a platform of annexation of large portions of the West Bank. Annex the Jordan Valley? The Etzion Bloc? All the settlements and so-called “outposts”, including those surrounded by hundreds of thousands of Palestinians? All of Area C (60 percent of the territory)? Pompeo’s statement suggests a rich menu of possibilities that will move Israel and Palestine closer to one-state apartheid status and further alienate Israel’s vitally important neighbor, Jordan.

Pompeo’s declaration that the West Bank settlements are not illegal is characteristic of Trump administration policy-making in three ways. First, like Trump’s Golan and Jerusalem recognition statements, it has no validity in real life. Nothing changes on the ground. Like the “deal of the century” and the breakthrough with North Korea, it’s just words; there is no active policy. Second, this openly flouts international law and legality. And third, it further delegitimizes the US as a potential honest broker in disputes anywhere--especially in the Middle East.