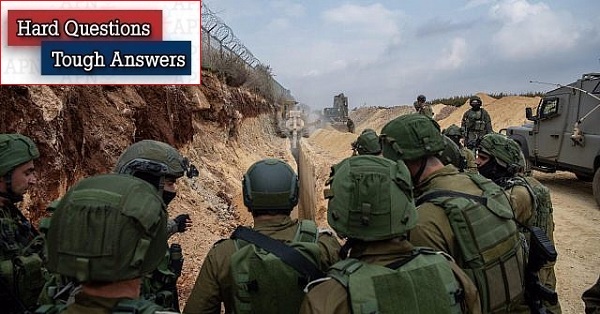 Q. As 2018 draws to a close (this is our last edition of the year), who is your candidate for the person or persons who most influenced events in the region over the past 12 months?

A. Donald Trump, perhaps with the inclusion of son-in-law Jared Kushner. Their Middle East policies were almost universally a disaster in 2018, with far-reaching ramifications for the region and the world.

Between the two of them, Trump and Kushner ended any hope of a viable peace process by moving the US embassy to Jerusalem and causing Palestinian leader Mahmoud Abbas to cut his ties with the administration. By withdrawing from the JCPOA Iran nuclear deal, they have seemingly guaranteed that a hostile Iran will pursue its hegemonic schemes in Iraq, Syria and Lebanon, including dangerous missile programs in all three countries that target Israel. By propping up Saudi Crown Prince Mohammed bin Salman (MbS) even after the brutal Khashoggi murder in Istanbul, they are ensuring that a US-backed Saudi Arabia will spread more mayhem: in Yemen, in Qatar, in Lebanon and who knows where else.

Only in Syria has the administration done relatively little harm over the past year. But little good either. And all that could change in the event of a clash between US troops and the real Syria players--Iran, Turkey and Russia--whose entry into the Syrian arena was facilitated earlier by first the Obama and then the Trump administrations.

Q. Hutzpah of the year award: Jared Kushner speaking to the PLO's Saeb Erekat in late 2017, as quoted by Erekat in Doha a few days ago.

I tell him ‘Jared, the president is supposed to sign the waiver not to move the embassy.’

I said ‘what do you mean we’re not going to sign? The president promised us in the White House that he would not take any step that may preempt or pre-judge Jerusalem, not before negotiations.’

He said ‘it’s our business and we will conduct our policies according to our interests.’

I told him ‘look: if you do this, you will have disqualified yourself from any role in the peace process.’

He replied: ‘Don’t threaten me.’

I said ‘read my lips: you will have disqualified yourself from any role in the peace process.’

He said ‘you don’t know the changes that are happening around you in the Arab world.’

‘DON’T BE SARCASTIC,’ he shouted.

I said ‘I’m not being sarcastic. What do you mean by changes? Do you think Arab countries will open embassies in Tel Aviv and accept Jerusalem, with the Al-Aqsa mosque, as Israel’s capital? To them Jerusalem is a red line — all of them! Saudis, Qataris, Egyptians, Jordanians, Bahrainis. So what are you talking about?’

He said ‘this is our business, our policies.’

I said ‘if you do this, you will bring Israelis and Palestinians to brink of disaster.’

Q. Is Saudi Crown Prince MbS the region's bumbler of the year?

A. Without a doubt. We already noted his fiascos with Khashoggi and in Yemen and Qatar. And he is not finished, either. Lest we forget, at the domestic Saudi level he has also done major damage to the economy and to human rights.

Q. And on the positive side? Any responsible adults around?

A. IDF Chief of Staff Gadi Eizenkot is my candidate for Israel's responsible adult of 2018. He countered Hamas in Gaza and Iran and its proxies in Syria, without escalating conflicts despite dealing heavy blows, particularly to Iran. He maintained close security cooperation with the PLO in the West Bank, without constraining Israel's freedom of response and, yet again, without risking escalation into an intifada. He stood up to ultra-nationalist ministers like Naftali Bennet and his own minister, Avigdor Liberman, who consistently advocated risky, counter-productive operations. He campaigned aggressively to prioritize Hezbollah and its tunnels over Hamas, recognizing that the most serious threat is from the north. Throughout, he stayed in the good graces of PM Netanyahu. Second place goes to Nadav Argaman, head of the General Security Service. The GSS ("Shin Bet") thwarted nearly 500 acts of Palestinian terror in 2018. It maintained close security relations with the West Bank-based Palestinian Authority. True, it missed here and there—witness the lethal Palestinian attacks of recent days in the Ramallah area. And yes, it employs extremely intrusive methods, particularly in the cyber sphere. And over the past year it was involved in a few nasty incidents where visitors were interrogated excessively at Ben Gurion Airport. Still, all in all it stays out of Israeli politics and, more than any other body, allows us to live our lives quietly.

Q. Survivor of the year?

A. That award goes hands down to Syria's Bashar Assad. Three years ago, he was written off by most of the region's leaders. He was rescued by Iran and Russia because he was useful to them in advancing their own hegemonic aims in Syria. True, they could probably still dispense with Bashar's services if they wanted to, but they don’t. He remains useful while he slowly expands his regime's grip on power throughout more and more of Syria's territory. Sworn enemies like Erdogan of Turkey and MbS of Saudi Arabia are beginning to hedge their bets as they come to terms with Bashar's staying power. Then too, he is once again a "player" in neighboring Lebanon, a perennial almost-failed state.

Q. Sleeper of the year?

A. Keep your eyes on Mohammed Dahlan. At age 60 and in his eighth year of exile from the West Bank, Dahlan awaits the day when arch-rival Mahmoud Abbas departs the scene and the active succession scramble begins. Dahlan has put together a sizeable war chest in the Emirates and in Egypt. He has followers in Gaza (where he was born and where he served Yasser Arafat as head of security), the West Bank, and among Israeli political and security circles.

Dahlan has adopted an interesting stance regarding the two-state solution. He recently told "Russia Today" that an independent Palestinian state is no longer in the cards: "The US won't agree and Israel is opposed" . . . . "The 'deal of the century' is a disaster". Accordingly, "We have to start adopting the idea of one state for the two peoples and demand full rights for the Palestinians. . . . The Palestinians will manage their lives without dependency on Israel". Here Dahlan is staking out a unique position that might appeal to potential backers on the Israeli political right, where in the past he has cultivated security and even business connections.

Note that Dahlan's brief and unique policy pronouncement was delivered to the world by Russian state television.

Q. No special title for Netanyahu this year? Next year?

A. Until further notice, Netanyahu remains undisputed leader of Israel's ultra-right-religious political mainstream. That notice may arrive in the course of 2019 in the form of one or more indictments. Yet even if indicted, Netanyahu may run for reelection during the coming year.

I would hesitate to wager on his demise or the demise of his policies during 2019.

Q. Dark horse candidate of the year? No one to challenge Netanyahu?

A. Former IDF Chief of Staff Benny Gantz is a very prominent "non-candidate" who has in recent months positioned himself at the political center, yet without forming a party or presenting a platform. Because so many Israelis crave a viable challenger to Netanyahu, Gantz's imaginary party scores second in the polls to the Likud, ahead of others in the center like Labor and Yesh Atid.

By not formally entering the political arena, Gantz has evaded the kind of political infighting and name calling that could bring his candidacy down to earth. After all, he has no political experience whatsoever and even his military record--commanding the IDF in an unproductive two-month war with Hamas in mid-2014--can be disparaged once the gloves are off.

Gantz as an "idea" appears to be a success. Once he is a candidate, I doubt he'll be worth more than a handful of mandates.