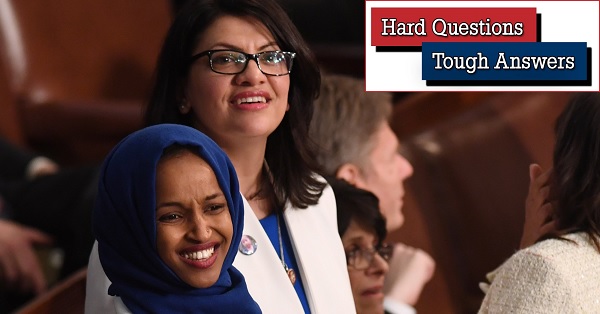 Q. Members of Congress Rashida Tlaib and Ilhan Omar will be allowed by Israel to visit next month despite their pro-BDS views and radical pro-Palestinian positions. Is this a significant Israeli concession? A wise concession?

A. Israel has enacted regulations prohibiting entry to the country by supporters of BDS, the boycott movement that focuses on Israel. So this is at least technically a concession.

But the issues provoked by the Tlaib-Omar request to visit Israel and Palestine are much broader in scope than a one-off concession aimed at accommodating American congressmembers. They involve US-Israel and specifically Trump-Netanyahu relations, Israel’s official response to the boycott movement, and Israeli attitudes toward global anti-Semitism on the one hand and criticism from the American Jewish mainstream on the other.

A. Full disclosure: I am not a supporter of the BDS movement. I realize there are BDS supporters who simply want to oppose the settlements, the occupation, and Netanyahu government policies. That is legitimate. But I perceive too many BDS leaders and spokespersons who really seem to want to eliminate the State of Israel entirely. Their appearance on behalf of BDS is enough to discredit that movement, though not necessarily the idea of boycotting the West Bank settlements.

Yet I also oppose boycotts. I remember when, before 1967, trade with Israel was boycotted by the entire Arab world and everyone from Coca Cola to Toyota followed suit. That boycott was both not justified objectively and ineffective. It was counterproductive. It made us tougher and more resourceful. These days, boycotting settlement products and boycotting Russia because of Crimea are equally counterproductive. And inflicting economic damage on Iran by boycotting its oil looks far more likely to escalate armed conflict than to bring Tehran to its knees, begging Trump for a “deal”.

Besides, where do boycotts of Israel and/or settlement products stop? At software allegedly created by a settler but that now lives in the Cloud? At hi-tech products co-produced in Ramallah? At the Golan, claimed by a Syrian tyrant who has in recent years butchered and exiled half his population? I used to support trading the Golan for peace; today I accept that with Assad that is a non-starter and that we truly need the Golan for security.

Accordingly, since I oppose boycotts, I argue that Israel should not boycott people who support boycotting it. Let them come and see for themselves. Let them meet settlers and critics of the occupation, two-state solution supporters, opponents, and those who believe we are now increasingly in a disastrous one-state mode based on Netanyahu’s systematic dismantlement of the rule of law.

Q. But Israel has a Ministry of Strategy devoted essentially to combating BDS and vetting potential visitors for BDS ties.

A. It also seeks to root out and combat BDS supporters on US campuses on the grounds that they are poisoning the minds of young American Jews. I recently asked a very senior former official in that ministry if the real issue with American Jews who feel alienated from Israel is the pernicious influence of BDS or their legitimate disgust with the occupation, the settlers, increasing Orthodox Jewish influence and Israeli ultra-nationalism.

I did not receive a serious answer. I got the impression no one in the Strategy Ministry is asking or answering those questions. This points to a very serious lacuna in Israeli strategic thinking about the Diaspora. And since the economic damage inflicted on Israel by BDS is negligible, the only justification I can find for this ministry is that we are chronically paranoid.

Q. Judging by statements made by Congresswomen Omar and Tlaib, they seem seriously ignorant about Israel and Judaism.

A. All the more reason to welcome them here. If I were Netanyahu, I would invite them to a meeting, as Israeli prime ministers have frequently done with visiting members of Congress. If they turn him down, the stigma is on them, not him. While it seems likely that they are coming to Israel and the West Bank to speak out provocatively against Israel’s policies and thereby score points with their constituents and supporters, the fact remains that these articulate anti-Israel Muslim congresswomen want to come to Israel. Will they refuse to at least listen to Israeli Jews? If so, there are lots of ways Israel can respond and “score points” at their expense.

Q. Indeed, Netanyahu has recently taken to meeting with anti-Semitic leaders from Poland and Hungary. Why not Muslim congresswomen from America who deny they are anti-Semites?

A. The answer of course lies in the fact that some European anti-Semites and some Israelis find it temporarily convenient to befriend one another: the Europeans, being extreme right-wingers, support Israel against the Arabs; Netanyahu for his part needs the Europeans’ pro-Israel votes in European Union discussions of the Israeli-Palestinian conflict. That this is the height of hypocrisy on both sides goes without saying.

Q. Omar and Tlaib constitute half of “the Squad”, a foursome of new members of Congress who are both women of color and radical, outspoken left-wing Democrats. Yet Netanyahu, a political ally of Trump who frequently mimics Trump’s policies and pronouncements, is letting them in.

A. Note that Trump recently suggested that the four “go back” to the “broken and crime infested” countries they came from. As if the US these days (where three of the four were born) is not “broken”? Senator Lindsey Graham called the four women “a bunch of communists”. As if Trump’s best friends internationally are not communists (Xi of China, Kim of North Korea) or ex-communists (Putin)?

Here we get to Netanyahu’s apparent need to carefully balance considerations of realpolitik. I would assume his thinking and that of advisors like Israeli Ambassador to Washington Ron Dermer goes something like this. First, in principle it is not a good idea to refuse entry to any member of the US Congress; it’s a dangerous precedent that could in future backfire on Israel.

Second, in a little over a year the US may have a Democratic president for whom the radical wing of the party is important. Netanyahu, who is thoroughly identified by Americans and Israelis with the Republican party, has to start hedging his bets (more hypocrisy at work).

And third, assuming Israel’s coming elections end up as deadlocked as the last ones, the Likud might actually need to negotiate for support with one or more Israeli Arab parties. Here is an opportunity to make a gesture to four American political allies of the Arab parties--a gesture that might come in handy on September 18.

A. Here is where Netanyahu might need to mention to Trump that the US president just made a gesture to Israel’s and America’s mutual enemy, Iran, that Israeli hawks are not comfortable with: the Rand Paul-Mohammed Javad Zarif meeting at the United Nations last Thursday. Trump also has a short attention span: by now he may have forgotten about the Squad and the trip to Israel.

Still, Netanyahu may have to remind Trump that Israel has its own realpolitik needs to consider. Israeli and American interests are not quite as identical as the Netanyahu-Trump relationship appears to signal. Knowing Trump’s views about avoiding a military clash with Iran and his shallow grasp of Middle East strategic issues, it is not beyond the realm of possibility that in dispatching Paul to Zarif, Trump could be trying to do a deal with Iran at the expense of, among others, Israel.

As for Netanyahu’s electorate with its ultra-nationalist, anti-Muslim views, they will not appreciate this gesture. Yet at worst, parties further to the right than Likud will benefit by being positioned to criticize the prime minister. That’s minimal damage insofar as they are almost certainly partners in Netanyahu’s next coalition anyway.

A. Israel is busy with elections and summer vacation. Two articulate, provocative and highly critical Muslim members of Congress who are currently the focus of Trump’s most vile racist remarks are coming to Israel. They will have to be extremely outspoken to catch our attention in August.

Yet “outspoken” is what they do. True, Israel’s elections this time around are more about religion and state than the Palestinian issue that interests Omar and Tlaib. Still, it is safe to predict that their comments will ruffle feathers here, and not just on the ultra-nationalist right.

This will be interesting.