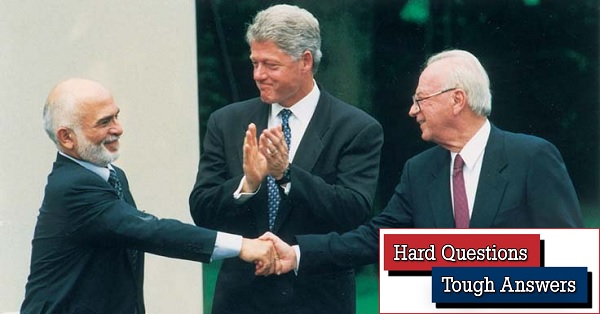 A. As noted last week, the state of relations is today very poor. The potential strategic significance of this development for Israel is far greater than the Netanyahu government cares to acknowledge. That the legacy of the late Yitzhak Rabin is involved matters little to Netanyahu, who as Likud leader in 1994 was one of those most responsible for inciting against Prime Minister Rabin.

The Israel-Jordan peace treaty was only made possible by the Israeli-Palestinian Oslo Accords. Oslo also belongs to Rabin’s legacy, but its outcome has always been a major source of controversy in Israel, in contrast with the Jordan peace treaty. Indeed, it was Oslo that led to Rabin’s murder on November 4, 1995.

The Hashemite Kingdom of Jordan could only make peace with Israel if it could contemplate the emergence of a Palestinian state in the West Bank and Gaza, thereby reducing Palestinian demographic and political pressure on Amman. Yet at the same time, one of King Hussein’s primary conditions for a peace treaty with Israel was that he be recognized as the ultimate custodian of the Muslim and Christian holy sights in Jerusalem, even after the creation of a Palestinian state.

Here we have two key reasons for the current poor state of Israeli-Jordanian relations: there is no prospect of a Palestinian state emerging, and the main Muslim holy site, the Temple Mount or Noble Sanctuary, is a powder keg that is being woefully mismanaged by Israel. A third reason is the priority that Netanyahu quite clearly assigns to Israel’s ties with Saudi Arabia and the United Arab Emirates--neither of which pressure him on the Palestinian issue--over links with Jordan. And a fourth reason is the sum total of more minor disputes and crises between the two countries that Netanyahu neglects.

Q. What specifically is Jordan’s concern with the lack of progress between Israelis and Palestinians? Even in an extreme case where Israel absorbs West Bank Palestinians into an apartheid entity and dooms itself as a Jewish and democratic state, why does this worry Jordan in particular?

The Hashemite Kingdom has absorbed well over a million Iraqi and Syrian refugees in recent decades. This has generated huge economic and humanitarian problems. But Syrians and Iraqis do not challenge Hashemite supremacy and the Hashemite monarchy. Another major influx of Palestinians (the earlier migrations were in 1948 and 1967) could pose an existential danger to the Kingdom.

This explains why Rabin’s 1994 promise of a peace process with the Palestinians was greeted by Jordan’s King Hussein with a peace treaty. Conversely, the more Jordanians are convinced that Netanyahu has no intention of moving toward a two-state solution and that his West Bank policies pose the ultimate threat of major political and security unrest that spurs migration eastward, the more they sour on relations with Israel.

True, Jordan still needs a close security relationship with Israel to deal with threats from neighboring Syria and even Iraq. These are posed by Iran and its proxies, including the still-hostile and conflicted Assad regime in Damascus.

Q. This concern for strategic security is after all fully shared by Israel. But beyond that?

A. Beyond that, Jordan’s King Abdullah is signaling his dilemma with Israel in a variety of ways. He has recalled Jordan’s ambassador over a dispute concerning two Jordanians being held by Israel in six-month administrative detention, reflecting security concerns that are deemed too sensitive to warrant open trial. He has refused to renew Jordan’s 25-year lease to Israel of agricultural and tourist sites at Naharayim on the northern end of the two countries’ border and Tsofar in the Arava in the south--a gesture Israelis had taken for granted.

Q. Perhaps a quick summit between Abdullah and Netanyahu would smooth things over . . .

A. Abdullah refuses to meet with Netanyahu, citing a huge credibility gap familiar to many European leaders (and many Israelis). Besides, Netanyahu insulted him when, after a tragic shooting incident two years ago in which two Jordanians--one a veteran friend of Israel--were killed by an Israel Embassy security guard, Netanyahu termed the guard a “hero”. And Netanyahu seemingly insults the Hashemites every time he refers favorably to their age-old enemy, the Sauds who rule Saudi Arabia, as strategic allies.

Earlier this year, in a visit to Amman, I was asked by a former senior Jordanian minister why Netanyahu ignores his natural ally in Jordan in favor of a more distant and far less trustworthy Saudi Crown Prince, Mohammed bin Salman (MbS) , who is a paper tiger and a serial screw-up (e.g., Yemen, Jamal Khashoggi). To add insult to injury, Israel does not appear to be speaking up for Jordan in Washington, where President Trump has not appointed an ambassador to Amman in three years, even as Israel advocates for Egypt’s and Saudi Arabia’s needs.

Q. Was the 25-year anniversary of Rabin’s achievement with Jordan observed in Israel?

A. Only informally, at a seminar at Tel Aviv University. Only two Jordanian retired military officers still friendly with Israel showed up for the occasion, and they refused to speak and refused to have their names acknowledged. Israeli veterans of the Israel-Jordan peace negotiations--retired Supreme Court Justice Elyakim Rubinstein and retired Mossad Head Ephraim Halevy--and Israel’s first ambassador to Amman, Prof. Shimon Shamir, noted that more than one hundred joint projects embedded in the 1994 peace treaty remain dead letters.

To be sure, additional Israeli prime ministers besides Netanyahu had reservations about Jordan. But once they were in positions of power, Yitzhak Shamir and Ariel Sharon, both Likudniks, the former in office before Rabin and the latter from 2001 to 2006, moved adroitly from right-wing “Jordan is Palestine” advocacy to recognition of the Hashemite Kingdom’s strategic importance for Israel as a reliable buffer against enemies from the east. Netanyahu, in striking contrast, first assumed the premiership in 1996 with empty promises of friendship with Jordan (quoted by Shimon Shamir: “You won’t believe what I will do for Jordan”). In Amman, which is higher in elevation than Jerusalem, Netanyahu has gone downhill ever since.

Q. Does the current effort to form a coalition by the diverse and conflicted anti-Netanyahu majority in the Knesset offer any promise of a better future for Israeli-Jordanian relations, in the spirit of Yitzhak Rabin?

A. Anyone who watched the keynote address by Blue-White leader Benny Gantz at the twenty-fourth commemoration of Rabin’s assassination last Saturday night saw, and heard, a retired general-turned-politician who clearly reminded us of Rabin. As Yedioth Aharonot’s Nachum Barnea noted, Gantz “unequivocally embraced all that Rabin advocated in the last two years of his life: military activism alongside peace agreements.”

Indeed, Gantz opened his November 2 speech with, “As Rabin said, I’m also a little emotional”--the phrase Rabin used in the very Tel Aviv peace rally that directly preceded his assassination. And he closed with a paraphrase of Rabin’s speech to the US Congress that began, “I, IDF number 30743, retired lieutenant-general Yitzhak Rabin . . . “. Perhaps not coincidentally, that speech was made to celebrate the Israel-Jordan peace treaty. And Rabin addressed not only Congress but Jordan’s King Hussein, who was in the audience.

A. One of the many things we have to hope a new, non-Netanyahu government will do for Israel is rescue relations with Jordan. That, in turn, cannot happen without a new departure on the Palestinian issue. The legacy of Yitzhak Rabin is very relevant to both contexts.