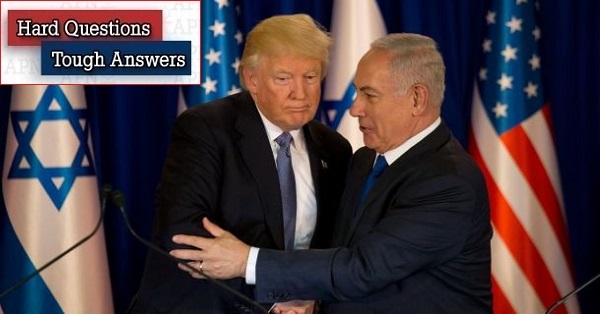 Q. Prime Minister Netanyahu just visited Oman, an event openly publicized by both parties. This presumably has something to do with peace. But with what country or party?

A. Oman has proven adept at maintaining good relations with all its neighbors during troubled times. Its ruler, Sultan Qaboos, and its minister responsible for foreign affairs, Yusuf al Alawi, have in recent years assisted the US and Iran in launching the process that produced the Iran nuclear deal (JCPOA) and have implemented a delicate balancing act among the many actors in the brutal civil war next door in Yemen. A week before Netanyahu’s visit, Palestinian leader Mahmoud Abbas was in Muscat. Israel and Oman have had both clandestine and diplomatic relations at various times over recent decades.

Netanyahu is of course perfectly capable of visiting an Arab country simply for the publicity, particularly when he and wife Sara can be photographed ingratiating themselves with an Arab monarch. It sends his political base the message that, regardless of the absence of a peace process with the Palestinians, Israel can cultivate strategic relations in the region. But Qaboos would hardly play along without cultivating a loftier motive--an Omani contribution, involving Israel, to regional peace and stability.

The fact of Abbas’s and Netanyahu’s consecutive visits hints ostensibly at an Omani role in mediating between Israel and the Palestinians. This seems doubtful. After all, Egypt and Qatar are both playing active roles in mitigating Israel-Gaza tensions, Abbas is boycotting direct diplomatic contacts with Netanyahu and US President Trump’s emissaries, and messages are easily transmitted by means of close Israeli security coordination with the West Bank-based Palestinian Authority.

In contrast, it is the Omani capacity to liaise with both Tehran and Washington and Netanyahu’s close ties with Trump that point to a more likely reason for Netanyahu’s visit. Both Israel and the US want Iran to withdraw from Syria and to cease arming Assad’s rebuilding army as well as Hezballah in Lebanon. Neither Netanyahu nor Trump apparently has direct contact with Iran. Could one or both of them conceivably offer in return for Iran’s withdrawal, through Oman’s good offices, recognition of and normalization with the Assad regime--whose survival in power is in any case a fait accompli? Might Netanyahu perhaps have delivered a message for Tehran to the effect that Trump would reciprocate by softening sanctions against Iran and negotiating a new JCPOA?

This is pure speculation. But it at least broaches topics that presumably would justify Qaboos’s decision to stick his neck out for a photo op with Netanyahu. The latter might also have asked the Omani leader to have a word with his fellow Arab monarch, Abdullah II of Jordan, regarding the latest crisis brewing between Jordan and Israel (see below).

An additional subtle benefit of Netanyahu’s Muscat visit might be to signal Saudi Arabia’s Crown Prince Mohammad bin Sultan, who works with Israel but whose status has been seriously compromised by the Khashoggi assassination scandal, that Israel is capable of dealing with the Gulf region independently of his good offices. An intriguing parallel is Abu Dhabi’s readiness these days to host Israel--national flag, anthem, minister of culture and all--for a judo tournament.

Q. Apropos Jordan, King Abdullah triggered a mini-crisis when he invoked a clause in the Jordan-Israel peace treaty to demand the return of two territorial enclaves leased by Israel 24 years ago when the treaty was signed. Why is this controversial?

A. It shouldn’t be. The king is within his rights. The loss of a patch of agricultural land and a tourist attraction (the ruins of the Yishuv’s first hydro-electric plant dating back to early mandatory days) is hardly critical to Israel. Abdullah has never made a secret of his intention to reclaim the land once the 25-year lease is up (technically, a year from now, with a year’s non-renewal notice required). He faces an angry public campaign in Jordan to get the land back, spearheaded by anti-peace elements at a time of severe economic crisis. A majority in the Jordanian parliament opposes the entire peace treaty with Israel.

Abdullah is also angry with Israel and the US regarding steps they have taken in Jerusalem, including moving the US embassy there, eliminating a separate US consulate that dealt with the West Bank and Gaza, and ignoring or downplaying Jordan’s role under the peace treaty as guardian of Jerusalem’s Muslim and Christian holy places. Then there is the controversial Greenblatt-Kushner proposal for a confederation involving Jordan and a Palestinian state: neither Abdullah nor Mahmoud Abbas welcomed it and Abdullah let it be known that he was not consulted about the idea in advance. Trump’s decision to cut funding for UNRWA, which supports a considerable part of Jordan’s Palestinian refugee population, didn’t help.

Netanyahu, whose clumsy and jingoistic treatment of a violent security incident in Jordan in July 2017 also angered the king, seems to have ignored the warning signs of this new crisis. Now he wants to negotiate. But Abdullah, whose signals of discontent were ignored and who has committed himself publicly, does not.

The broader strategic backdrop is critical. Jordan forms a vital buffer between Israel and Iranian forces deployed in Syria and Iraq, both of which border Jordan. Israel and Jordan maintain close military and intelligence coordination, with US involvement, against both Iran and militant Islamists like ISIS. Israel has been generous in supplying vital water to Jordan. On the other hand, Jerusalem needs Abdullah’s steady hand regarding the Palestinian issue in a broad variety of ways.

The short-sighted demand from Netanyahu’s ultra-nationalist coalition is to get tough with Jordan: “cut their water, teach them a lesson.” Netanyahu, hopefully, knows better.

Q. Finally, in recent weeks Israel’s Institute for National Security Studies, a moderate think tank led by former head of IDF Intelligence Amos Yadlin, has proposed a new “Political-Security Framework for the Israeli-Palestinian Arena”. It has publicized the plan widely. Is Netanyahu impressed?

A. Netanyahu’s response to the plan, as quoted by Yadlin who presented it to him, was something like, “you may understand strategy, but you don’t understand politics”. In other words, Netanyahu’s political needs and goals take priority over Israel’s strategic needs.

Yadlin indeed understands those strategic needs. He apparently believes he understands Israel’s ultra-nationalist politics, too: his think tank’s plan is truly scaled down to Israel’s most minimal interim strategic concessions if it is to remain Jewish and democratic in the absence of a peace deal with the Palestinians. That Netanyahu, Israel’s right-wing mainstream and the Ramallah-based PLO all reject the plan should not have surprised Yadlin.

Q. What is so minimalist about the plan?

A. It is not a peace plan but rather a unilateral interim arrangement. It leaves the Israeli security establishment in overall charge in Palestinian autonomous territories, which would expand by Israeli decree to a contiguous 65 percent of the West Bank. Israel retains the Jordan Valley, Greater Jerusalem and the areas west of the security fence. All settlements remain in place, though those inside the 65 percent may not construct new housing.

According to the plan, once this new unilateral configuration is in place, Israel will agree to negotiate a comprehensive peace deal on condition that the Palestinians recognize the right of the Jewish people to a state, agree to end the conflict without the right of return, and accept Israel’s security demands. Israel for its part will launch a comprehensive plan to develop the Palestinian territories with Arab and international funding. Arrangements for Gaza are not mentioned.

There is so little in this plan for Palestinians in terms of territory and rights, and it is so arbitrary while nevertheless constraining the settlement movement, that it is not surprising so many interested parties reject it.

Q. Well, if everyone rejects the plan, where does that leave us?

A. On the one hand, all relevant parties are still waiting for the Trump administration to present its plan. If and when that happens, Netanyahu will not be able to reject it so cavalierly, and the maneuvering around the US initiative will undoubtedly occupy many ensuing months. But unless Trump himself is prepared to brutally compel the relevant actors to accept the plan, it too will go nowhere. The Trump team has already signaled its approach with its friendly attitude to the settlements and consolidation of its version of American interests in “united Jerusalem”.

It is useful to have the minimalist INSS interim plan on the record even as all the relevant players reject it. It may come in handy when the Palestinian issue again explodes in our faces. Meanwhile, with the help of Netanyahu, Abbas and Trump, and in view of the relative indifference of the Arab world, Israelis and Palestinians will remain on a slippery slope toward a very ugly and volatile one-state reality.