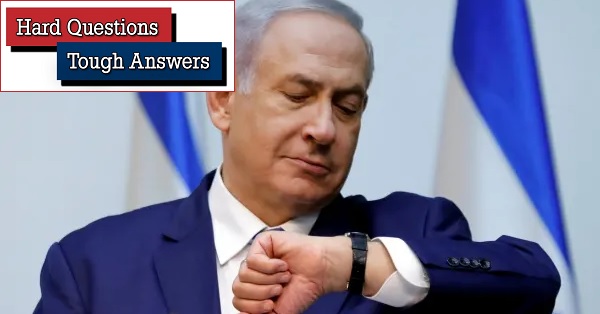 Q. Assuming no last-minute success before Wednesday night in rounding up 61 signatures for another coalition try, PM Netanyahu is looking at both an indictment and March elections. What schemes is he cooking up to avoid the first and win the second?

A. The schemes, both realistic and imaginary, have been unveiled in the course of recent days and weeks. They range from the domestic--election reform and plea-bargaining--to the global arena: a defense pact with the United States and military escalation with Iran.

A. Netanyahu has in recent days proposed quickie legislation to mandate a kind of “run-off” for the post of prime minister between himself and Blue-White’s Benny Gantz. This direct election would replace a third round of Knesset elections.

The idea hasn’t whipped up much enthusiasm, including from Gantz. After all, Israel tried direct elections for the premiership around the turn of the century, without much success. The current instance proves why: if neither Netanyahu nor Gantz can form a coalition under present circumstances, why would either one of them, having won a direct election for prime minister, prove any more successful with the current deadlocked Knesset. This would be useless.

Failing this option, and given that no one has succeeded in rounding up 61 signatures of MKs for an alternative election-stopping coalition, Netanyahu has tried to tempt Gantz into a rotation-based coalition in which Netanyahu begins as prime minister for a mere five or six months, followed by Gantz for two years.

Why only half a year? Here everyone understands that Netanyahu has something up his sleeve--some gimmick, doable in six months, that supposedly will radically improve his standing both judicially and politically. Netanyahu replies that in any case, in the event of a third round of Knesset elections, he’ll remain caretaker prime minister for nearly six months, until March 2020, so why not agree to his rotation idea and deliver stability rather than yet another election next March.

At the time of writing on Monday, Blue-White was consistently rejecting this offer. After all, the party has pledged not to serve under an indicted Netanyahu. Besides, Blue-White’s veterans of Likud-led governments warned that Netanyahu would find a way to wiggle out of any conceivable rotation agreement and remain in office, thereby branding Blue-White a bunch of naïve amateurs. A bad idea.

Q. What could Netanyahu have up his sleeve for the next six months?

A. A plea bargain heads the speculative list. This is indeed pure speculation by informed political insiders. It assumes that, deep down, Netanyahu knows--having been persuaded by his lawyers--that he will eventually be convicted and sent to jail, and that such a fate truly frightens him. Accordingly, Netanyahu wants to negotiate with Attorney General Amichai Mendelblit from a position of strength, as a reanointed prime minister who also enjoys the option of requesting immunity from a re-empowered Knesset. The basic idea is to stay out of jail in return for paying a fine and agreeing to leave politics.

But Netanyahu has also embarked on a number of strategic international initiatives that, he apparently believes, can be brought to fruition within half a year. One or more of these achievements would either strengthen his political position and his popularity in anticipation of a legal struggle or, alternatively, reinforce the ultra-nationalist legacy he leaves behind.

A. Netanyahu met last week, in Lisbon, with US Secretary of State Pompeo. (An attempt to meet Pompeo in London was scuttled by the British; the indicted prime minister of Israel appears to be “non grata” in some world capitals.) According to Netanyahu, he and Pompeo discussed “Iran, Iran and Iran”.

Netanyahu’s entourage also allowed that he and Pompeo discussed US support for Israeli annexation of the Jordan Valley, and some sort of bilateral US-Israel defense treaty directed against Iran. Informed media sources speculated that Netanyahu also brought up the idea of the US promoting Israeli non-aggression pacts with Morocco, the UAE, Bahrain and Oman.

Q. These schemes indeed seem intended to enhance Netanyahu’s electoral profile at home. Are they viable? Are they good for Israel?

A. The Iranian issue is serious. Despite domestic turmoil caused at least in part by US economic pressure, and anti-Iran protests in Iraq and Lebanon, Iran continues to pursue hegemonic goals in these countries. Netanyahu seems to believe that the regime in Iran is weakening under pressure and that more pressure will bring it down. I’m skeptical; more pressure will render the regime more aggressive.

Perhaps Israel’s greatest concern is a threatening Iran-led missile build-up along Israel’s borders with Lebanon and Syria. It is legitimate and logical for the prime minister of Israel to discuss this threat with the US, just as he does periodically with Russia’s President Putin. So an agenda of “Iran, Iran, Iran” makes sense to the Israeli public.

The rest either makes no sense, or is potentially detrimental to Israel’s strategic interests.

A. Israel has always taken pride in being able to defend itself by itself. True, Iran is a distant threat, not a country bordering Israel that is easy to defend against. But that’s the whole point: Israel is no longer threatened by its Arab state neighbors--only by distant Iran and its proxies. It has repeatedly proven its ability to infiltrate Iran at the intelligence and operational level. It has successfully pushed Iranian proxies away from its borders. It would have less to worry about Iran from a nuclear standpoint if Netanyahu had not egged on Trump to exit the JCPOA Iran nuclear deal--a move that has benefited absolutely no one.

Does Israel want to be obliged by a treaty with the US to send troops to Afghanistan? Does it want to do a nuclear striptease as demanded by treaty obligations? Does it want Washington to treat it as a protectorate? Conceivably, Netanyahu is trying to tailor a more limited pact with the US to be operative only against Iran. Yet President Trump, like Israel’s “friends” in the Gulf, has lately displayed a conspicuous reticence to take on Iran militarily despite Netanyahu’s urgings. A deal with Trump regarding Iran is hardly an electoral asset back in Israel. Nor is a full-fledged Israeli war with Iran--if that’s what Netanyahu, in a worst-case scenario, is driving at.

Nor, for that matter, is a US-backed Israeli move to annex the Jordan Valley. This would preclude the option of a Palestinian state in the West Bank bordering Jordan and the Arab world. It would leave West Bank Palestinians with the choice of living under apartheid in Israel or fleeing to Jordan. Such a move is liable to cost Israel either its very Zionist essence, or its strategic peace relationship with Jordan, or both.

Netanyahu’s more extreme ultra-nationalist messianic “base” is lobbying through its social and print media to do precisely this: swallow the West Bank, rendering Jordan “Palestine” and basing Israel’s regional interests on its relations with the Gulf further to the east. Trump’s evangelical supporters are cheering them on. Trump has already recognized Israel’s right to claim the Jordan Valley. The outcome of annexation would be disaster, with the entire Arab world turning against an apartheid Israel.

The Jordan Valley is important to Israel from a security standpoint. To confuse that reality with annexation politics would be a serious strategic error for Netanyahu. Trump, it appears, couldn’t care less--if he even knows where the Jordan Valley is.

Q. And bilateral non-aggression pacts with a few Arab countries?

A. Not necessarily bad. But not necessarily helpful, either. Morocco, the UAE, Bahrain and Oman are far away from Israel. With the exception of a Moroccan contingent sent to reinforce Syria on the Golan front before and during the 1973 Yom Kippur War, none of these countries has ever been in a situation of war with Israel, which currently has low-level relations with all four.

A non-aggression pact makes sense as a step toward peace with a belligerent state bordering Israel. Prior to 1977 when peace broke out with Egypt, non-aggression was considered as a peace-building option between it and Israel. Today the idea could conceivably make sense between Israel and Syria or Israel and Lebanon, though Iran’s machinations in both countries and the dismal record of Syria’s Assad as a butcher of his own people would pose serious obstacles.

But a non-aggression pact with Oman or Morocco? This would be a total fiction, at best cosmetic, packaged solely for marketing to the less-informed among Netanyahu’s potential electorate. In any event, it seems not to be on the near-term agenda in Morocco, Pompeo’s next stop after Lisbon. Morocco’s king refused even to see the American secretary of state.

A. If you are reading this after midnight Wednesday in Israel, you know whether a third round of elections is definite. Assuming that is the case, the questions that remain open are: 1) After failing twice, can Netanyahu win, and if he does how will this affect his legal fortunes? 2) Will Netanyahu negotiate a plea deal? 3) How might Netanyahu exploit the months between now and March elections to present the Israeli public with strategic “faits accomplis” that could conceivably convince a few voters but are liable to do serious damage to Israel’s regional strategic interests?

And finally 4) How much longer will the Israeli public and its institutions of state allow one man to put the entire country through the wringer just to stay in office and out of jail?