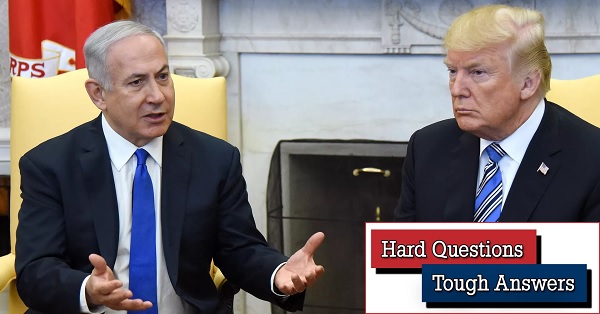 Q. While Israel plods through a frustrating coalition-forming ritual, the US is busy dismantling its traditional security posture in the Middle East. It is abandoning the Syrian Kurds, over-accommodating a belligerent Islamist Turkey, and not responding militarily to an Iran-sponsored attack on Saudi energy infrastructure. What does all this mean for Israel?

A. Some Israelis and Americans will undoubtedly point to a recent visit to Israel by US Secretary of State Mike Pompeo, along with a successful US operation to rid the world of ISIS leader Abu Bakr al-Baghdadi, as signs that all is well with the American defense posture in the Middle East. But these are essentially tactical diversions. ISIS will survive al-Baghdadi’s demise much as al-Qaeda survived the removal of bin Laden. And Pompeo’s hand-holding in Jerusalem seemed designed merely to reassure Israel that a strategy-blind, twitter-happy US president is its friend.

At the end of the day, President Trump is beginning to make good on his commitment to end US military involvement in Middle East conflicts. This is a legitimate if problematic enterprise that resonates with some sectors of American public opinion. It was advocated in his day by President Obama and is now echoed in pronouncements by leading Democratic presidential hopefuls like Elizabeth Warren. But it is being pursued incredibly ham-handedly by a US leader totally devoid of strategic understanding. The potential ramifications for Israel are multiple: strategic, economic, political.

A. If Trump can abandon Middle East allies like the Syrian Kurds and the Saudis, Israel must take note. True, these are two very distinct US allies: the Syrian Kurds’ only sin is seeking their own place in the sun and fighting America’s enemy, ISIS. In contrast, Saudi sins are many--murdering Jamal Khashoggi, decimating Yemen, being so wealthy they can buy off anyone. Yet despite the vastly different circumstances, Trump’s abandonment of both in their hour of need is stunning.

One key component of the US administration’s abandonment decisions that Israel should pay attention to is simplicity. In the flash of a tweet and a phone conversation with Turkish President Erdogan, Trump could decide to remove a few hundred soldiers from their “tripwire” function and allow Turkey to invade Kurdish northeast Syria. It was even simpler to make no decision at all and not respond after the spectacular Iranian-sponsored attack on Saudi energy infrastructure. Perhaps this reflected more fear of conflict with Iran than reluctance to defend Saudi energy interests.

In contrast, pulling US troops from Afghanistan and Iraq, as promised also by Trump, is more complicated and involves protracted negotiations. There is also apparently an economic motive for remaining: rare minerals in Afghanistan, oil in Iraq. The financial angle is characteristic of Trump’s approach to international relations. Note in this connection that the US is actually deploying a few hundred troops to secure oil-producing Deir al-Zour in eastern Syria.

Q. Should Israel fear a Trump decision to abandon it?

A. The US does not deploy combat troops in Israel. Nor does Israel need or request American protection. The modes of military cooperation Israel engages in with the US--cyber, radar early-warning, shared intelligence, joint exercises, R&D--are not likely to be affected by Trump’s itchy twitter finger.

But Trump’s behavior in neighboring Middle East countries affects Israel. This is where economic and particularly political issues enter into the Israeli-American relationship under Trump. Prime Minister Netanyahu has placed all his American bets on Trump and his Republican and Evangelical supporters. He has abandoned and belittled American Democrats and the vast majority of American Jews, who are neither Orthodox nor Republican. Now he encounters the reality that under Trump, US military commitments in the Middle East cannot be depended on.

True, the Kurds have no US lobby at all to rely on. Israel does. But when Trump abandons the Syrian Kurds in favor of deals with Turkey and Russia on Syrian soil dangerously close to Israel, Netanyahu has no friends among the opposition to Trump in Washington whom he can appeal to. Note how House Speaker Nancy Pelosi’s recent Mideast trip brought her to Jordan but not to Israel.

Jordan, incidentally, is a critical case, highlighted by Pelosi’s visit. A quarter century after the Israel-Jordan peace treaty was signed, relations are at a dangerous low. Netanyahu, following Trump, prefers to invest strategically in more distant Saudi Arabia and the UAE even as the former proves to be militarily a paper tiger and the latter negotiates with Iran. Both Netanyahu and Trump ignore the Hashemite Kingdom at their risk. The US has not had an ambassador in Amman for three years. But only Israel will pay the immediate price of a Jordanian decision to downgrade relations.

Q. Where do Russia, Turkey and Iran enter the picture of the US move to abandon the Kurds?

A. Arguably, any US president confronting the strategic situation in northern Syria might opt for Turkey over the Kurds. Turkey is a NATO partner, 80 million strong, powerful militarily and economically, sitting astride the junction of three landmasses: Europe, Asia and the Middle East. Turkey also controls a large portion of the Muslim refugee flow to Europe (from Syria, Iraq, Afghanistan, etc.), exacting huge European bribes in return for stanching that flow. In contrast, the Syrian Kurds number only two million, and Kurds in general are split among four countries and two languages, without a homeland of their own.

But the Kurds fought and died in recent years for a cause dear to the US: eliminating ISIS. All they asked from America was weapons and air support. In short, they were a valued ally. Turkey, on the other hand, has zigzagged in recent years between abetting Islamists in Syria, collaborating with Russia and Iran in Syria, buying Russian arms, and hosting and coordinating with US forces. Erdogan is the kind of autocrat both Trump and Putin like to deal with. His latest deals with them were an exercise in realpolitik that can only be grudgingly admired.

Unless you are a Kurd. Or an Israeli. If Trump could abruptly and brutally dump Washington’s Kurdish ally this way, there is no telling what he might do in additional Middle East contexts. For Israel the biggest lesson of the abandonment of the Syrian Kurds is that, as a Middle East minority nation, it’s good we have a state of our own and a considerable degree of geostrategic independence.

Still, the strategic situation to our north has just deteriorated, thanks to Trump. Turkey, ideologically hostile to Israel, is now better positioned. Russia and Iran have gained clout; Russia has even happily taken possession of US bases. The US, though guarding some oil wells at Deir al-Zour and maintaining a base at Tanf near the Jordan-Syria-Iraq border, is poorly positioned to deter Iran from pursuing its military drive into the Levant, right up to Israel’s northern borders. Meanwhile, American abandonment of the Iran nuclear deal and its sanctions pressure on Tehran have only proven counter-productive.

A. Several bottom lines. To begin with, America’s global standing has been hurt, not for the first time, by President Trump’s impulsive decisions regarding the Syrian Kurds and the Iran/Saudi Arabia confrontation. US military hesitancy in the Middle East empowers Russia and China to stake out new ground for hegemony in distant places like Ukraine, Central Asia and the South China Sea.

For Trump, the Kurds are guilty of “not showing up for us at Normandy or Inchon” and of dealing in Syria with only “sand and death”. That Netanyahu could so intimately link Israel’s fortunes to such a strategic ignoramus is but one of many good reasons for replacing him as prime minister.

Finally, the American dereliction of duty vis-à-vis the Kurds in Syria and following the Iranian attack on Saudi Arabia worries Israel. Iran is displaying new military capabilities and the US cannot be relied on. Yet so politicized has Netanyahu’s strategic thinking become that it is impossible to discern whether the current series of high-level discussions of threats and options by both the government of Israel and the IDF is designed to hasten the formation of a new unity government, speed the allocation of new defense budgets, or merely to alert the public.