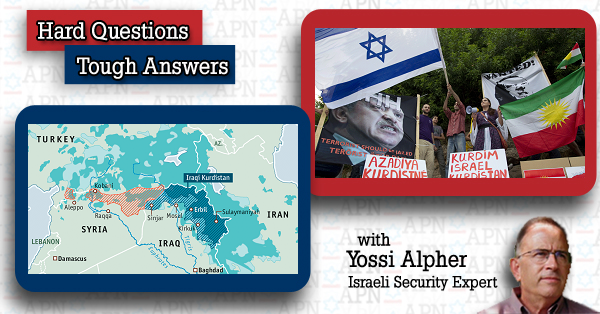 Q. Last week you surveyed four challenges for Israel-US relations in the Middle East. But you left out the Kurds.

A. The Kurdish issue is complex. It goes way beyond US-Israel relations and involves a major part of the Middle East.

The issue, in a nutshell, is this. In recent weeks, Kurdistan in Iraq has gone from near-independence, to voting in a referendum for independence, to being besieged militarily and economically by neighbors Iraq, Iran and Turkey. Israel, alone in the world, supports Kurdish independence. The US, the Kurds’ military ally in the fight against ISIS (and earlier against Saddam Hussein), has condemned the referendum and abetted the Iraqi siege.

Q. How did the Kurds get themselves in this mess? And how does Kirkuk figure so centrally in the Kurdish independence controversy?

A. The referendum was held despite the clear opposition of the US and every country in the region except Israel. Kurdish leader Masoud Barzani, whose democratic mandate is questionable and whose government is accused of widespread corruption and nepotism, apparently thought an electoral fait accompli would enhance his leadership position and eventually be accepted by the region. Nor did he (like in a parallel situation in Catalonia) pledge to actually declare independence immediately.

The referendum itself was held not only in purely Kurdish regions but also in areas to the south occupied by the Kurds in the course of fighting ISIS since 2014. Considerable non-Kurdish and even anti-Kurdish populations of Turkmen, Yazidis, Christians and Arabs live in these areas, thereby rendering the Kurdish referendum less than purely Kurdish. One of these areas is the city of Kirkuk, venerated by Kurds as their “Jerusalem”. It is the heart of northern Iraq’s oil industry that provides Kurdistan with most of its income. The referendum vote was also sullied by widespread accusations of vote-rigging.

The neighbors reacted immediately to the referendum outcome in favor of independence by closing borders and air traffic. Turkey threatened to close the pipeline through which Kurdistan exports its all-important oil. Then Iraqi forces, counseled by Iran’s Revolutionary Guards and apparently with the knowledge of the US, exploited political divisions among the Kurds and moved almost without a fight into Kirkuk and the oil fields.

This leaves Barzani and his forces isolated, besieged and in control of barely half of Kurdistan’s oil. Iraqi Kurdistan, not for the first time, is split between Barzani’s KDP party fiefdom in Erbil to the northwest and the rival PUK party in Suleimania and Kirkuk to the southeast. The decision to hold the referendum, particularly in disputed ethnically-mixed areas where the Kurdish claim to “ownership” is disputed, appears to be a classic strategic error of judgment on the part of the Barzani clan.

Barzani assumed that his leading role in defeating ISIS in northern Iraq granted him sufficient gratitude from his neighbors to guarantee their approval or at least forbearance. Instead, he ran into realpolitik. That is an old story in the Kurds’ hapless century-long search for independence in four different countries--Turkey, Syria, Iraq and Iran--each with a Kurdish minority of millions.

Q. Why is the US opposed to Kurdish independence? Why does it appear to be taking the side of Iran, Turkey and Iraq in this dispute?

A. Since the 1991 war against Iraq over Kuwait, the US has armed, trained and shielded Iraqi Kurdistan. But since the 2003 toppling of Saddam Hussein and occupation of Iraq which resulted in severe fragmentation there--an event that gave birth to ISIS and exported chaos throughout the region--Washington feels obliged to help restore stability and hold Iraq together. Lest we forget, in Iraq the US shed the blood of more than 4,000 of its troops.

In general, even with regard to additional chaotic Arab states like Syria, Yemen and Libya, the US has behaved very much like a status quo power. It has rejected the notion that the 2011 Arab revolutions offer an opportunity to abandon post-WWI imperialist-imposed artificial borders and make sense of the region’s essentially tribal nature.

Accordingly, while Washington pays lip-service to the Kurds’ right to self-determination as a principle, at the practical level it supports the territorial integrity of Iraq, Iran, Syria and Turkey. One obvious strategic by-product of recent Iraqi Kurdistan events finds the US tacitly allied not only with Iraq’s Shiite-dominated government and Turkey’s Islamist-authoritarian Erdogan, but with Islamist Iran--President Trump’s arch-enemy--as well.

For its part, Tehran’s Revolutionary Guards Quds Force appears to be maneuvering and manipulating unhindered in the Kurdistan dispute. That same Quds Force is spearheading Iran’s bid to establish hegemony over the Assad regime in Syria, with Russian connivance, thereby bringing Iranian and Iranian-proxy forces close to Israel’s northern borders.

A. Israel and the Iraqi Kurds have a long history of ties. Israel began supporting the Kurds, then led by Mulla Mustafa Barzani, Massoud’s father, back in the 1960s when they were weak, impoverished and fighting for survival against a series of Iraqi Arab nationalist leaders that culminated in the violent and vicious Saddam Hussein. Saddam gassed thousands of Kurds and displaced tens of thousands. Essentially, Israel helped non-Arab and non-Muslim Middle East minorities that were fighting the same Arab enemy as Israel and that were prepared to fight for themselves with the help of arms and military training from Israel. An autonomous or independent Kurdistan--a second non-Arab political entity in the heart of the Middle East--in effect reaffirms Israel’s own Zionist narrative regarding its right to exist in the Arab heartland.

Back in the ‘60s and ‘70s, the Kurds reciprocated Israel’s assistance by smuggling Iraqi Jews to Israel via a then-friendly Iran. And it served Israel’s interests when the Kurdish fight against Iraq pinned down Iraqi forces that otherwise might show up at the front with Israel. But there was--and is--nothing mercenary or exploitative in the warm reciprocal relationship between the two peoples.

For a while in the early 1970s, the CIA partnered with Israel in supporting the Kurds. After 1991 the Iraqi Kurds again enjoyed US military support. But they never forgot their debt to Israel and have maintained friendly ties. Currently, from Israel’s standpoint support for Kurdish independence reflects both a debt of honor and recognition that Iraqi Kurdistan, which borders on Iran and Syria, offers a potentially friendly base for Israel alongside two enemy states. Accordingly, PM Netanyahu has lobbied Washington and the capitals of Europe to adopt a friendlier attitude toward the Kurdish quest for independence.

Netanyahu’s quest is not popular anywhere in the Middle East outside of Kurdistan, and even there it is downplayed in the vain hope of currying Arab favor. As a veteran of Mossad operations to support the Kurds and other oppressed Middle East minorities, I have to register my approval of what Netanyahu is doing--something I don’t often do.

Notably Russia, too, quietly supported Iraqi Kurdish goals with heavy energy investments. Now that Massoud Barzani has brought the wrath of the entire region upon the Kurds, Moscow has had second thoughts and is consulting with Tehran and Baghdad, not Erbil.

Q. Is there a Syrian Kurdish connection?

A. Not really. The Syrian Kurdish leadership, which has exploited revolution in Syria to establish a high degree of autonomy, gets military aid from Russia and especially the US but claims to have no aspirations for independence. Its relations with the Iraqi Kurdish leadership are poor; historically it is much closer to the Turkish Kurds, who are severely repressed by Ankara.

The dichotomy between the Iraqi and Syrian Kurds generally reflects the Kurdish dilemma. Somewhere over 30 million Kurds in the Middle East are divided by nationality, language (very different dialects of Kurdish), history and politics.

Israel is not known to have any specific ties with the Syrian Kurds. In assisting them militarily, the US treads a fine line between recruiting their military help for the fight against ISIS in Syria and not overly alienating the Erdogan government in Ankara, a problematic NATO ally that sees them as an enemy.

Q. Here and there we hear the argument that Israel is hypocritical: it supports Kurdish independence but thwarts Palestinian independence. And what about the case of Catalonia in Spain: any connection?

A. The link among all three was eloquently discussed last week by Shlomo Ben-Ami, a former Israeli foreign minister and ambassador to Madrid who is currently vice-president of the Toledo International Center for Peace: “In Iraq, the Kurds base their demand for independence on the claim that the Iraqi state is oppressive and failing. But Catalonia is not an oppressed nation, and Spain is not a failed state. Invoking Generalissimo Francisco Franco’s long dictatorship--now four decades in the past--is a feeble attempt to disguise the separatists’ economic pretensions and overblown sense of cultural superiority.

“Such perceptions matter, because what frequently seals the fate of independence movements is the response of third countries.”

Ben-Ami is correct to speak of perceptions regarding colonialism. But the issue runs both ways. Rule by Turkey, Iraq and Syria (less so, Iran) over Kurds is no older and no younger than the Balfour Declaration--100 years. It is at least as colonial as Israel’s catastrophic insistence on holding on to the West Bank. And Barzani’s Kurdistan is probably less authoritarian, less corrupt and less fragmented than most sovereign Middle East countries--certainly less than Palestine.