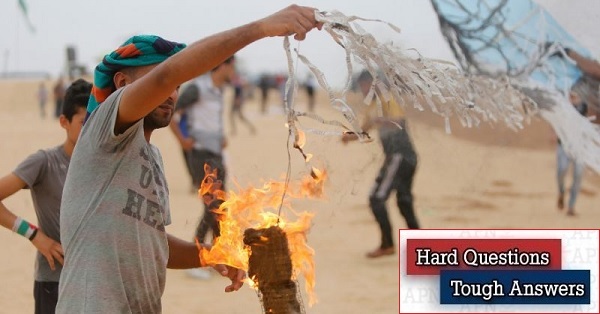 This week, Alpher discusses last Wednesday’s informal ceasefire agreement with Hamas and this week's attacks on Israel with rockets, mortars and incendiary devices; the bottom line for Gaza; new proposals on the Palestinian issue as a whole; old options that are resurging and whether they are still relevant; and recent widespread public unrest in Jordan and its effect on Israel and the Palestinian Authority.

Q. Last Wednesday’s informal ceasefire agreement with Hamas in Gaza has already been violated this week by attacks on Israel using rockets, mortars and incendiary devices. Where does this leave us?

A. Last week’s rocket and mortar attacks were the first on Israel since the summer 2014 war. They came in the wake of the death of over 100 Gazans in the demonstrations and attacks at the border fence, particularly on May 14, which commemorated “Nakba Day” and witnessed the inauguration of the US embassy in Jerusalem. Israeli security officials had to acknowledge that, after near four years, Israeli deterrence along the Gaza boundary had failed.

Still, the mortar and rocket attacks from Gaza were restricted to Israel’s “Gaza periphery” kibbutzim. Correspondingly, Israel’s reprisal air and artillery attacks were limited to Hamas infrastructure and ordnance facilities that not surprisingly had been evacuated in advance by Hamas. The torching by Hamas kites and helium balloons of Israeli wheat fields, orchards and forests also produced no casualties and was treated by Israel as a kind of extension of mass Gazan protests at the fence--not a casus belli.

Last Wednesday’s ceasefire was the fruit of mediation by Egyptian Intelligence officers between Israel and Hamas. Egypt had mediated the 2014 ceasefire and had an obvious incentive to restore it. Israel’s motives for agreeing were clear: no Israeli or Palestinian lives had been lost last week and Israel did not seek escalation that would inevitably generate casualties and inflame matters even further. Israel prefers to focus on the Iranian threat from the north; to the extent Iran was encouraging the Gaza attacks, here was another reason to end them.

Indeed, looking to Israel’s northern borders, there is apparently substance to the argument that Israel’s actions against Iran in Syria are persuading Russia’s President Putin to push for Iranian withdrawal there. Complicated multilateral negotiations are underway to facilitate a Syrian armed forces return to the country’s south, with Israeli acquiescence, in return for the distancing of Iranian forces from Syria’s south and possibly fulfillment of President Trump’s pledge to remove remaining US troops from eastern Syria. A conflagration on Israel’s Gaza front would only serve Iran’s interests.

Besides, PM Netanyahu was set to visit Berlin, Paris and London this week--he departed on Monday as this was being written. In his meetings with Merkel, Macron and May, Netanyahu wants to concentrate solely on Iran. He will presumably advocate in Europe on behalf of the Trump administration’s withdrawal from the Iran nuclear deal in the face of the European Union’s condemnation and opposition. Netanyahu also needs European understanding for Israel’s attacks on Iranian military infrastructure and ordnance in Syria.

Accordingly, Netanyahu needs quiet on the Gaza front. He can depend on the Sunni Arab states and even the West Bank-based PLO/Palestinian Authority not to protest about Gaza too strongly. They all know that Iran’s demands to escalate there are relayed to Gaza-based Hamas and Islamic Jihad via those organizations’ offices in Beirut. They also know that Gazans gain nothing by attacking Israel.

Yet at the time of writing Netanyahu did not have quiet. On Saturday, Israeli sharpshooters apparently killed a young Gazan female medic as she was attending to the wounded at the fence. On Monday, Israeli fields were still burning and the occasional mortar round was falling. It was not far-fetched to conclude that Hamas, Islamic Jihad, and behind them Iran, wanted to spoil Netanyahu’s trip.

Q. The bottom line for Gaza?

A. There is none. The latest conflagration, which as noted was still ongoing at the time of writing, ended with a whimper. As Nachum Barnea wrote in Friday’s Yediot Aharonoth, “The round that just ended is frustrating not because there were no casualties from Israel Air Force bombings. It is frustrating because we dumped tons of expensive bombs and rockets--we’re a rich, wasteful country--and achieved nothing. Despite being hit by 150 [Gazan] mortar rounds in a day, plus dozens of rockets, we did not signal the other side that the rules of the game had changed. The IDF wanted to, but was blocked.” Residents of the Gaza periphery also advocated the government in vain to respond more forcefully against Hamas in Gaza in order to restore deterrence.

Q. No strategy for Gaza, then. And regarding the Palestinian issue as a whole, are there any new proposals?

A. One very provocative proposal from the political left was presented on May 24 in an op-ed in Haaretz by a prominent Labor member of Knesset. MK Eitan Cabel told the Israeli left that the time had come to abandon the failed Oslo formula for two-state negotiations. Labor, Cabel wrote, has to “sober up” and adopt “a world view that reflects reality”.

Negotiations over a two-state solution are currently not realistic, according to Cabel. “We cannot wait for the Palestinians, because [Palestinian leader] Mahmoud Abbas has already given up on the idea”. Indeed, while waiting for a solution to happen, Israel is sliding into an irreversible bi-national situation. Accordingly, Cabel proposes unilaterally annexing the West Bank settlement blocs and the Jordan Valley. Outside these areas settlement construction would be frozen and negotiations would begin to evacuate and compensate the 100,000 settlers who live there.

Cabel believes that Labor will continue to lose elections unless it reassesses its policies toward the Palestinians. His proposal has provoked lively debate among Labor and Meretz politicians on the political left, with many warning that resort by Israel to the sort of unilateral measures Cabel advocates would permanently alienate moderate Palestinians. Cabel’s unilateral annexation of West Bank territory, his left-wing critics argue, would actually promote, rather than combat, movement toward a bi-national state by thoroughly disheartened Palestinians.

Q. Cabel’s proposal is reminiscent of PM Ehud Olmert’s “convergence” plan from the 2006 elections, which Olmert won. Is anyone else looking at new-old options?

A. The Institute for National Security Studies at Tel Aviv University presented its own review of current options a couple of months ago. Varieties of unilateral withdrawal were one of them. So was unilateral annexation, beginning with the Olmert/Cabel variety and ending in annexation of all of Area C, or 60 percent of the West Bank, as Education Minister Naftali Bennett (Jewish Home) advocates. INSS also discussed extreme one-state solution options, ranging from a state of all its citizens to a state with two levels of citizenship that is reminiscent of apartheid.

INSS also of course mentioned the status quo. To my disappointment, the Institute’s researchers failed to recognize that what is today termed status quo is really the slippery slope we are slowly sliding down toward an unintended and unwanted one-state reality that will be both ugly and conflicted.

Q. Didn’t you coordinate a study of Israel’s options at the Jaffee Center (JCSS), the precursor of INSS, back in 1989? Are any of those options still relevant?

A. The recent INSS study, carried out in conjunction with a British think tank, provoked a collective public yawn in Israel. The Netanyahu government can depend on public complacency and on the primal fears regarding any two-state deal that were generated by the suicide bombings of the second intifada and by Hamas’s rockets and tunnels. Netanyahu can also rely on the public’s view of Palestinian intransigence as the reason for failure of the final status talks of 2000 and 2008, and--yes--on the absence in the eyes of a majority of the Israeli public of an attractive alternative proposal from the political left.

Nearly 30 years ago, our 1989 study played a pioneer role in stimulating public discussion of a solution for the Palestinian issue. Israel’s sole TV station at the time gave us top billing. Right wing members of Knesset came to discuss our ideas even as PM Shamir condemned the head of JCSS as a traitor. Things were different then.

Or were they? The six options we presented then seem all too familiar today. They were status quo, two states (i.e., negotiating creation of a Palestinian state), Palestinian autonomy, unilateral withdrawal from “Gaza first”, Jordanian-Palestinian federation, and annexation. The Jaffee Center assessed all six options and recommended that Israel consider recognizing the PLO (then the enemy with whom negotiations were a heretical notion, today Israel’s negotiating partner) and discussing a gradual process leading to Palestinian statehood. Sound familiar?

Almost all options we analyzed then have proven relevant. The Oslo accords of 1993 generated West Bank and Gaza autonomy. In 2005 the Sharon government implemented unilateral withdrawal from Gaza. A two-state solution has been on the global agenda for years. Today’s growing body of Israeli one-state advocates preaches annexation.

The only “option” we did not analyze 30 years ago was the current default: the slippery slope we are on.

Q. Finally, and apropos the JCSS “Jordan solution” of Jordanian-Palestinian federation, recent days have witnessed widespread public unrest in Jordan over economic measures. How does this affect both the Palestinian Authority and Israel?

A. Negatively. Jordan is in financial crisis, brought on at least in part by the huge Syrian refugee burden it has faced since 2011. The masses of demonstrators in the streets of Amman include many professionals and middle class persons severely affected by austerity measures demanded by the International Monetary Fund. So this is one more case of Arab state instability brought on by the Arab revolutions.

Both Israel and the West Bank-based Palestinian Authority need a stable Jordan: as a friendly buffer against the chaos of Syria and Iraq and the threat posed by Iran, as an active participant in the management of the Jerusalem holy places, and as a powerful advocate for a stable two-state solution that guards Jordan’s western flank. Fortunately, the demonstrators are not attacking the institution of the Hashemite monarchy. King Abdullah will presumably prevail and deflate the crisis as he has in the past.

Until the next crisis. The Jordan unrest is a timely reminder as to just how fragile and vulnerable the region is in the tragic absence of a viable Israeli strategy for Gaza, the West Bank, or both.