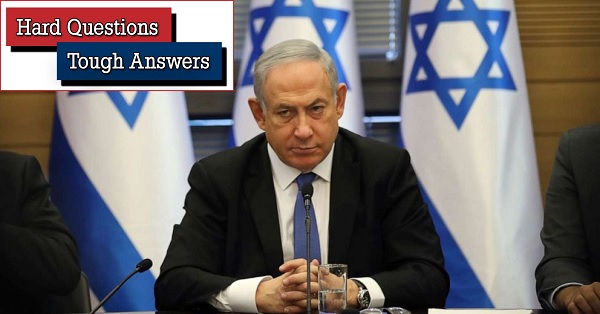 Q. Still no progress in forming a government? Heading for a third round of elections?

A. No progress. As of Monday, nine days remain before the Knesset is dissolved and new elections are scheduled. In a last-ditch measure, Likud PM Binyamin Netanyahu has reduced his condition for heading a unity government to an initial five-month term, after which Blue-White’s Benny Gantz would follow for two years. But Blue-White veterans like Yair Lapid and Moshe Yaalon who have served under Netanyahu and been fired by him, refuse to trust him to step aside after five months.

Note that there is speculation that Netanyahu’s new shortened five-month term request reflects his assessment that US President Trump’s “deal of the century” will be launched by then, awarding Israel the Jordan Valley. Netanyahu would promptly annex the Valley to Israel, including some 20 to 30 percent of the West Bank, with tacit US blessings. According to this scenario, this would enable Netanyahu to leave office in a blaze of ultra-nationalist glory that further prevents a two-state solution, thereby virtually assuring Israel’s future as an apartheid state.

Failing this option, however, the latest alternative avenue being explored is collecting 61 signatures so President Rivlin can provide a 14-day extension. More fruitless efforts to form a coalition would then follow. It’s all pretty pathetic. The entire country is being held hostage by an indicted prime minister who generates fanatic loyalty--or cowardly fear--among his ultra-nationalist right-religious mainstream base. As matters stand, a third round of elections in early 2020 looks very likely.

Q. Any ray of light in these grey times?

A. A few interesting things seem to be happening at this time of no functioning and authoritative government in Jerusalem. Were there to be a government with full executive authority, and were there to be a functioning coalition whose members, political parties, could threaten to leave it and trigger its collapse, these developments might not have been possible.

Thus, for example, Tel Aviv and surrounding municipalities like Ramat Gan, Kiryat Ono and Ramat Hasharon recently instituted bus and minibus public transportation within and between them on Friday night and Saturday, thereby breaking a status quo ban imposed by the religious parties from the emergence of the Israeli state. Last weekend’s pilot was so popular that its scope was doubled this weekend.

Normally (meaning the Israeli norm), the religious parties would threaten a major government crisis over this revolutionary (for Israel) step. But we’re already in a government crisis and there is no functioning government for them to threaten to leave. That’s why they also haven’t made trouble over Sabbath work (when there is far less disruption to commuter traffic) on transportation infrastructure projects like the new train to Jerusalem and a bridge over Tel Aviv’s Ayalon freeway.

But what is going on between Israel and the Hamas government in the Gaza Strip offers a glimmer of hope for something even more remarkable: a stable, long-term ceasefire, primed by genuine progress toward infrastructure development in the Strip.

Q. That would not have been possible under a fully-empowered government?

A. Doubtful. The trigger for the current round of optimistic development of infrastructure options was the brief flareup of violence between Israel and Gaza-based Palestinian Islamic Jihad a few weeks ago. We recall that Hamas remained conspicuously on the sidelines and Israel, after initially assassinating a renegade PIJ commander/troublemaker whom everyone was happy to be rid of, tried to confine its response to PIJ retaliation attacks strictly to PIJ targets in Gaza.

Had Israel had a more empowered prime minister and minister of defense it might have felt confident to expand the fighting. Instead, under the current circumstances the security community was better positioned to advise the government to exercise maximum restraint. And lest we forget, it is the IDF and the General Security Service that in recent years have been the biggest advocates of military restraint and economic largess toward Hamas.

In contrast, newly-appointed Defense Minister Naftali Bennet, like his predecessor Avigdor Lieberman, is a veteran hawk regarding Gaza. What we are currently witnessing is Bennet conveniently forgetting that he used to advocate reconquering and reoccupying the entire Strip. Instead he is accepting realities as explained to him by the IDF: there is no military solution for Gaza, nor can Israel impose a friendlier regime. But economic infrastructure “carrots” just might help calm things down.

(Bennet still has to huff and puff hawkishly about something, so he is now threatening not to return to Gaza the remains of Gazans killed in border fence clashes. When an Israeli official becomes obsessed with holding on to enemy corpses, thereby emulating Hamas, you know he/she has run out of options. Bennet is also asking the IDF to prepare for a more energetic attempt to push Iran out of Syria; if that happens, it could prove either more dangerous or more productive, or both.)

On the other hand, it must be noted that only Israeli right-wingers who seek to avoid close interaction with the West Bank-based PLO/Palestinian Authority regarding a two-state solution are likely to be willing to ignore it and negotiate separately, albeit indirectly via Egypt and Qatar, with Hamas. Technically, the PA still rules Gaza as well as the West Bank; under the Oslo Accords, which are still valid, all discussion of economic interaction must go through Ramallah. In reality, in view of the disastrous state of Hamas-PLO relations, this would mean no progress at all in any direction, political or economic, with Israel suffering the violent consequences.

Q. So what, specifically, is happening with Gaza?

A. Hamas’s avoidance of military action against Israel during the latest conflagration has served to leverage a series of interactive gestures. Hamas has prevented violent demonstrations at the border fence with Israel for three straight Fridays now, thereby ceasing this disruptive and escalatory dynamic after a year of violence. Israel is encouraging construction of two new hospitals in the Strip. Enhanced electricity delivery from Israel is in the works. Qatar and Egypt are being encouraged to invest, with Qatar continuing to deliver a monthly cash allotment of tens of millions of US dollars. Plans are being laid again, after a hiatus of years, to allow Gazans to commute to construction and farming jobs in Israel, thereby producing income for their families and generating a vested interest in stability.

Perhaps most spectacularly, major infrastructure and economic development projects are being promoted for Gaza from three geographical directions. The Trump deal of the century, if and when unveiled, will reportedly feature plans to develop infrastructure and sources of employment for Gazans on Egyptian soil, in northeast Sinai, south of the Strip. The elected leaders of Israel’s Gaza periphery settlements to the east and north, representing those Israelis who suffer the most from rockets and mortar attacks from Gaza, have unveiled a plan to construct industrial zones, a recycling center and a gas-powered electric power plant on the Israeli side of the Gaza border fence, for the benefit of Gazans. The Gazan commute to work in Israel would be simplified from a security standpoint by building these facilities along the fence, in which controlled crossing points would be built.

That accounts for the Strip’s southern, eastern and northern borders. A third initiative, long nurtured by veteran Transportation Minister (more recently Foreign Minister) Yisrael Katz, features an artificial island to be constructed in the Mediterranean Sea off Gaza’s west coast. The island would comprise infrastructure for the Strip’s two million occupants, including a sea port and possibly an airport, with Israel responsible for overall security.

Katz has finally found an Israeli defense minister, Bennet, who is interested and does not reject the island idea on security grounds as did his predecessors Liberman and Yaalon. The hawkish Katz argues that his island idea can be supported by everyone on the Israeli political spectrum: “The right likes it because it separates Gaza from the West Bank; the center, because it reinforces separation between Israel and the Palestinians; the left, for humanitarian reasons.”

Q. What could prevent these projects from reaching fruition?

A. A lot. First, they all create infrastructure to serve Gazans but from beyond Gaza’s borders. Note that no one is courageous enough to suggest building inside the Strip or along its coastline. Accordingly, the projects are subject to bureaucratic and political obstacles beyond the control of Gazans. Egypt may not like the idea of using its territory in northeast Sinai--which in any case currently harbors ISIS extremists--for the benefit of Palestinians, meaning non-Egyptians. Traditionally, Egypt’s attitude to Gaza is that it is Israel’s problem.

Then too, infrastructure solutions under Israeli control--along the fence or in the sea--could prove tempting targets for Gazan extremists. If an island naval port is abused for the smuggling of weaponry by Hamas, the Israeli security community will close it down.

That brings to mind a second obstacle. Hamas may be observing a tacit ceasefire in recent weeks and is even talking about a “tahidiya” or long-term ceasefire, but will it devote its energies only to the welfare of Gazans? Or will it take advantage of a ceasefire to build and stock more and better rockets? And toward what end: to deter Israel or, in future, to attack it? A Gazan arms build-up under cover of a ceasefire would be a red line for the Israeli security community.

Finally, if all goes well, who will pay for all this? Here everyone--Israel, the Trump administration, Egypt, Hamas--will look to the oil-wealthy Gulf states. Yet beyond Qatar, all the other Gulf states might be reluctant because Hamas is the Palestinian branch of the Muslim Brotherhood, their enemy. Besides, the West Bank-based Palestinian Authority, which is controlled by Fateh and which claims authority over the Strip under international law, will lobby them not to strengthen Hamas economically.

So this is not simple. Developing Gaza by working with Hamas, albeit indirectly, could at some point in the future actually be bad for Israel-West Bank relations and could further reduce prospects for a two-state solution. Besides, from Israel’s standpoint the vision of a peaceful, developing Gaza Strip could easily be sabotaged by a few Gazan hotheads firing rockets, or by Iranian incitement and incentives to Gazan militants to attack Israel.

Still, if all the interested parties don’t take advantage of the current situation to at least try, a renewal of serious conflict between Israel and Gaza is guaranteed.